I Accidentally Forced My Mom To Go To A Nudist Colony

I Accidentally Forced My Mom To Go To A Nudist Colony

I went in for the Lady's Leg SunDial, but I came out with much more. 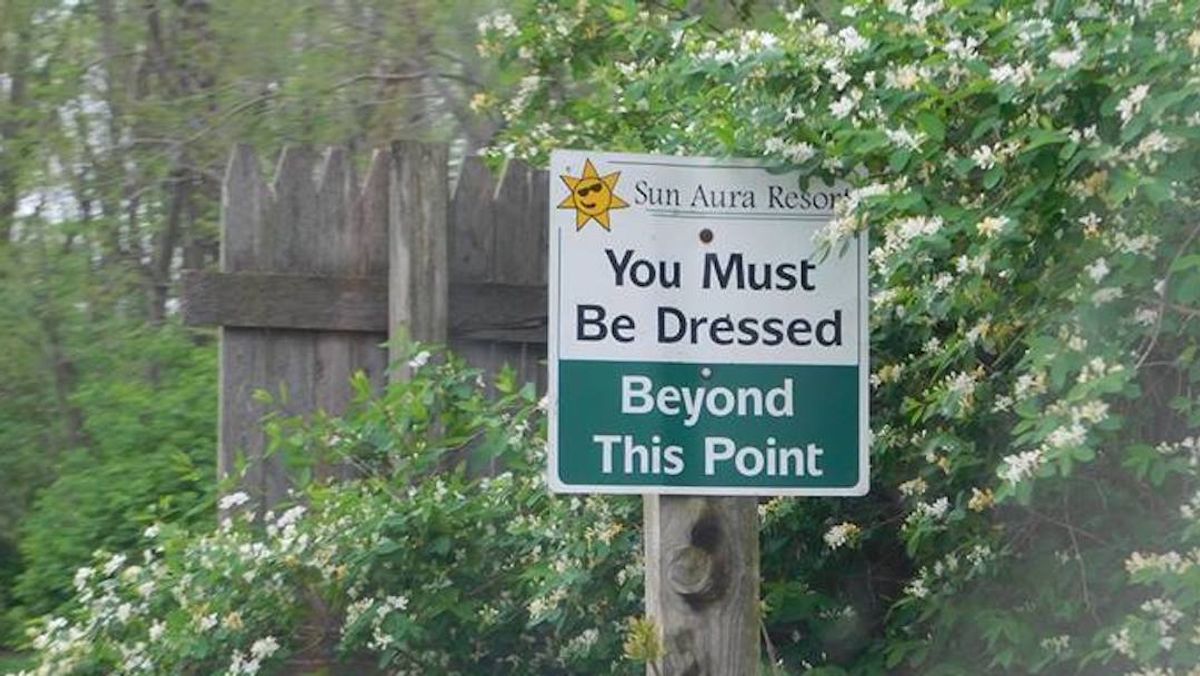 If you know me, you have probably heard this story before because it's definitely one of the best ones that I've got, but if not, let me set the mood. Thursday, April 28th, 2016, we set out of Denny's parking lot at 6 o'clock in the morning ready to face the twelve-hour road trip from Cullman, Alabama to Chicago for the National Scholars Bowl tournament.

My mom, my friend, and I were driving separate from the others, and because of this, I planned out places for us to stop along the way. However, none of the other places even compared to the excitement I felt for one place in specific.

I had used the Roadtrippers app to find spots a few weeks before, and when I found out that the world's largest lady's leg sundial was only six miles off the interstate in Indiana, I knew I had to go. I mean, come on, it's a huge sundial shaped like a leg!

So after making it through Tennessee, Kentucky, and a large part of Indiana, the Roadtrippers app sends me an alert that we are close. My excitement is through the roof by then, but I'm also slightly freaking out because the possibility that we are about to star in our own version of "Wrong Turn" is continuously growing the further we go.

I'm not kidding. I'm texting my friends in the other car, who went a different way than us, telling them where we are just in case we go missing.

It hardly gets any less sketchy when we finally arrive at the gates. There was a sign that said that the camp was 21 and up, but I didn't understand why since it was just a leg. This is most likely because I definitely did not do my research on this place. I was coming in and expecting to find this nice leg sundial, but boy, did I leave with a good story to tell at parties.

So we went into the camp and parked at the main office, feeling super uncomfortable and a little nervous since our signals completely dropped. My mom didn't want us to even get out of the car, but I insisted because I wanted a picture with this leg.

So we get out, and a man approaches us. I tell him that we had come to see the sundial, and he politely guided us to a huge, yellow leg located in front of a row of campers. We were briefly told the history of the leg and found out that it was built in 1969. He also made sure to point out that the only thing that we can take pictures of is the leg, which confused all three of us, but we went with it anyway.

Feeling like the best moment of my life had come, I took out my selfie stick and started snapping pictures with this gigantic sundial that was unfortunately under reconstruction at the time of our visit. I'm like doing all kinds of poses while my mom takes pictures of my friend and me when I see this creepy ticket booth with splashes of red all over it.

Knowing now that the Sun Aura Resort hosts an annual Halloween party, it makes sense, but at the time, I thought we were about to straight up get murdered.

So far, I had only seen a bunch of men, a creepy ticket booth with what looks like blood running down it, and campers lined as far as the eye can see. What else am I supposed to think besides "Oh my God, I'm going to die today"?

Showing my mom the cause of my worries, she quickly directs us back to the car, where I make sure to check the tires just in case someone had slashed them.

Quickly, my mom backed out of the parking lot, and we gave one final glance to the creep ticket booth and headed towards the gate.

That's when we saw it. The best part of it all.

"You must be dressed beyond this point." That's when it clicked. We couldn't take pictures of anything but the leg because there was a high chance that someone would be naked in our photos.

Come to find out, I did not do research in the least bit about this place because even on the Roadtrippers app, it said that the Sun Aura Resort was a clothing optional camp with attractions such as the "Panties tree" and a garden filled with phallic shaped objects.

Oh and I cannot forget that they were really proud of one of their campers, George, who God had blessed in a way that I'm glad I didn't witness.

So the moral of the story is to do your research before you go on a road trip or don't because it is one of the funniest things that's ever happened to me.