The end of Nate the Great. 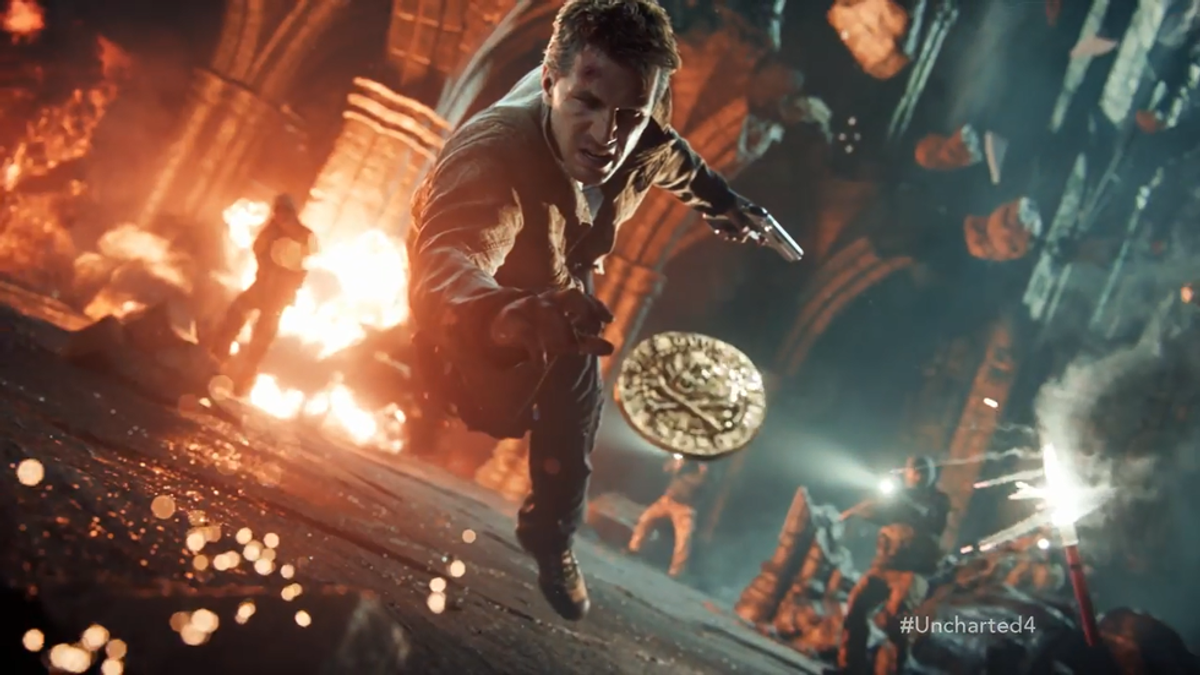 I’ve never played an Uncharted game before this one so I wasn’t entirely sure what to expect. But now that I have, I have to say, bravo! "Uncharted 4: A Thief’s End," by the remarkable game development team Naughty Dog, is incredible. The story follows the journey of treasure hunting great, Nathan Drake, whom you take control of, and his brother, Sam Drake as they travel across the globe in search of the lost treasure of the infamous pirate, Henry Avery.

Along the expedition you encounter treacherous terrains such as mountains, cliffs, and ancient ruins in which you navigate through in a procession of climbs, jumps, and rope swings to get from point A to point B. A big deal of this game gives you the feel of a daring explorer by constantly having you carefully think about where your next move should be, which is not always easy. The geographical terrains you encounter are often very complex.

Even manmade structures such as buildings and temples require a lot of thought to climb. The routes you take can prove to be much more challenging and unpredictable as you encounter fragile cliff sides that break upon your grip, falling rocks and boulders, steep slides down muddy slopes, cliff sides that require carefully timed rope swings to get across and much more. Fortune hunting ain’t a walk in the park. You gotta really channel your inner monkey to get through this one.

As you explore the game’s vast topography, you discover numerous puzzles such as symbol aligning on ancient mechanisms, grave searches, and explosive death trap planks that require careful thought. Often times, the ancient scriptures you find can help you solve the game’s puzzles by offering clues and maps as you move forward toward the lost treasure of Henry Avery.

Nathan and Sam aren’t the only ones looking for the treasure of the once most wanted man in the world. Along the way you encounter deadly militarist who offer a seriously intense experience. Just take a look at the intensity of the enemies here and you’ll see how incredibly challenging they can be to fight.

When you take cover from enemy gunfire and return fire, you get a real sense of combat and the mechanics used when fighting your enemies with nothing but your bare knuckles are incredible. The prison fight in the beginning of the game offers one of the most realistic fighting scenarios I have ever experienced in any game.

The game’s excellent gameplay is also supplemented with a superb story which isn’t surprising considering how breathtaking the story was in Naughty Dog’s previous title, "The Last of Us." The gamer becomes immersed in a game that feels like a cinematic experience.

One of the most notable moments in the game’s story happens in the beginning when Nathan believes that this brother was killed. It’s moments like that in the game that really add weight to the controller.

*Okay, end of spoiler. You can look now.*

The characters are also really likeable and often remind us of this as they exchange conversations during the game. One moment that comes to mind is when Nathan Drake tells his wife, Elena, how their travel in the jungle would make for a great article topic for her journalism, in which she replies: Will anyone even read it? –A feeling I sometimes get as an article writer myself. Nathan Drake’s witty and smart mouthy remarks also add to his likability.

The games use of tall grass that serves to hide from the enemies is just one example of the game’s realistic detail. The visuals in this game prove to be outstanding as you come across the vast sceneries of beautifully made landscapes.

The gameplay is very extensive, capable of having you spend up to twenty hours in one play through. It offers a variety of experiences whether that includes scuba diving in the ocean, running from explosive tombs, or playing the original "Crash Bandicoot" on the Playstation console. Yes, there are two parts in the game in which you play a course from another game. I was a little disappointed with myself when I couldn’t top the high-score on both instances but at least I made it all the way through the second time.

Although this was the first Uncharted game that I ever played, I’m happy to say that that the game’s ending feels very much like a proper ending to the series and the introduction to Drake’s daughter hopefully opens the door to a new franchise.

"Uncharted 4: A Thief's End" is a marvelous game. The story and gameplay is excellent and I would highly recommend this title. The journey of Nathan Drake has been an incredible experience, and I’m glad to see it end in fortune.