UNC vs. Duke: The Greatest Rivalry in Sports
Odyssey
CurrentlySwoonLifestyleHealth & WellnessStudent LifeContent InspirationEntertainmentPolitics and ActivismSportsAdulting
About usAdvertiseTermsPrivacyDMCAContact us
® 2023 ODYSSEY
Welcome back
Sign in to comment to your favorite stories, participate in your community and interact with your friends
or
LOG IN WITH FACEBOOK
No account? Create one
Start writing a post
Sports

UNC vs. Duke: The Greatest Rivalry in Sports

When it comes to college basketball, you can always expect the Tar Heels and the Blue Devils to put on a show. 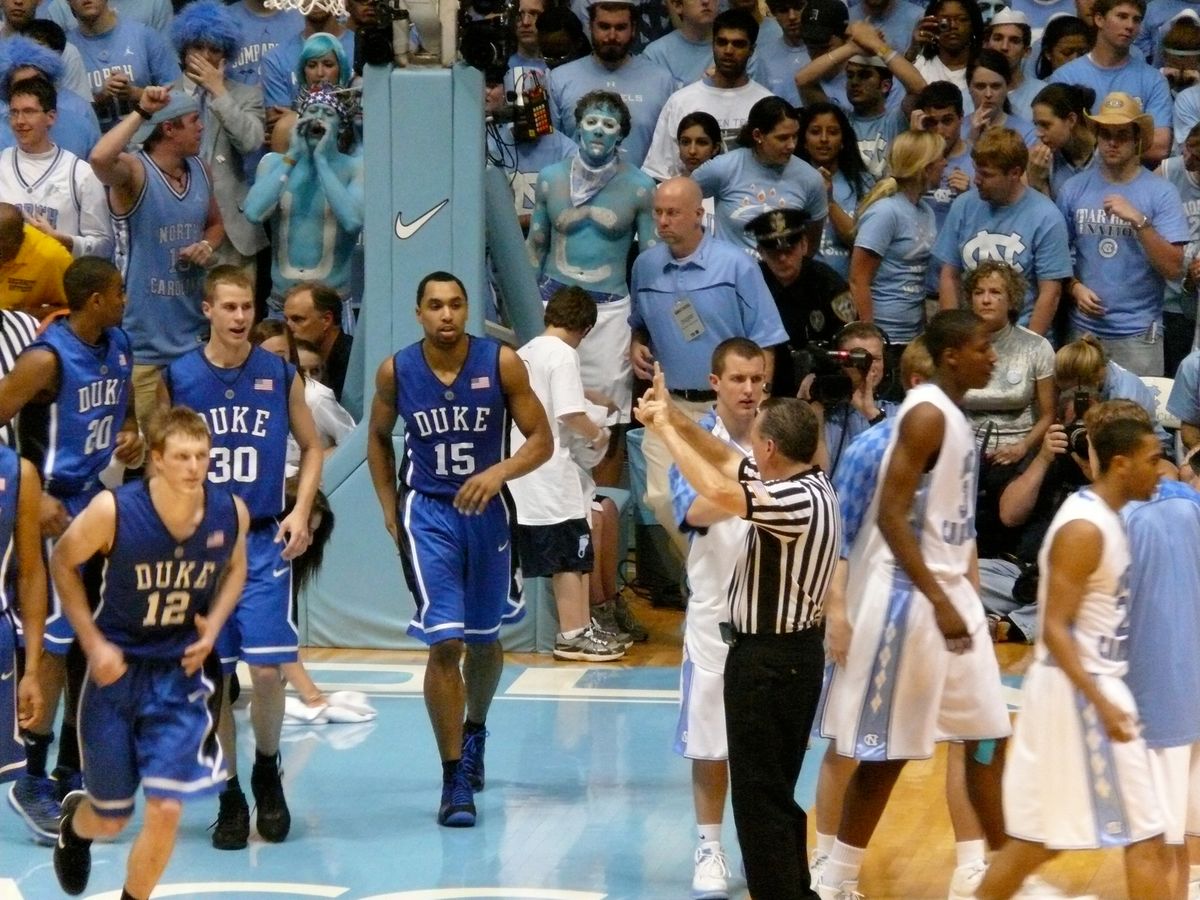 The NCAA Men's Basketball League is known for exciting and competitive games across the board, however, there are two teams that stick out. The University of North Carolina Tar Heels and the Duke Blue Devils are known for having elite programs. With UNC having 6 National Championships and Duke with 5, these teams bring tough competition to the table each year. This could be a major explanation as to why these teams are infamously known as being arch-rivals.

Beginning in 1920, the battle between the Tar Heels and the Blue Devils is considered one of the greatest rivalries in all of college sport's history.

10 miles separate these two universities on Tobacco Road, but the journey is more than that, as the matchup is a long-awaited event. Intensity runs through the blood of fans from both teams, as they feel there is only room for one team in North Carolina to triumph.

Though the rivalry is intense with every athletic team, college basketball is at another level. The two face each other twice in regular season play, and they always put on a show for fans. Students camp outside of the arenas (Dean Smith Center and Cameron Indoor) as early as one week before the games to show their excitement and dedication.

You never know what is going to happen when these two teams battle, as sometimes one team may win both games, or each will win one game. Sometimes home court advantage plays a vital role in a win, and sometimes one team disappoints the crowd and wins the away game.

The rivalry has been going on for years and will continue to make history in the world of college sports. There have been too many game-winning shots within the final seconds of the game to count, that leaves one opponent feeling breathless and the other ecstatic.

There have been cases in which these teams have faced each other more than twice during the season. Just last year, in the 2017 season UNC and Duke battled it out for the ACC title. Going into this game, each team had one win under belt winning at their respective home courts. Duke took home the win and the ACC title.

There have also been several cases in which one of the teams is ranked highly in the league, and one had a losing record. You can pretty much forget each team's record when going into these rivalry match-ups. It's usually a coin toss or a boxing match, where each team needs to throw a punch in order to stay alive.

The environment in these game settings is a catalyst for the performance of the players. Before their most recent matchup on February 8, 2018, in the last 100 meetings each team won 50 games and the difference in points scored was only 2.

Carolina was the victor in the most recent match-up, but you can expect another exciting game on March 3rd. Will North Carolina advance in the series 52-50, or will Duke keep it exciting and tie it at 51-51?

Nicole Marie Nigro
Individual Creator
6449
c1.staticflickr.com
Where to start...... Let me start with the cliche that life throws us curveballs and what we do with it is what counts.