Lack of Diversity in the Token Foursome Friendship Shows

From 'Sex And The City' To 'Girls,' Why Aren't TV Gal Pals More Diverse? 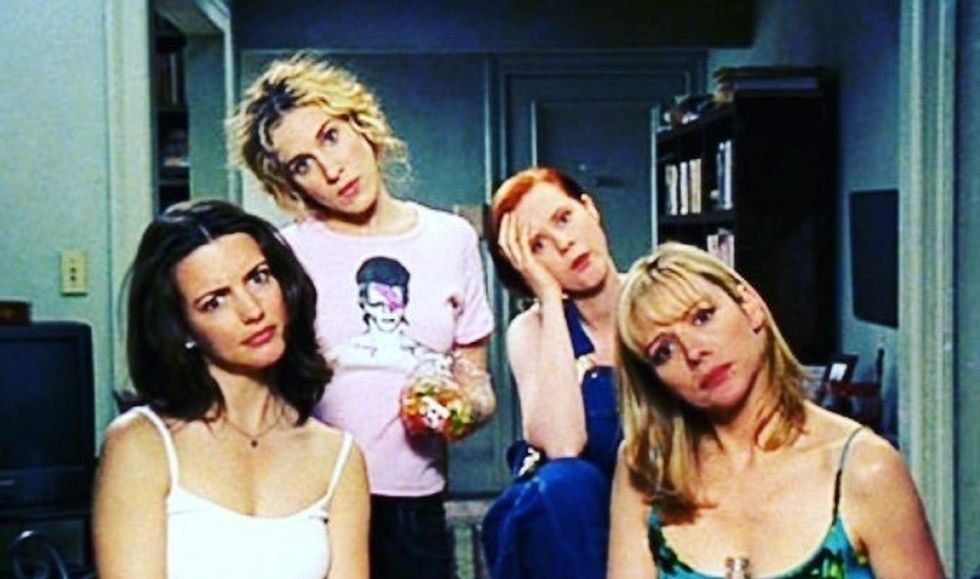 Although I've never been one to watch a lot of television, I spent a good chunk of this summer watching all seven seasons of the iconic TV comedy, Sex and the City, and I shamelessly relished every episode of the series. Although I was several years (decades, even) late to the Sex and the City party, I could tell that, at the height of its popularity, it must have been an empowering and novel expression of feminine sexuality and friendship. But amidst wondering if I was a Carrie, Miranda, Charlotte, or Samantha, I began to contemplate what the show would be like if today's rightfully heightened standards for diversity and representation had been implemented.

Beyond the casting of four white women as the series' four ingenues, it was apparent that the script hardly ever even introduced the four gal pals to women of color. One of the only featured women of color in Sex and the City was in the Season 3 episode, "No Ifs, Ands, or Buts." The conflict of this episode spurs from an African American woman named Adeena, who disapproves of the interracial relationship between Samantha and her brother, Chivon. She justifies her disapproval using the poorly written line, "it's a black thing." The fact that Adeena was the most well-developed woman of color in the entire series is pathetic.

Watching the series, I also began to draw the obvious parallels that exist between Sex and the City and Girls, another HBO series about four women in New York navigating the world of dating, careers, and friendship. Both series liberally depict female sexuality and female friendship. For this reason, they're empowering, but they don't depict much diversity in the process. This is, at best, odd considering that Girls was made as a series so recently. We've to lead ourselves to believe that people have become more aware of diversity and intersectionality since the days of Sex and the City.

But even with the progression of time and the progression of, notably, society's norms, the quality, and quantity of representation in each series is about the same: the main four girls are white and are all well off financially. And while showing the success of women is obviously something to have triumphed, it wouldn't deprecate the agency and strength of the characters to feature more socioeconomic diversity.

Although I truly do love and often commend Sex and the City and Girls, both series still go to show that some of the most seemingly empowering television shows for woman-identifying viewers are parables of white feminism in disguise. And far beyond race and class, there are many other social identities that go unaddressed or are poorly represented among the characters in each of these series.

Ultimately, Sex and the City and Girls both succeed in depicting female agency, creativity, body positivity, success, and companionship-- but who is to say that they actually succeed in empowering all women? Of course, there's also the issue of tokenism or the idea of making a cast diverse, but not out of an artificial obligation to be "politically correct" and without resorting to stereotyping as a means of characterization.

It's easy for us to say that we're more aware of diversity in our media, but we still remain relatively uncritical of segregated female friendships. It seems like the only time we ever see a diverse group of girlfriends in the media is a product of tokenism rather than of chance. To quote something America Ferrera wrote for Deadline Hollywood, "Tokenism is about inserting diverse characters because you feel you have to; true diversity means writing characters that aren't just defined by the color of their skin, and casting the right actor for the role."

Lena Dunham defended the lack of diversity in Girls by explaining that she wanted to avoid tokenism. While tokenism is obviously something that should be avoided, she instead opted to blatantly write her characters as "two wasps and two jews" (WASP being an acronym for White Anglo Saxon Protestant.) Dunham's blatant decision to make all of the main characters white before even beginning the casting process, then, was the problem. And while the four women of Sex and the City are all costumed as New York City wasps, the way the characters were written could have lead to diverse casting-- it just didn't happen when it came time for casting.

In any case, real groups of female-identifying friends look and act much different than the groups of female-identifying friends seen on TV. And whether the culprit is writing or casting, it's time to diversify our fun-loving groups of TV friends without taking a turn towards tokenism. And though this brings up a whole host of other issues surrounding inclusion and casting, I hope that the next iconic foursome of women-identifying characters we see take on life is more representative of the groups of girlfriends that are watching at home.

Related Articles Around the Web
diversity
Report this Content
This article has not been reviewed by Odyssey HQ and solely reflects the ideas and opinions of the creator.