Trump Is Not a Racist Bigot: A Millennial’s Perspective
Odyssey

Through thick and thin, i’m here until the end. 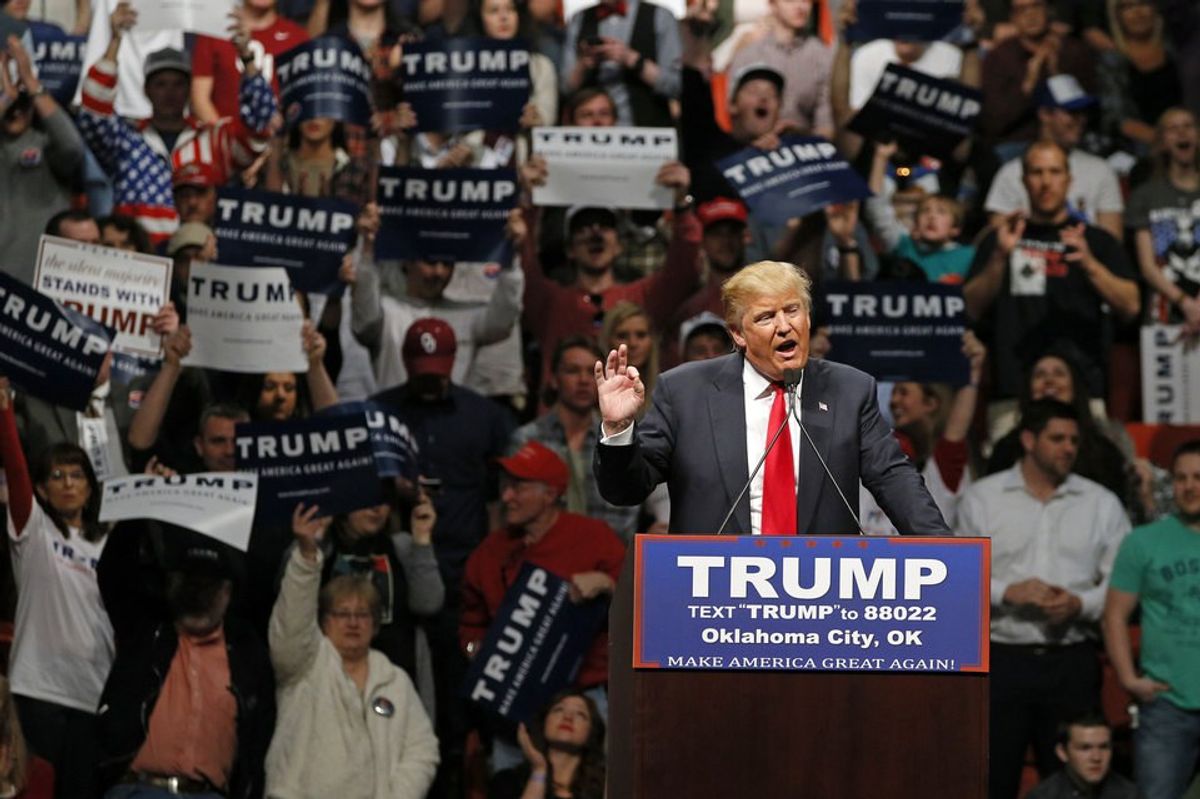 Who is Donald J. Trump?

Donald John Trump was born in Queens, New York on June 14, 1946. His dad was a builder and real estate developer. At age 13, Donald attended the New York Military Academy, and he became a star athlete and student leader by his graduation. Thereafter, Donald Trump attended Fordham University in the Bronx for two years before transferring to the Wharton School of Finance at the University of Pennsylvania. In 1968, he graduated with his degree in Economics.

While at Wharton, Mr. Trump joined his father’s real estate company, Elizabeth Trump and Son, and then In 1971, he took over his father's company. He renamed the company The Trump Organization and began casting his vision of excellence on Manhattan, New York City, and the rest of the world.

Donald J. Trump married Melania Trump January 22, 2005, and Trump is a father to five children. His oldest children Donald Jr., Ivanka, and Eric all hold Executive Positions at The Trump Organization; his middle daughter, Tiffany, recently graduated from the University of Pennsylvania where she received her Bachelor’s in Sociology and Urban Studies; and Trump’s youngest son, 10-year-old Barron, is fluent in Slovenian. Mr. Trump also has eight grandchildren; five from Donald Jr. and three from Ivanka.

Donald J. Trump holds his family in high regards. His wife is his lover and companion, and his children are his best friends. Trump even has a strong family policy of No Drugs, No Alcohol, No Cigarettes. In his Republican National Convention Acceptance Speech, he said this in regards to his family, "In this journey, I'm so lucky to have at my side my wife Melania and my wonderful children, Don, Ivanka, Eric, Tiffany, and Barron: you will always be my greatest source of pride and joy. My Dad, Fred Trump, was the smartest and hardest working man I ever knew. I wonder sometimes what he'd say if he were here to see this tonight."

Why Do I Support Mr. Trump?

I grew up on a pecan farm in Southern Oklahoma, and I learned at a very young age the importance of work. I worked for my grandfather who started with nothing and then built up his business through hard work and determination. I also learned nothing in life is free, and working hard is the best way to success. My family was active in church, and this is where strong pro-life values instilled in me. God blessed me with such a hardworking and loving family. I am thankful for everything I have, and I will not allow threats to my American dream anymore.

My support for Donald Trump came the moment I saw him riding down the escalator in Trump Tower to make his big announcement on June 15, 2016. I, along with a plethora of other Americans, am fed up with our current administration and the direction of leadership in our country. I am sick and tired of these Washington politicians running our country into the ground. We are trillions of dollars in debt; our jobs leave the country for places overseas; and we need an outsider to fix this mess. We need a job creator from the private sector, and Donald J. Trump fits the bill. He is everything Washington, D.C. is not.

I recently graduated from the University of Oklahoma with a Bachelor of Arts in Political Science, and I currently pursue a Master's in Education from the University of Oklahoma. Education is one of the most important issues in my life. I believe Donald Trump will support and help build up our schools. We must invest in the future of our country, and I believe Mr. Trump can and will do this for our children and future generations of Americans.

The men and women who stand on the line protecting our freedoms should be treated as first class citizens. Donald Trump talked about reforming the Veterans Administration, creating job programs for veterans, and getting our veterans the healthcare they deserve. He will make sure our military is fully-funded and ready to defend our freedoms at a moment's notice. Our military is on the back burner, and it is time for change.

Our healthcare system is broken. We must repeal and replace Obamacare. He gave a false promise with this healthcare reform plan, and insurance premiums sky rocketed. Mr. Trump will work with both sides of the isle, ensuring we get affordable healthcare reform helpful to all Americans.

Jobs and our economy are extremely important to me as well. What happened to our products saying “Made in the USA”? Our jobs leave the United States for countries such as China, Mexico, and Japan. We cannot let this continue. Donald Trump built many successful businesses. He knows how to create jobs. He will be the greatest jobs president of all time. I am ready for a businessman running our country.

Donald Trump is a worker. He worked hard building his empire. He, just like me and my grandfather, believe with hard work, you achieve greatness. He will work with both sides of the isle to get the job done, and honestly, he was already on both sides of the isle, and then he developed relationships with the other side. This is an asset, not a deterrent.

Since when did being against illegal immigration make you a “racist”? If you forgot, we have a border. You cannot be a country if you have no border. If you cross the border into the United States without a visa, you are not a citizen; you are an illegal immigrant. Mr. Trump proposed a plan to build a wall along our southern border in order to protect our citizens from the flow of illegal drugs into our country. He promised no burden on the American taxpayer because Mexico will pay for the wall. Once the wall is complete, it will have a giant door for people coming into this country legally.

I understand people have their concerns with the wall, but it is not used to divide our nation; it is for our own protection, and I believe wholeheartedly we have a fragmented immigration system needing a fix. However, I do not want the Washington politicians trying to fix what they promised to fix for decades. The border must be secure, and then we must pass comprehensive immigration reform. Donald Trump is the man for the job.

Since when did Donald Trump become “sexist”? Is it because he doesn’t support Planned Parenthood? If you believe that as truth, you're wrong. He publicly announced he supports Planned Parenthood, except for their role in performing abortions. If you have categorized women as single-issue voters, you’re wrong. Women care about a variety of issues. Trump treated women with love and respect for many years. He admires merit, accomplishment, and skill over gender.

The Trump Organization always had women in its highest ranks. Trump's daughter Ivanka stated, “He's one of the great advocates for women, and he has been a great example to me my whole life. He 100-percent believes in equality of gender and wholeheartedly has confidence in women to do any job that a man can do." I understand you may think he went too far in some of the names he called women in the past. He made mistakes, but he since apologized and corrected himself.

In addition, some people may be concerned with some of the comments Mr. Trump made over this campaign. Imagine if every breath you take and every move you make is recorded. The media does all they can do to make something out of nothing in order to hurt your image of Donald. Do you think you say a few harsh or stupid statements from time to time? I know I do, and thankfully, I surround myself with a group of diverse and intelligent friends who make me aware if I do or say something wrong. The same goes for Mr. Trump. He always surrounds himself with a room full of intelligent and compassionate people. Always remember everyone makes mistakes.

Before you paint this picture of Donald Trump as a racist bigot, do some research. Don’t judge a book by its cover. You should actually read what’s inside and not just the summary on the back. Its what’s on the inside that counts.

For far too long, a large sector of the voting block was silent, but thanks to Donald J. Trump, we are not silent anymore. The silent majority awoke, and we stand with Trump.

Family and friends, love me or hate me, but I’m ready to MAKE AMERICA GREAT AGAIN.