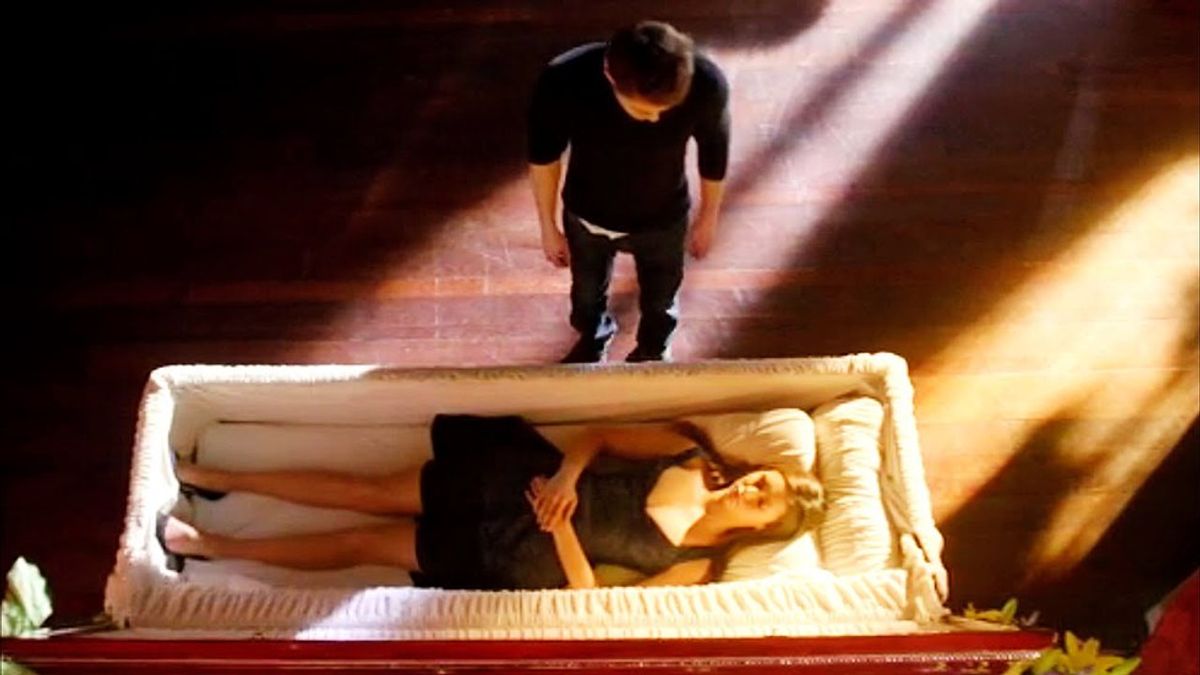 Have you ever watched a show, and you just know that they are about to kill one of your favorite characters? I have. And let me tell you, the amount of ugly, snot crying that I did at each of these deaths is actually a little pathetic. So here are my top ten saddest TV deaths, the ones that ripped my heart into a bunch of little tiny pieces.

You know it's horrible when you can see it written across the character's face that she's walking into death. Below, I'll include a clip of the scene I watched (language warning), and I seriously started tearing up just watching it again. My heart actually broke, because seeing her crawling away, for her life, just clicked. The moment I really cried was when the second gunshot rang out. Let me tell you, watching that episode for the first time, I flip flopped between thinking she's gonna die, and thinking she wasn't going to die. Still, it was a heart breaking death.

So I'm a sucker for lesbian couples; I honestly think they are so adorable. That, in turn, made this death exceptionally heartbreaking. Just how Emily nearly collapses after her mom tells her about Maya's body is enough to kill me a little bit on the inside with her. It's also some of the best acting I've ever seen. I couldn't even cry when I first saw it, I just stared at the screen in utter horror. Then I cried. Heh.

Okay, who didn't hate Shonda Rhimes for that one? I mean, come on! McDreamy?! You had to kill McDreamy?! This one really broke me into pieces because I'm a huge Grey's Anatomy fan. I'm not saying the rest of them didn't, but this one did a lot. I knew it was coming because it was spoiled for me, but I did not know how or when or what would happen, and after watching it, I was devastated. Poor Mer. This definitely won't help her dark and twisty life.

I'll admit, I wasn't a big SoA fan at first, but my stepmom got me into it. Any show that has a character commit suicide automatically has me in tears, because it's such a real thing that impacts so many people in this world. This one wasn't excused by any means, because I bawled just watching the clip of it, before I ever even watched the show. Ending a show like that is just.. Wow. The emotions.

Okay, so she isn't or wasn't actually dead, but I still cried, and she was sort of dead, so I'm allowing it. I've been obsessed with TVD since I read the books in high school, so of course, I hopped on the bandwagon and watched the show. I didn't expect to fall in love with it the way I have, and the fact that Season Eight is the final season is actually very bittersweet, but alas, I will always have the memories. Everyone saying goodbye to Elena is completely and utterly devastating for me. I feel like I grew with this characters, so this was a super personal death for me. Included is not an official clip, but a montage that I fell in love with.

First of all, Jeffrey Dean Morgan is actually my life. So when he appeared on Grey's Anatomy, I was completely shaken up. And then they killed him. Of course they killed him. They always kill the characters I love. His death was extremely heartbreaking, because he just got engaged, and just got a new heart and his whole life was going good, but NO. They killed him. I was so upset. For days, it was all I talked about to those who watched the show with me.

I realize that it's in the movie, and that he actually doesn't die, but since the movie was a TV Disney Channel movie, and he sorta disappears for a little while, it's kinda like dying, so I used it anyway. This one hit home, because I have an older brother and everything Alex says is so beyond true. I love my older brother, so if he disappeared into a tornado thing, I'd be devastated, just like she is. Also, shout out to Selena Gomez because I seriously think I'm in love with her.

Oh. My. God. Charmed was my childhood, so when Prue died, I was devastated all over again. I use that word a lot, devastated, but it's the only way to accurately describe how I felt. I have three sisters that I love more than anything in the whole world, so I honestly couldn't imagine that pain, just like the brother thing above. I recently binged all of Charmed on Netflix again and I cried, all over again.

As I mentioned in one of them above, this one impacted me because of the suicide. I struggle with depression, and I've also had loved ones lost to suicide, which causes me to start crying whenever it's involved with a television show. The first time I saw that episode, I cried so hard, and then I had to stop watching the show for a while because I was quite literally traumatized by it. Trigger warning.

No one saw Cory Monteith dying, and when he did, it broke the hearts of so many Glee fans, myself included. So when they came out with The Quarterback as a tribute to Finn Hudson, and a little bit to Cory Monteith, of course, I needed the tissues handy. Though they never gave him a cause of death in the show, it was still wonderfully put together and impacted a lot of people. Talk about emotional. Again, this isn't an actual death scene, it's a montage of the tribute episode.

So there you have it, folks. My top ten saddest TV deaths, and why they impacted me. Hope you had your tissues for that, because it's a tear-jerker!

Caitlin Marie Grimes
University of South Florida
851
Beyond The States