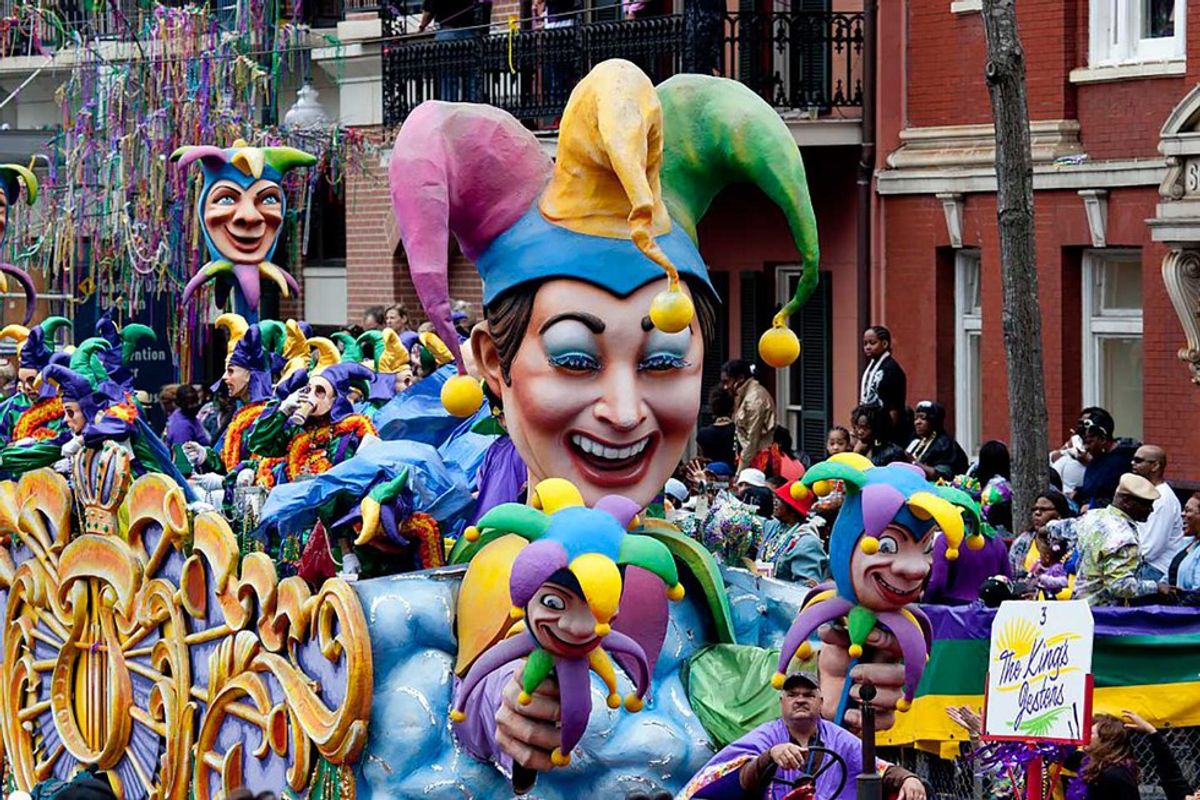 For any of you who aren't extremely experienced in Mardi Gras and want to get involved in this amazing cultural tradition or just want to understand what your friends are talking about, here are the top u03ru084yt vocab terms and definitions for Mardi Gras season!

Epiphany: This is a Christian feast on January 6. It celebrates the three wise men’s visit to baby Jesus. It is the kick off for all things Mardi Gras.

Lundi Gras: French for “Fat Monday.” It’s the day before Mardi Gras (Fat Tuesday). It originally celebrated the arrival of the king of Rex by boat, kicking off Mardi Gras.

Mardi Gras: French for "Fat Tuesday". This is the culmination of the Mardi Gras Celebration.

Ash Wednesday: The day when the celebrations stop. No matter how wild the party on Fat Tuesday, it all comes to an end at Midnight when Ash Wednesday Begins.

Carnival: means "farewell to meat." It is the temporary indulgence to the fleshly desires before lent. The carnival season begins on Three Kings Day/Epiphany (January 6) and ends on Fat Tuesday.

Ball: Almost like the one Cinderella went to! A Mardi Gras ball is an event the parades host prior to rolling. They usually feature presentations of the royal court, dancing and costumes.These are the perfect opportunity to get dressed up and have a good time!

Masquerade: This medieval tradition incorporates masks, dancing and royalty. Masquerade balls are commonplace during Carnival, and masks have become a symbol for Mardi Gras.

Endymion: is a major parade or super krewe that takes place on Samedi Gras. The parade features a celebrity grand marshal, exuberant floats and lots of throws. It’s named after a character from Greek mythology, cited as a shepherd, hunter or king.

Rex: is one of the most renowned parades. It’s held on Mardi Gras day. Rex is a Latin word that translates to “king.”

Zulu: Historically African American Mardi Gras day parade. Its origins can be traced back to the early 1900s when it was a benevolent aid society. Its signature throws are hand-decorated coconuts.

Floats: Lavishly decorated trailers or trucks that represent one subject related to the parade's theme that year. Each crew dresses to compliment the parade theme or float theme.

Krewe: is the group of people who ride in, create, fund and execute parades. The first use of the term is believed to be by the Mistick Krewe of Comus in the beginning of the 19th century.

Royal Court: refers to honored members of a krewe. This usually includes a king, queen, grand marshals, dukes, maids and more. Court members are often presented during the parade’s ball in an elaborate fashion. These are coveted positions, and there are often years-long waiting lists to become a king or queen.

Mardi Gras Indians: African Americans who dress in Native American regalia such as headdresses and elaborate suits, adorned with feathers and beads. These secretive tribes march in parades, but never announce when beforehand. Allegedly, the practice is meant to pay tribute to the Native Americans who helped out slaves who fled to New Orleans.

King Cake: King Cake: is a festive cake made of Danish dough, cinnamon, glaze topping, colorful sprinkles, complete with a plastic baby figurine. The baby is meant to represent Jesus and commemorates the Christian holiday Epiphany.

Flambeaux: comes from the French word for “flame.” Before the days of electricity, slaves or free men of color would carry these large torches in parades to provide light and warmth. The tradition continues today despite the omnipresence of lights.

Doubloon: is a common Mardi Gras throw. They are large coins, usually made out of aluminum and painted flashy colors.

Moon Pie: is a dessert sandwich made of chocolate, graham crackers and marshmallows. They became a common throw during the 1950s.

is a Cajun French saying that means “let the good times roll.” It’s become a mantra of Mardi Gras throughout the years.