Three Tips For The Best Jell-O Shots Every Time
Odyssey

Three Tips For The Best Jell-O Shots Every Time

Whether you like your jell-o shots strong or weak, using these key tips will have you and your guests saying "mmm." 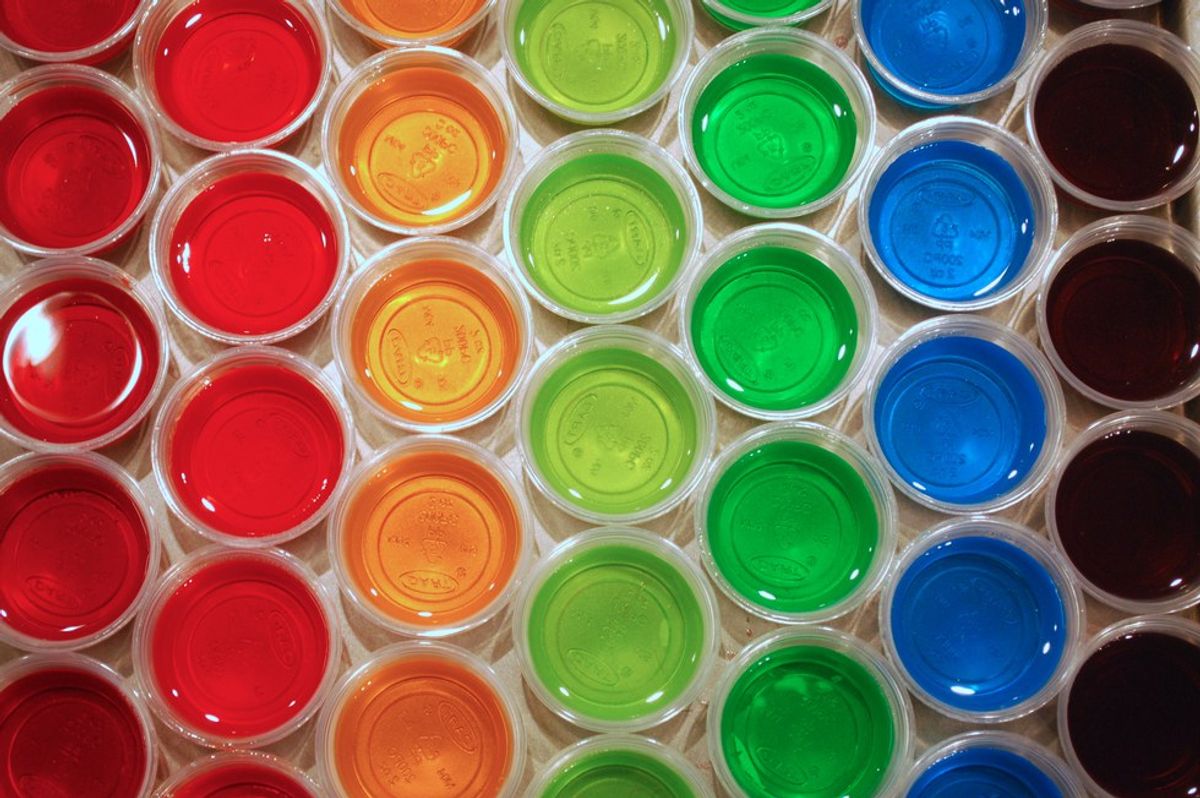 With Halloween a little over a month away—and the alcohol ban plaguing the CofC campus—now is the perfect time to talk about jell-o shots.

I love jell-o shots. I love how versatile they are, how creative you can get with them, and how easy and fast they are to make. What I don’t like about jell-o shots is that every time I encounter them at a party or a bar, they taste like bitter lumps of burning jelly. I’m going to assume that a lot of people have had this same experience and have perhaps written off jell-o shots because of it.

The key to making tasty jell-o shots is to focus on flavor over the amount of alcohol. That doesn’t mean your shots have to be weak. It just means you can make strong jell-o shots that taste good and that your guests want to eat.

Whenever you make jell-o shots, I highly recommend buying disposable plastic cups from H&L Asian Market in North Charleston (for those of you who drive) or order them from Amazon here. Why should you spring about $10 for these? Because they make pouring, storing, and eating the shots a zillion times easier. Also, each cup is 2 ounces, so there’s no risk of accidentally feeding someone 8 ounces of liquored-up jell-o in a red party cup or on your mother’s nice dishware.

After you’ve purchased your handy little containers, follow these tips to make stellar jell-o shots. For those interested in just the recipes, jump to the bottom of this article.

Figure out your ratios.
Most jell-o shots are made with a 1:1 ratio (1 cup boiling water, 1 cup alcohol, typically vodka), which (for me) is too strong. If you’ve ever had a jell-o shot that was really tough to swallow, it was most likely made with this 1:1 ratio (and probably cheap vodka).

Although the 1:1 ratio is strong, I occasionally use it for certain recipes. When I make fuzzy navel shots (my favorite), I use 1 cup of water, 3/4 cups of peach schnapps, and a 1/4 cup of Triple Sec.

Make your jell-o shots with schnapps.
I use that 1:1 ratio for the fuzzy navel shots I just mentioned because I make them with schnapps. If you’re using schnapps—anything made by Dekuyper—you’re using fairly weak liquor (15%). It’s okay to go for the full 1:1 if you’re using liquor that’s 20% or below. For liquors within the 30-40% range, experiment with ratios to see what tastes good. For anything 40% or over (vodka is the go-to for most jell-o shots and tends to be 40%+), be cautious with the 1:1 ratio even if you like that strong, bitter taste. It’s REALLY easy to accidentally overeat jell-o shots!

Make your jell-o shots with flavored, premium liquor.
I know we’re all poor college students, but if you’re making shots for a party, spring for a bottle of flavored, premium liquor. If you do decide to go with lower-end liquor, just make sure it’s flavored. Flavored liquors are sweeter and will make your jell-o shots taste better. Also, flavored liquors enhance the fruity flavors of the gelatin, which is great if you’re making a cocktail jell-o shot.

If you’re super poor, but want to be super fancy by purchasing premium liquor, I recommend buying mini bottles of whatever flavored liquor you need.

Mini bottles contain somewhere between 1.5 ounces to 2 ounces of liquor and typically cost $1-$3. Mini bottles of Smirnoff are about $1, so if you plan to do a lot of different flavored shots, or you’re just experimenting, buy these.

If you don’t know already, there’s a phenomenal liquor store on East Bay Street called Pence’s Liquor and Wine. They have, by far, the best selection of mini bottles out of any liquor store on the peninsula. I highly recommend Pence’s for all your good time needs because, aside from their awesome mini bottle selection, they have a really good liquor selection in general. Their prices are also low (the only place cheaper to buy your liquor is Sam’s Club).

Practice responsible drinking habits!
It’s really easy to eat a lot of jell-o shots when they’re extra tasty. Be aware that, unlike cocktails and beer, jell-o shots contain a lot less liquid and fewer calories, so there’s no full belly to stop you from consuming a ton of alcohol within a short period (seriously. You could eat like five or six or twenty jell-o shots in five minutes).

Recipes:
Follow the directions on the gelatin box, but replace the cool water with your desired liquor(s). All recipes here are given with a 1:1 ratio. Adjust your ratios as necessary using water/sour mix/soda/juice/etc. Get creative!