This Is Just the Beginning
Odyssey

This Is Just the Beginning

A series of nationwide protests have enforced a universal message: Love Trumps Hate. 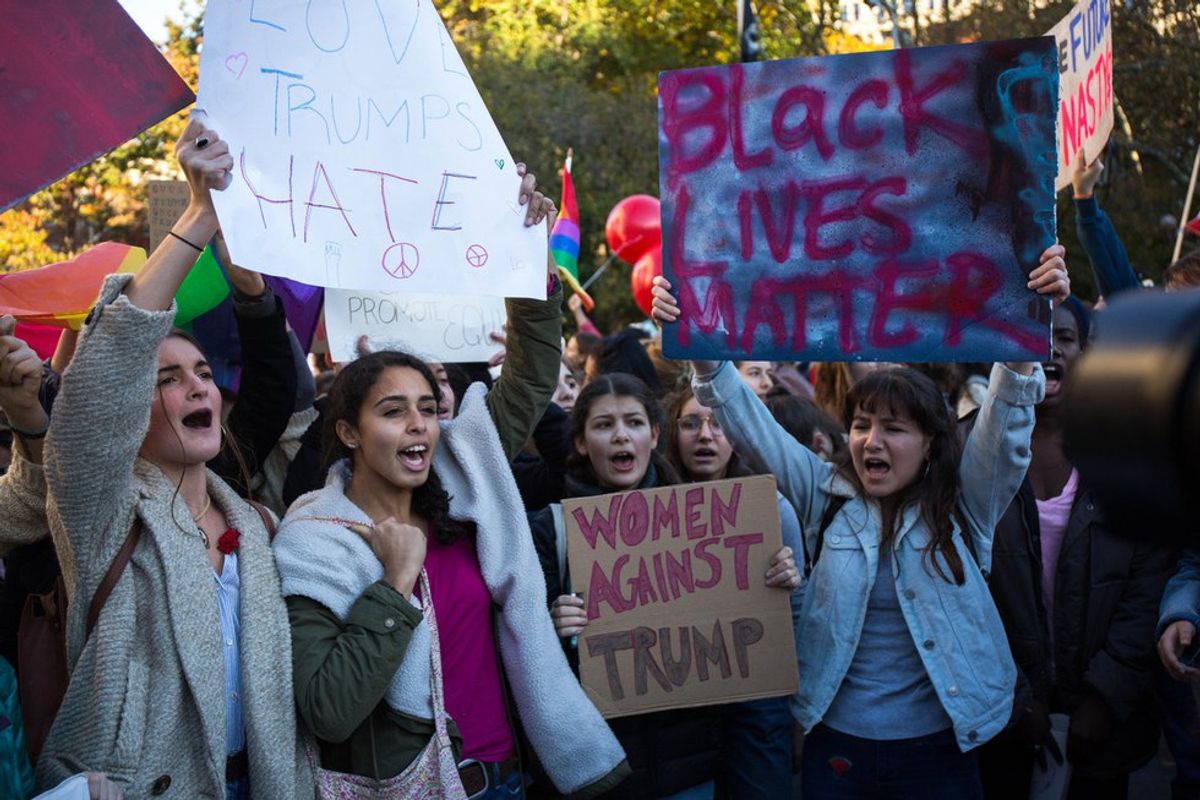 Donald Trump is the President-elect. Donald Trump will become our next president. But following this, fear and uncertainty has sprung across the nation. There have been protests in major cities that have been occurring for days. Such cities as New York, Dallas, Denver, Atlanta, Los Angeles, Kansas City, New Orleans, Boston, Chicago, Nashville, Orlando, Seattle, and Washington D.C. have experienced these protests.The "Not my president" slogan has broken out across the protests, among others like: "No Trump! No KKK! No racist USA." Additionally, "Love Trumps Hate" signs are seen within the crowds of passionate protesters, and several Trump effigies have been burned along the way.

In New York, which started on Wednesday, thousands of protesters have filled streets in Manhattan as they made their way to Trump Tower. In Washington Square Park, on Friday, crowds gathered and chanted encouraging words to each other. Protesters labeled it a "Love Rally". It was organized by Sydney Miller, who hoped to emphasize support for "targets of Donald Trump's hate speech," including "Muslims, women, those who have disabilities, latinos/latinas/latinx people and everyone else" that Donald Trump has openly put down. More chants arose such as: "Say it loud, say it clear: refugees are welcome here", "Hey hey, ho ho, climate change is not a hoax" , "Gay rights are human rights", "Black lives matter", "Our body, our choice", and "We reject the President-elect." While the "Love Rally" was a more positive and family-friendly protest, others didn't have that vibe. Nonetheless, all protests are fighting for the same overall cause: to show their fear and stand for their rights.

Similarly, in Chicago, an estimated 1,800 people gathered outside the Trump International Hotel and Tower chanting. Other protests, containing hundreds of people, occurred in Seattle, Philadelphia, and Boston on Wednesday night. On Thursday night, 4,000 protesters assembled in Portland. While mostly peaceful, it took a turn when cars and windows were vandalized. On Friday, there was a shooting. More protests are still occurring around the country, displaying the true intensity of peoples' feelings.

Many criticize the protests, calling the millennials who participate "crybabies", and when they don't get what they want-- they whine and protest. I want to say to these critics: you are not listening. Why don't you actually listen to what the protesters are saying? People are scared and are standing up for their rights, which they believe will be taken away. Another thing to note is: if you are white and privileged, you have no right to criticize protesters. You don't understand what they are feeling. People of color, LGBTQ+, Muslim, women, and more groups are terrified for what the future holds. It isn't a secret that Trump's whole campaign has encouraged hateful divide and prejudice against the groups of people mentioned above. There is proof of Trump supporters saying vile and vulgar words targeting women, people of different races, and ethnicities. In the New York Times' video by Erica Berenstein, titled "Unfiltered Voices From Donald Trump's Crowds", people were recorded saying "Muslim is not a religion, it's an ideology", as well as using the N-word to refer to President Obama. More vulgarities are said about gay people, immigrants, and women. And many of these words are stemmed from what Donald Trump has said.

These attacks are perfect reasons for protest. I find these protests beautiful--how victims of Trump's harsh and targeting words are uniting and fighting together. In the midst of more racial, gender, religious, and LGBTQ+ divide--the protests show how people want to change the fate of the future. I don't condone fighting fire with fire, the vandalism and violence should not be the answer. However, peaceful protest is absolutely acceptable and a valid response.

Let's not go back in time, reliving the times of Jim Crow and segregation. Let's not allow women to feel inferior and be more vulnerable to sexual assault. Let's not act hostile towards people of different religions. Let's not be xenophobic, for immigration is what built this country.

Let's stand for our rights. Let's unify and fight for our futures. Let's love each other.

No matter what, though, we must all remember that love trumps hate.