Tomi is not the kind of role model I'm looking for. 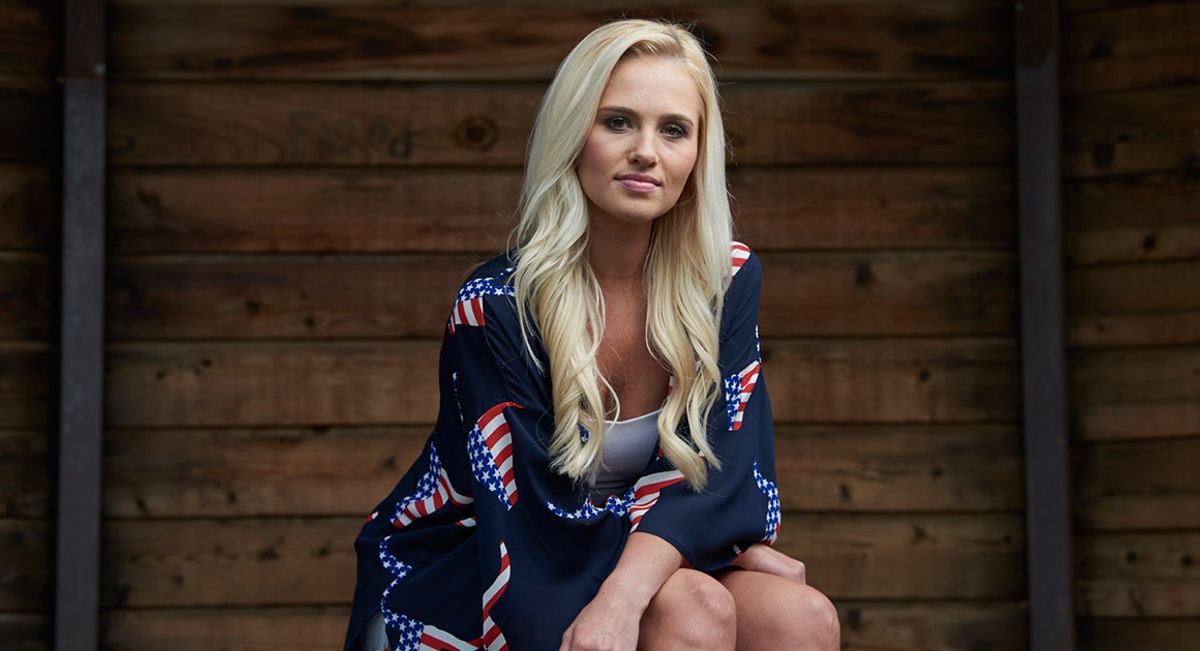 'I recently discovered an article entitled "Tomi Lahren Is The Role Model American Women Don't Want To Admit We Need," and while I firmly believe that each person in this great nation is entitled to an opinion, I would like to firmly disagree with this statement.

This statement is not only problematic, it's disrespectful to the many, many women that we can look up to that actually represent American women in a positive and uplifting light. Tomi, to me, is nothing more than a hateful conservative political mouthpiece.

"I personally think that Tomi Lahren is one of those women who is overlooked and under-appreciated by the female population because she supports President Donald Trump. But again, regardless of your political party, Tomi Lahren is someone who little girls should be looking up to and told about."

I believe, regardless of political affiliation, we should look up to women because of their character. Trump supporter or anti-Trump, conservative or liberal, we should always pick role models based on what kind of person they are.

Sadly, I believe the political world has turned Tomi into a hateful, rude, and unapologetically discriminatory version of herself that personally, I would never ever want my child to grow up looking up to.

Tomi expresses her political views in a way that doesn't just address issues, but it addresses people. First and foremost, she targets specific audiences that she hand-picks to tear down. She's a bully, someone who seeks out and devours those who have differing opinions and are trying to fight for what they believe is right.

Like I said before, everyone is entitled to an opinion, but Tomi's opinions oftentimes cross the line between authoritative and authoritarian, and I don't believe that's role model worthy.

There are ways to express opinions without hurting other people, without purposefully targeting audiences that are so obviously supported by left-wing voters. She seeks out issues that are so very dominantly left and tears them to pieces, referring to their supporters as "snowflakes," and that there are no "safe spaces" in the world.

Anyone who watches her videos knows the type of aggressive and oftentimes rude rhetoric that she uses to describe these issues.

"Tomi graduated from the University of Nevada, Las Vegas with a B.A. in broadcast journalism and political science in 2014. Lahren interned for Republican Congresswoman Kristi Noem - serving as the first intern for Noem's Rapid City office, hosted her own show called Tomi on TheBlaze, and currently working for Great America Alliance, all while only being 25 years old."

Her resume up until The Blaze is very impressive, and I congratulate her on her successes. However, through her show, she took her Bachelors degree and used it to push an aggressively hateful agenda on the internet. This got her fame and views, which I cannot contest (honey, get your coin), but at what cost?

It's what you do with that degree that matters, and so she decided to yell into a camera about liberals on the internet. How fascinating. Truly revolutionary. What ever did we do before Tomi expressed her unbelievably biased and hateful opinions on the internet?

"Why then do we tear down the woman who is doing exactly what you march for, just because they support someone that you don't? Tomi Lauren embodies everything that you marched for."

She literally opposes the institution of feminism openly, and only supports the side of feminism that has benefited her personally. She makes fun of women's marches. She name drops women who oppose her ideals CONSTANTLY.

This part of the article honestly enrages me. It's not about the fact that she supports Trump, it's the fact that she literally does not care about women's issues that American women fight for every day. Reproductive rights, transgender rights, racial issues, they are all women's rights and a big portion of intersectional feminism.

Sure, we're all happy that first and second wave feminism brought us voting and ability to work alongside men, but women today have many struggles that Tomi herself has never had to deal with, and therefore she always has something rude to say about it. Do I want to follow the ideals of someone who tears other women down?

No. She's doing the same thing that you claim others are doing to her.

She is not doing what I would march for. She's gained fame, fortune, and a cult following, but has done none of it with any moral integrity that I would stand alongside.

"Tomi is the perfect role model for all little girls who dream of really being able to do whatever they want when they grow up. Tomi represents all woman whether you like it or not, and I am all for having strong, outspoken, REAL, and opinionated women getting what they want, and not giving a damn what anyone else thinks. Aren’t you?"

Katherine Johnson, an alumna of WVU, defied all odds in her time by being not only one of the first African-American women to graduate from this wonderful institution, but she literally calculated the trajectory of the Apollo 11 mission to the moon (and many others) by hand.

Ruth Bader Ginsburg was the second woman to be appointed Supreme Court Justice of the United States and has been serving in that position since Bill Clinton was in office. She was born in the 1930s and grew up in a time when women were never offered opportunities like this one.

Malala Yousafzai was shot in the head by a Taliban gunman when she was exposed for fighting for young women's education rights in Pakistan. She now attends lectures at Oxford University and was named the youngest Noble Prize laureate winner. A bullet to the head wasn't enough to silence her fight against injustice.

Laverne Cox was the first transgender woman to appear on the cover of TIME magazine and uses her ever-growing fame to advocate for trans rights.

Sylvia Plath used her writing to express the innermost workings of her own mind, broadening our understanding of mental illness and making it less taboo.

Maya Angelou is a beautifully talented poet and author that has inspired women and girls around the world to write to their heart's content.

So yeah, there are plenty of role models for our young women of the future that aren't Tomi Lahren, and I think they deserve a bit more credit than what you're giving them.