Yazidi Love, And The Importance Of Faith And Community In The Face Of Unimaginable Persecution
Odyssey

Yazidi Love, And The Importance Of Faith And Community In The Face Of Unimaginable Persecution

The resilience in these people is palpable. 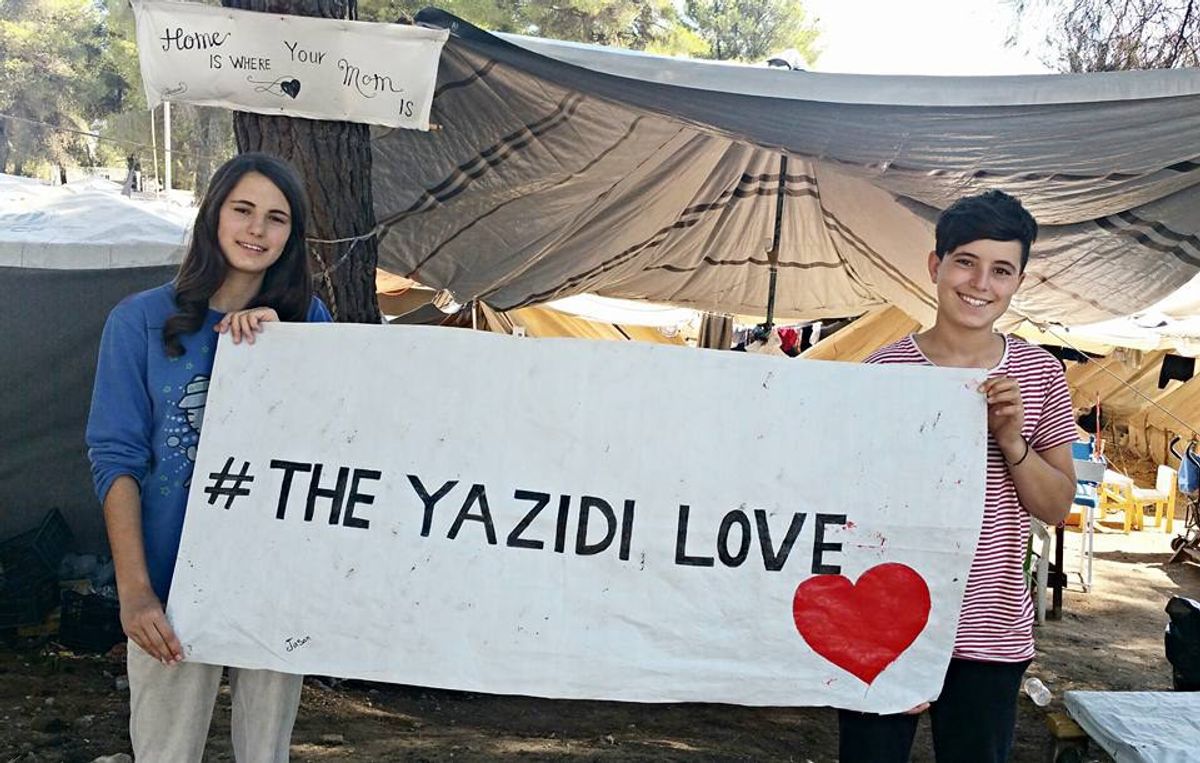 If you read the news to any degree, you are at least somewhat privy to the crisis afoot in Syria and Iraq. Images are constantly circulating of the terrorizing warfare that has engulfed the area at the hands of corrupt governments and religious extremists. Early this summer, I had grown exasperated by this news and felt compelled to use my energy to aid in the crisis in whatever way I could. I sent in an application to a European volunteer program, and before I knew it, found myself working at Ritsona, a refugee camp in Greece. During my time at Ritsona, I filled my ears with the stories of the residents willing to share, and, I hope, came together with them in a shared humanity. I have never been more in awe at witnessing the full capacity for human strength.

The resilience in these people is palpable.

Among the 600 people living beneath the trees in a remote area of Greece, I became acquainted with a family known as the Yazidis. I was moved by their sense of familial love in such a large group of 28. Each member of the family is bright-eyed and kind, the odds of which are slim, no matter where you are. I came to find that ‘Yazidi’ was actually the ethnoreligious group to which they belonged, not their last name, which I, in my ignorance, had assumed. Furthermore, I learned of the immense persecution and plight of these people, astounded that I had not known.

Yazidis have been a persecuted minority for centuries, and are an ancient group historically occupying Northwestern Iraq, as well as a large group in Syria, before persecution by the Ottoman Empire. The Yazidi religion, a monotheist, Gnostic, belief system, differs from most surrounding, and therefore beholds a minority group. There are less than 500,000 Yazidis; their future is unknown.

In August 2014, ISIS initiated the Yazidi genocide, a monstrosity resulting in the abduction of Yazidi women, massacres, and the fleeing of thousands. The genocide, additionally known as the Northern Iraq Offensive, utilized sex slavery as a war tool, and, according to a UN report, left 5,000 Yazidi civilians dead in August of 2014 alone.

Salim Noah is 26 and has the kind of charismatic confidence that is magnetic, inspiring to those in his presence. He used to live in Baadre, Iraq, but I met him in Greece, living with 27 of his extended family members in a refugee camp. Salim is a Yazidi refugee, who graciously took the time to share some of his story with me.

Salim (center) and two other residents at Ritsona refugee camp

On August 3, 2014, a “dark day,” ISIS invaded and barred Salim’s hometown and surrounding areas. Militants separated families, seized valuables, and then asked for those willing to convert to Islam. They took the men who had refused to the sides of the villages and shot and killed them.

“More than 35 mass graves have been found in some Yazidi villages, but we expect there are more because other Yazidi villages are still under ISIS control,” Salim lays out the reality before me. Some people fled to the top of Mount Shingal, and stayed without food or water, hundreds dying of malnourishment and thirst. Salim dictates the persecution of the Yazidi women in particular: “Yazidi women are suffering, dying million times daily,” referencing the repeated rape they endure, as they are enslaved by ISIS militants, bought and sold for 5-10 dollars.

Salim’s family hosts 11 siblings, four of which are married, with five children between them. A few of his family members were able to provide the $3,500 per person to be smuggled out of Iraq before he and the remaining relatives had to deal the smuggler their house. They were promised to reach Serbia, and embarked in February from their home to Istanbul.

After one day, they were among the 89 packed on to one bus and sent to Edirne, a city near Turkey’s border with Greece and Bulgaria. Without any light to guide them, they were lead through a forest, clutching to infants and what little personal belongings they had. Initially told that it would be a half hour trek, it was soon exposed that it was to be over five hours, through mountains and over rivers. The smugglers told them that due to freezing temperatures, most of the babies would likely not survive. Salim’s family did not want to risk this, so they tried to call the Turkish police, but to no avail. One of his sisters was crippled by pain due to a kidney infection; Salim feared for her life. Salim was able to reach one woman who spoke English and send her their GPS location, but no one came to them.

“They didn’t care.” Salim recalls the moment that shook him the most,“…when I saw my brother slap his nine-month-old son to check if he was still alive.” They tried again and again to make a fire, but freezing rain refused it. Five hours of suffering and panic went by, and a group had hailed a car, of which the driver called three busses for the refugees. “We started running to the busses to survive,” wrote Salim. Teary-eyed, Salim walked his sister, still doubled-over in pain, to the bus, which simply took them the four hours back to Istanbul.

There were five more brutal tries to cross in to Bulgaria. Then, it was decided that they were to try to instead go to Greece by boat. The first try, they got out to the middle of the sea, but were then turned around for fear of nearby police. The second, they had to turn around because of an issue with the motor. The third and successful try got them to the Greek island of Lesbos. Three days later, they heard rumors that the Greece-Turkey border closed. The family spent one week on the island, went to the port for two days, and then were bussed to Ritsona refugee camp. Salim and his family members lived there for seven months, until he, his parents, and six of his siblings finally relocated to Saint Nazaire, France. His cousin and family were smuggled in to Germany, three of his siblings and their children are in a house in Greece, and one family member is in the Skaramagas camp. He writes, “My family is committed to staying together, but we will never be able to return to Iraq.”

After conveying all the above information to me, Salim asked me if there was anything more that I wanted to know. I was so grateful for his openness, and amazed by the strength in his story and willingness to share. I reflected on the members of the Yazidi family I had come to know, and their radiant sense of community. I wanted to know if there was a secret way, an enlightened understanding in the people that kept each and every one of them so especially compassionate and resilient, against so much pointed persecution. I asked what his faith meant to him, through all of the injustice he has had to endure. He replied:

"I'll tell you something to be honest with you.

I'm not religious, but I love Yazidi people, and even if I wasn't Yazidi,

and someone asked me what religion I would want to be,

I would say 'Yazidi.'

They are the most peaceful people ever --

We as Yazidi can't hate anyone;

We cant hurt anyone. We love life.

The Yazidi love cannot be measured."

I suppose that is the secret; this "Yazidi love,” being the true embodiment of how community and love can combine to be a protective force, through even the most unimaginable hell.