The VP Candidate We Didn't Want, But Got Anyway
Odyssey
CurrentlySwoonLifestyleHealth & WellnessStudent LifeContent InspirationEntertainmentPolitics and ActivismSportsAdulting
About usAdvertiseTermsPrivacyDMCAContact us
® 2023 ODYSSEY
Welcome back
Sign in to comment to your favorite stories, participate in your community and interact with your friends
or
LOG IN WITH FACEBOOK
No account? Create one
Start writing a post
Politics and Activism

The VP Candidate We Didn't Want, But Got Anyway

And yeah, we're still going to vote for them. 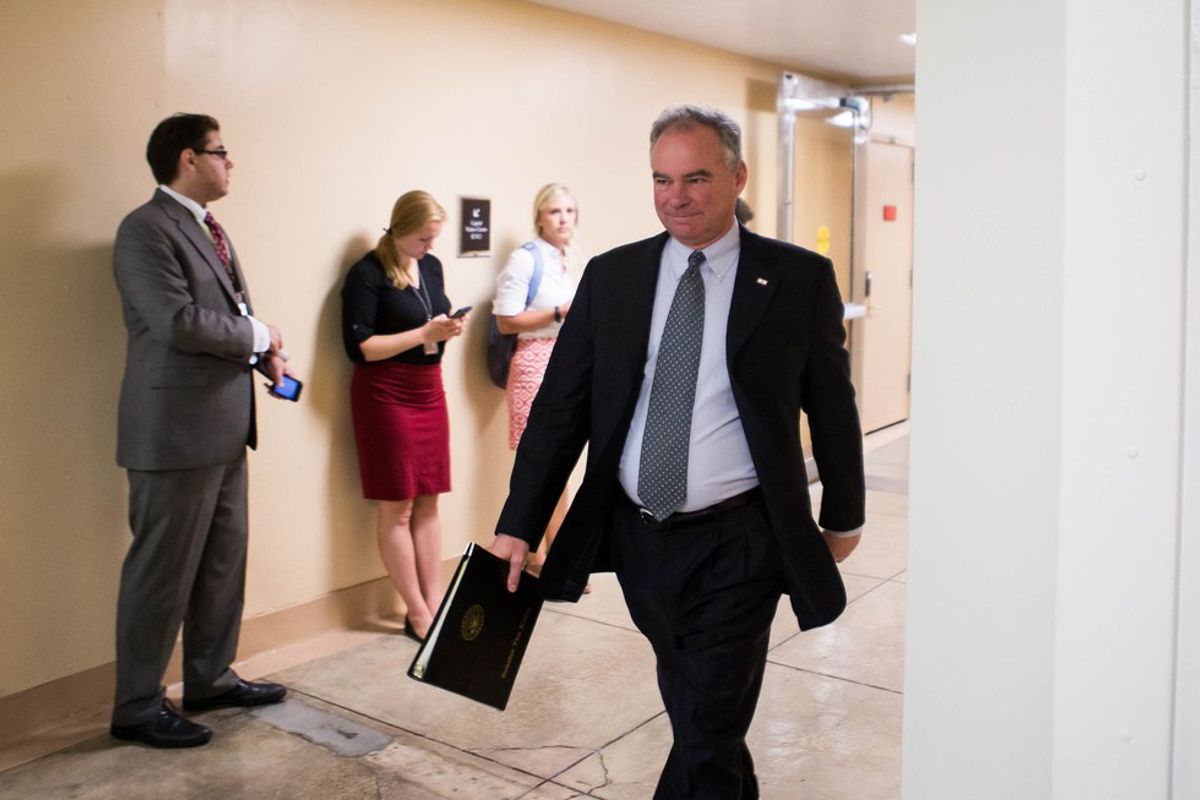 At the very end of the Friday news cycle, the presumptive Democratic nominee for president, Hillary Clinton, made the long awaited announcement of her running mate. Her pick? The former mayor of Richmond, Virginia, former governor of Virginia and current Virginia Senator Tim Kaine.

Senator Kaine is 58 years old, white, a Roman Catholic, straight, and married with three kids. He graduated from the University of Missouri and Harvard Law. He's been in politics since 1994. And while he's a qualified candidate for Vice President with experience at many levels of government and a current member of the Senate Foreign Services committee, his selection disappointed at least half of those who voted in the Democratic primary.

Kaine is qualified, few will dispute that, but he is also a middle-of-the-line Democrat who supports the Trans-Pacific Partnership trade deal and isn't tough on banking. If you missed it in the opening paragraph, he's from Virginia, a swing state, and more importantly, a state with a Democratic governor, who will pick his replacement. While that is a plus, as it gives Democrats a better chance of taking back the Senate, it's not the only thing that should be considered. Kaine's most distinguishing characteristic seems to be his ability to speak Spanish, which many talking heads seem to think will help with Hispanic voters.

Yet progressives are disappointed: of all the candidates Hillary Clinton could have selected, Senator Kaine is about as far from what they wanted as she could have gotten without being a Republican. He's, to use his own word, "boring."

Most of the left desired a VP pick more like Senator Elizabeth Warren (D-Ma), whose fiery defense of the middle class and scathing attacks on Wall Street have made her the left's darling. Sanders supporters felt betrayed when she finally endorsed Clinton in June, but her presence on the ticket would have signaled that Clinton recognized the progressive wing of the party and was willing to work toward them from her position as a more moderate candidate. That she would have been a second woman on the ticket was also attractive prospect; an all-female ticket would have strengthened the image of this being a historic campaign.

Other names of the short list favored by progressives included Senator Cory Booker (D-NJ), who would have been the first African-American vice-presidential nominee, or the Labor Secretary Thomas Perez, who would have been the first Latino nominee for either office. Although being from a minority group was not a requirement from the progressive wing of the party, it was something many thought would help Clinton, especially if she chose a Latinx vice-president. While Clinton's lead among African-Americans is strong, with NBC's most recent poll putting Trump at 0 percent with black voters in Ohio and Pennsylvania, there is a definite chance that Hispanic and Latino votes will simply elect not to vote in this election. If they choose not to turn out, Clinton could lose the election.

The only people this pick seems to be appealing to are white men, centrists who might find Donald Trump and Mike Pence too extreme. Yet the pick alienates the left, making it more likely that disenchanted supporters of Bernie Sanders, who were greeted with this unpleasant news on Friday, will choose to support Jill Stein, or one of the other third party candidates. They might even go for Trump, who attempted to reach out to them during his convention speech Thursday night. So while this is a 'safe' choice and Kaine is likely to do well if something were to happen to Clinton, it could cause her problems if her low-risk choice ends up driving voters away from the Democratic party.

As a progressive myself, as someone who voted for Sanders in the primary, Clinton's choice is disappointing. While I knew that Senator Warren was an unlikely VP pick, I had hoped that someone of her ilk would be chosen, to show that Secretary Clinton's commitment to the values of the left is strong. I knew she was a centrist, but I had hoped she would reach out to the left wing of her own party -- and to the independents who tend to vote Democrat -- in order to show that they -- that we -- are welcome.

Yet her pick is assumptive. It assumes that those on the left, the Democrats and Independents who voted for Sanders, will vote for her regardless of who her vice presidential choice, because the alternatives are either a third party candidate that seems unlikely to get enough votes to even make a difference, or Donald Trump.

Unfortunately for any pragmatist, it's the right assumption. I'm with her, if only because being with her is the only way to get a liberal justice on the Supreme Court and to uphold the rights and regulations that I consider essential. Like my right to choose what to do with my own body and my right to clean water that is protected by the regulations in the Clean Water Act. As the so apt song of the end of the RNC said, "You can't always get what you want." At the very least with a Clinton-Kaine ticket, we'll get what we need.