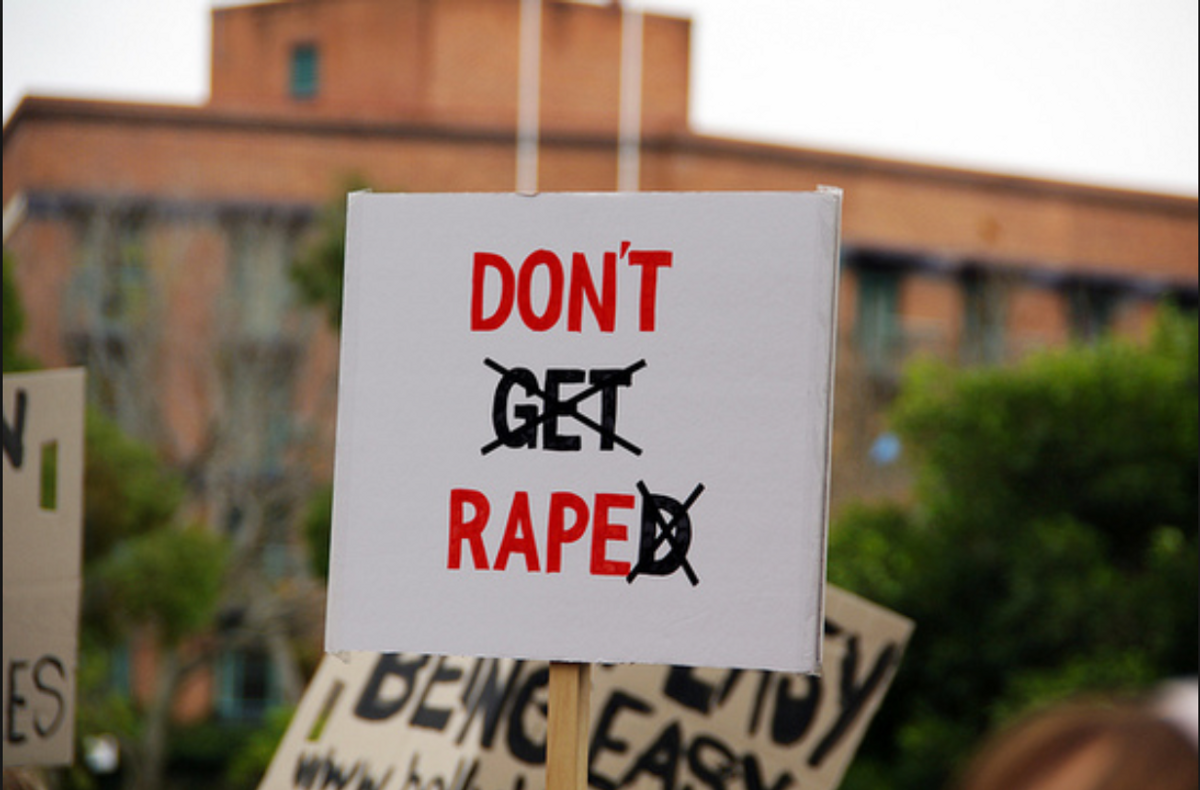 It blows my mind that to this day people struggle with speaking about one of the most prevalent issues in our generation and society. And that word that so many people get choked up on is "rape." Say it with me, r-a-p-e, rape. It is defined as unlawful sexual intercourse or any other sexual penetration of a sex organ without the consent of the victim. The key words here that you need to grasp are "any sexual penetration" and "WITHOUT the consent of the victim."

I recently sat down to watch a documentary on Netflix called Audrie & Daisy and barely made it through the first half hour without tears welling up in my eyes. It absolutely disgusts me that we live in a world where women are still questioned about their encounters of sexual assault because legislators, mayors, and juries are concerned about "ruining a young man's future career."

Have you ever thought about how sexual assault affects the victim? Besides the fact that their insides have been forcibly penetrated and in most cases they have been physically abused? Do you have any idea the mental and psychological effects that has on a human? And especially a young person in today's day and age? A society where there is so much pressure to be nothing but "perfect" and happy day in and day out.

Roughly 31% of rape victims develop PTSD over their lifetime following their assault versus the 5% that non-victims of any other crime experience. That is a 26% difference. Some of the many other mental illnesses known to develop in rape victims include depression, anxiety, and suicidal thoughts. All of which are debilitating illnesses that leave victims feeling hopeless, worthless, and greatly decreases their ability to function in their daily lives.

I'm not here to throw statistics at you; I'm here to give a voice to victims who are often so scared to share theirs. Rape isn't specific to just women, don't get me wrong. Many men have witnessed these horrific experiences as well. I'm here to get down to the nitty-gritty and that is the fact that you need to STOP criticizing victims and BLAMING them for what has happened to them.

Don't you think if your daughter, friend, neighbor, hallmate, cousin could have prevented being sexually assaulted against his/her own will and strength they would have? But see, she didn't have that option. They had another forcible human taking action against without their consent and sometimes without them even being coherent. And why? For their own pleasure. For them to be able to go back to the boys and say they got "laid." Or feed their own egos and desires at the expense of someone else's mental and physical well-being.

The even more concerning point is that so often these victims feel powerless because they have seen so many cases and reports been dropped simply because people chalk it up to "it's her fault she got that drunk", "you can't put a young man in jail when they have their whole lives ahead of them", "yes, I have seen the medical records but for right now it is merely here-say."

Well, here's my response. When a young woman with a torn hymen shaking from fear sitting in front of her assaulter with tears in her eyes tells you that she has been raped, LISTEN. God gave you ears for a purpose, use them. No human being should have to witness such horrific events just to be silenced because they're scared that they are going to be blamed for something they couldn't even control. They shouldn't have to be worried that their case will automatically be dismissed just because there isn't photographic evidence of her lying unconscious, naked in bed. She has to live with the memory of it for the rest of her life already.

I hope that this article makes you uncomfortable. I hope it makes you think. I hope it makes you aware. And I hope it helps you educate your sons, daughters, friends, and children that CONSENT is needed, rape is a CRIME, and that they have a VOICE. This unthinkable has been too prevalent in society and I have seen the direct effects of it too many times to sit back and not address it. I beg you to not be a bystander but take a stand and use your voice #fightback.