The "Reset" Had Nothing To Do With Putin
Odyssey
CurrentlySwoonLifestyleHealth & WellnessStudent LifeContent InspirationEntertainmentPolitics and ActivismSportsAdulting
About usAdvertiseTermsPrivacyDMCAContact us
® 2023 ODYSSEY
Welcome back
Sign in to comment to your favorite stories, participate in your community and interact with your friends
or
LOG IN WITH FACEBOOK
No account? Create one
Start writing a post
Politics

The "Reset" Had Nothing To Do With Putin

Clinton gets attacked for trying to reset relations with Russia. Here's why she shouldn't be. 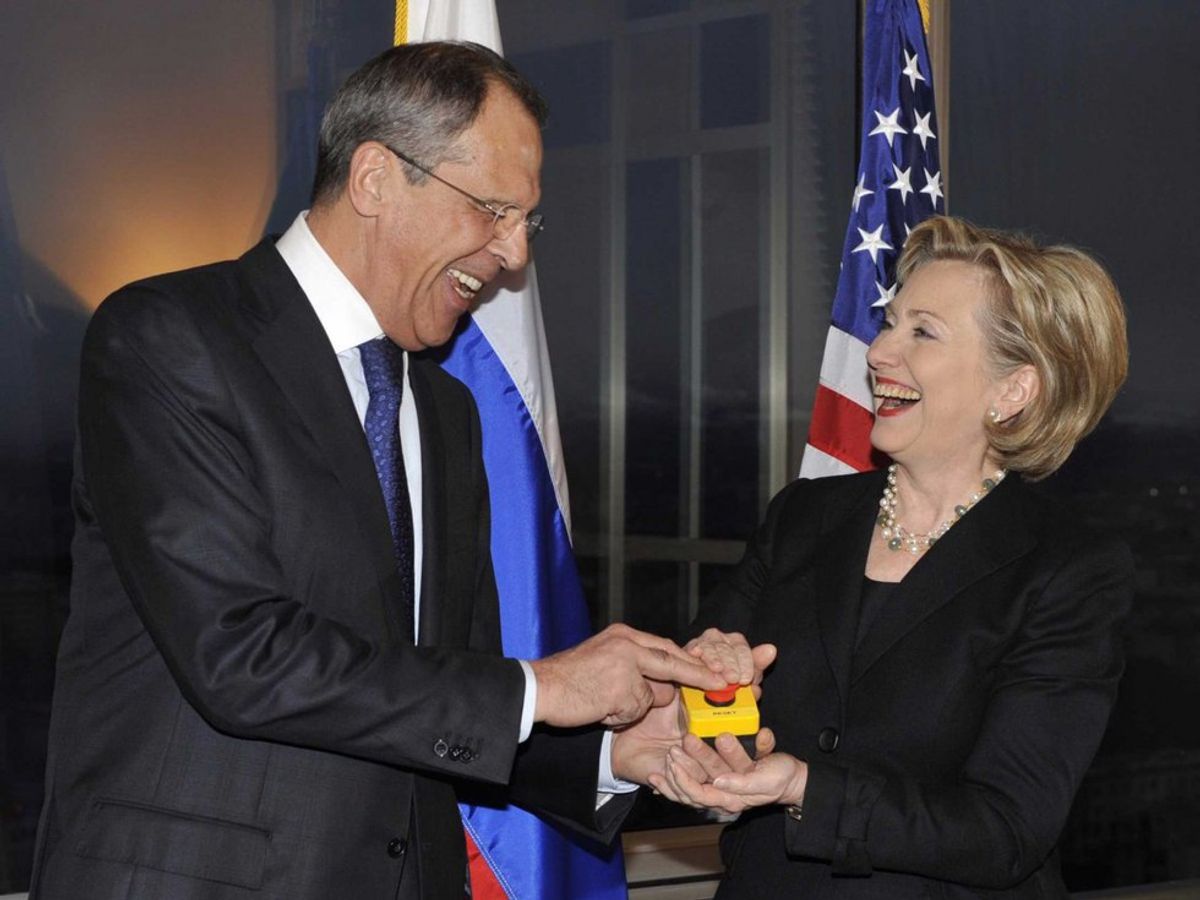 One consistent attack on Hillary Clinton involves her time as Secretary of State. Specifically, it involves the "reset" of relations between United States and Russia.

In 2009, Hillary Clinton presented the Foreign Minister of Russia with a reset button.It made headlines because the Russian word on the button meant "overcharge" instead of reset. It was supposed to be a visual representation of the new policy track the U.S. was seeking with Russia. The basic idea was that the U.S. and Russia share a common interest. It no longer needed to be a zero sum game; working together the U.S. and Russia could find outcomes beneficial to both countries. It was an attempt to develop a multidimensional relationship that was about more than simply controlling weapons but was rather based upon economic and social ties. The reset policy intended through integration to make Russia are responsible stakeholder in the International System.

It was initially successful, which few will tell you these days. After 18 years of negotiations, Russia finally joined the WTO. Bilateral trade increased, and the two nations began cooperating on issues concerning space, health, science, the environment, and energy. Most of the GOP is fixated on what Putin has done since 2012, and they blame President Obama and Secretary Clinton for a diplomatic strategy they believe failed, and failed dramatically.

What they seem to ignore, is that Vladimir Putin was not the President of Russia when the reset occurred. Rather, Dmitry Medvedev was in charge.

Russia has a constitution just like America does, and within that document it says a president may serve only two consecutive terms. Putin was elected president in 2000, and in 2008, his two terms were up. As Putin is a dictator who clings to an illusion of democratic legitimacy, he stepped aside and did not run for reelection as president. Instead his prime minister took the seat.

Although many view Dmitry Medvedev as a puppet of Vladimir Putin, he was far more pro-Western than his predecessor. Medvedev visited America, meeting with leaders of the tech industry, including Steve Jobs, who gave him an iPhone 4 the day before it came out to the rest of the world. He also visited Twitter headquarters, where he created the first ever government channel. This trip was a part of Medvedev's focus on modernizing Russia's economy, especially its tech sector. Russian-American relations grew under Medvedev because he differed from Putin.

When the GOP and the Media mention 2009's reset policy, they speak as if it was a bad idea from the get go. They speak as if Putin's actions since his return to the Presidency were inevitable, that Clinton and Obama should have known that when they tried to improve relations with Russia, they would turn into what they are now, a neo-Cold War atmosphere with a cyber-war. Yet that isn't the case. The 2009 reset was an attempt to take advantage of a new leader with a positive attitude about the west. And it worked while Medvedev was in power. During the 2011 Libya crisis, Medvedev and Putin had a rare public disagreement, when Medvedev did not instruct diplomats to veto the no-fly zone resolution in the Security Council.

Medvedev exists, and the Media especially should remember to mention that the 2009 reset occurred while he was in power. While there are many things that one can criticize Hillary Clinton for, the attempt to reset relations with Russia is not one of them.

Not that that will stop any Republican intent on stopping Hillary Clinton, but one can hope that facts might prevail with the rest of the country.