The KD and DWade Dilemma

The KD and DWade Dilemma 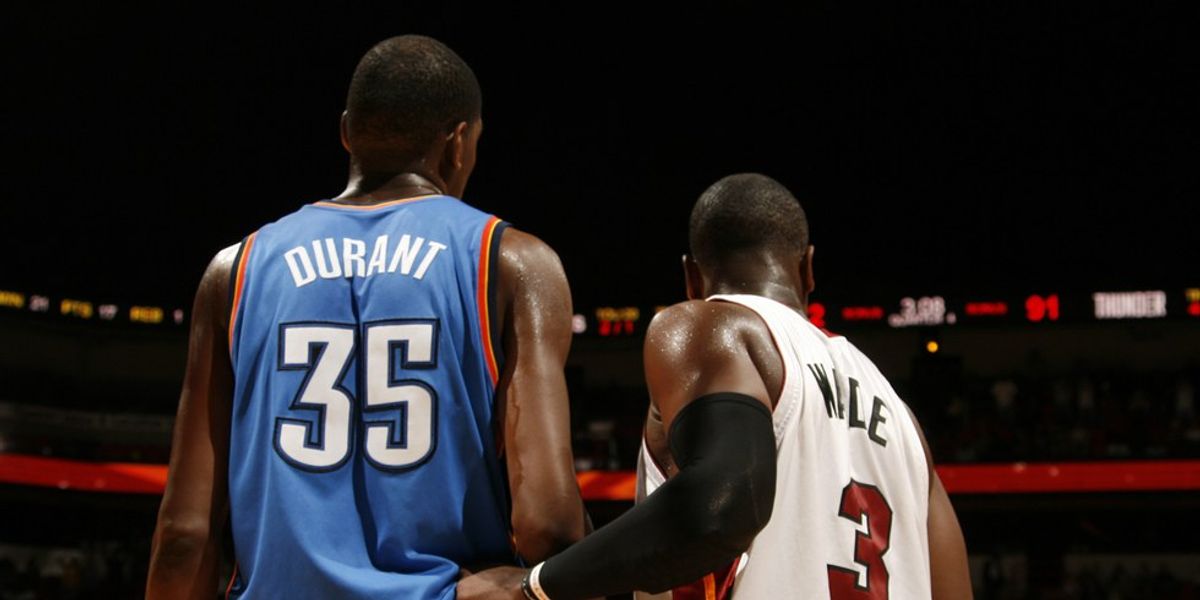 Hey, friends. First, I'm sorry for your loss. Kevin Durant and Dwyane Wade are two legendary players and it really sucks that they have moved on. But, all good things must come to an end and these two superstars have moved onto different chapters of their lives.

Sports fan are notorious crazy. Some border on insane. Tales of fans getting arrested, throwing things onto the field of play, stalking their favorite players, crying after losses, tenting overnight in the winter for tickets and insane pre-game traditions run wild. It is so easy to get swept up in the frenzy and shock of two marquee players, the faces of their respective franchises, leaving to pursue different opportunities.

It is fine, and, frankly, normal, to mourn the losses of Durant and Wade. Sports have a fascinating way of uniting a group of people, a city, a state or a country around a common thing. When a beloved piece of that "thing" is suddenly taken away, it is understandably heartbreaking. What is not understandable is burning jerseys, Tweeting threats, harassing the athletes at their home or any other harmful and hateful activities.

Remember in 2010 when LeBron announced that he was leaving the Cavs and fans burned his jersey in the street? Then, four years later, remember how foolish they looked when they suddenly welcomed him with open arms upon his return? Don't be vacuous and impulsive.

These men are only human. There are stories, motives, reasons and other extenuating factors (some more obvious than others) that we fans will never altogether understand that lead to their decision to move on. One man is returning home. The other is taking a job at a prestigious, growing and immensely successful organization. Now, ask yourselves this: how many people do you know who have worked at the same job their entire life? Very few. And, who in their right mind would turn down the opportunity to take a job at a more successful organization where the individual would make more money. Also, when given the opportunity to return to your hometown after a long time away, wouldn't most people leap at this opportunity?

Be angry, be upset, feel sorry for your team, the players and the coaching staff, but don't destroy these two men. They are two of the most successful, well-respected, talented, hard-working, recognizable faces in present sports, never mind the NBA itself. This lucrative league will always have stars move around. Super teams (whatever your opinion on those may be) might be formed. But think about how exciting it will be to watch KD, Steph, Klay, Iguodala and Draymond tear up the court. And imagine how emotional and truly happy DWade will be to be returning to his hometown. Wade and Durant have been cornerstones and parts of the foundation at OKC and Miami. Relish in the time that we fans were able to see them in the team's colors.

Pain is inevitable. Heartbreak over your favorite player leaving is reasonable. The realization that your team has some serious rebuilding over the next few year is daunting. But, hey, that's why we love sports.