Barbies And G.I Joes: The Irrelevance Of Gendered Kids' Toys In 2016
Odyssey
CurrentlySwoonLifestyleHealth & WellnessStudent LifeContent InspirationEntertainmentPolitics and ActivismSportsAdulting
About usAdvertiseTermsPrivacyDMCAContact us
® 2023 ODYSSEY
Welcome back
Sign in to comment to your favorite stories, participate in your community and interact with your friends
or
LOG IN WITH FACEBOOK
No account? Create one
Start writing a post
Entertainment

Barbies And G.I Joes: The Irrelevance Of Gendered Kids' Toys In 2016

Can't we just let kids do whatever they want? 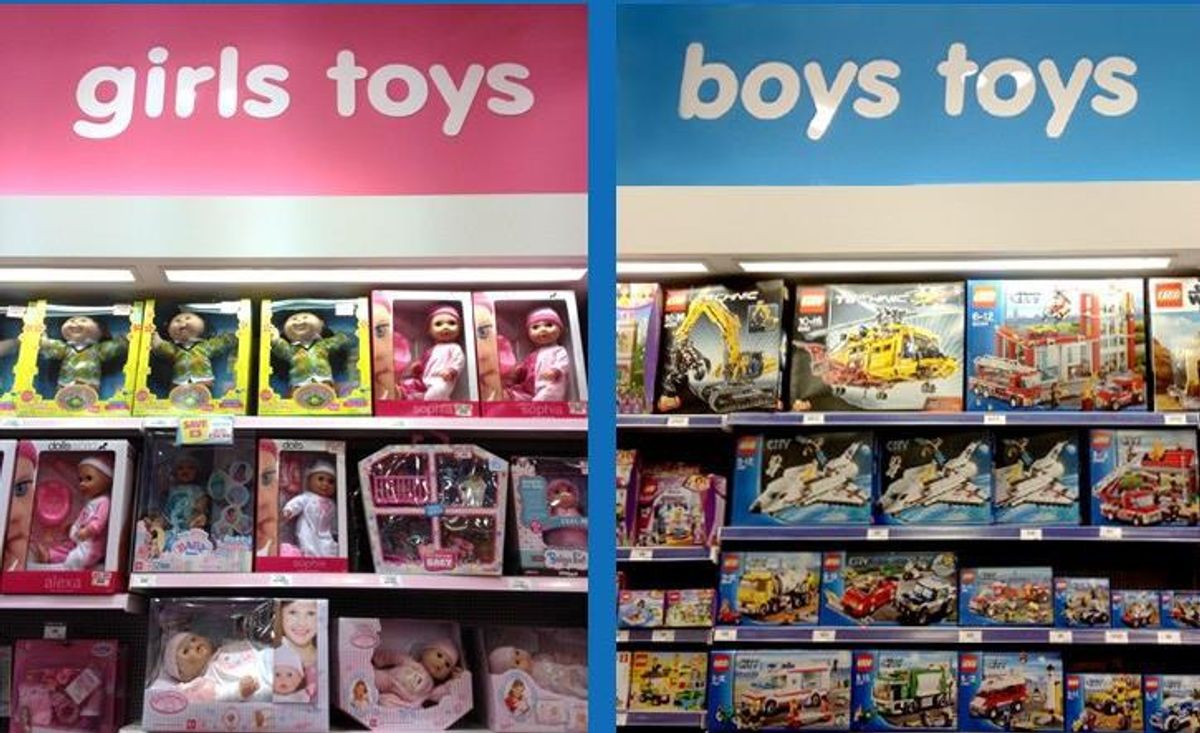 In 2016 there are so many different ways to express one’s gender, and it is becoming more and more acceptable in society for people to have gender expressions that don’t follow the traditional “male or female” gender roles. People praised Adele for dressing her son up as a Disney princess and praise Angelina Jolie for letting her child present their gender however they want to. So why do stores still separate “boy’s” toys from “girl’s” toys? Separating toys in this arbitrary way has a negative effect on children’s development and reinforces negative gender roles though life.

Not only is it arbitrary, but it is a money-making machine for the toy companies. Now, you have to buy two of everything if you have boys and girls. Elizabeth Sweet writes in her article for The Atlantic,“When it comes to buying gifts for children, everything is color-coded: Rigid boundaries segregate brawny blue action figures from pretty pink princesses, and most assume that this is how it has always been. But in fact, the princess role that’s ubiquitous in girls’ toys today was exceedingly rare prior to the 1990s—and the marketing of toys is more gendered now than even 50 years ago, when gender discrimination and sexism were the norm.” Did kids’ interests become more polarized? Probably not.

When you walk up and down the aisles in toy stores (even those that don’t put signs up) it is rare that there aren’t blue and pink sections with clear distinctions. The blue aisles hold GI Joe's, remote control airplanes, and Legos. The pink aisles carry Barbies, stuffed animals, and toy vacuums (as unbelievable as this is, I know a child who owns a toy vacuum). Lettoysbetoys.org writes, "Action construction and technology toys are predominantly marketed to boys while social role play and arts and crafts toys are predominantly marketed to girls. Both boys and girls miss out this way." Gendered toys are bad for everyone because playing is such an important part of children’s development and the development of their personalities. These toys teach kids what they think they are supposed to be, and what they think that they aren’t supposed to be.

“Boy” toys are strongly linked with aggression and fighting. Many of these toys promote an idea of toxic masculinity and aggression. Are these the only traits that we want young boys to think they can choose from? The fact that boys are told not to play with Barbies or “girly” toys tells them that they aren’t supposed to nurture, communicate, or foster interpersonal relationships. Girls are told that they shouldn’t play with many toys that promote interests in science and building. This shows girls from a young age that these things aren’t for them, which can shape their interests throughout their childhood. Physical attractiveness and household chores are what girl toys show girls that they are supposed to enjoy. Don’t you think that it is time to tell little girls that they are just as smart, and little boys that they are just as capable of feeling emotions? “For parents, it’s the same message as for teachers: Strongly gender-typed toys might encourage attributes that aren’t ones you actually want to foster. For girls, this would include a focus on attractiveness and appearance, perhaps leading to a message that this is the most important thing—to look pretty. For boys, the emphasis on violence and aggression (weapons, fighting, and aggression) might be less than desirable in the long run,” naeyc.org writes.

I understand that leaving comfortable, old-fashioned gender stereotypes in the past can be scary. When Target decided to ditch the gendered toy aisles, there was an outcry from people saying that this was a step in the wrong direction. A psychotherapist was even worried. “I don’t want to confuse kids that are young when we take them to a toy store, having them question what their gender is," says Tom Kersting. While some might agree with this sentiment, the important thing to remember is that what attributes society decides goes with gender is socially constructed. With children being able to decide when they are young what interests and personalities that they may possess, regardless of what adults tell them to like, the only thing that will happen is a more genuine representation of who kids really are. Pink is not an inherently feminine color, and neither is blue inherently masculine. We decided these things, and we can decide that our ancestors were making these rules in a time where they thought they applied, and now we know that they don’t.