The Impact of a Disney Movie
Odyssey

The Impact of a Disney Movie

Disney magic is real for all the believers. 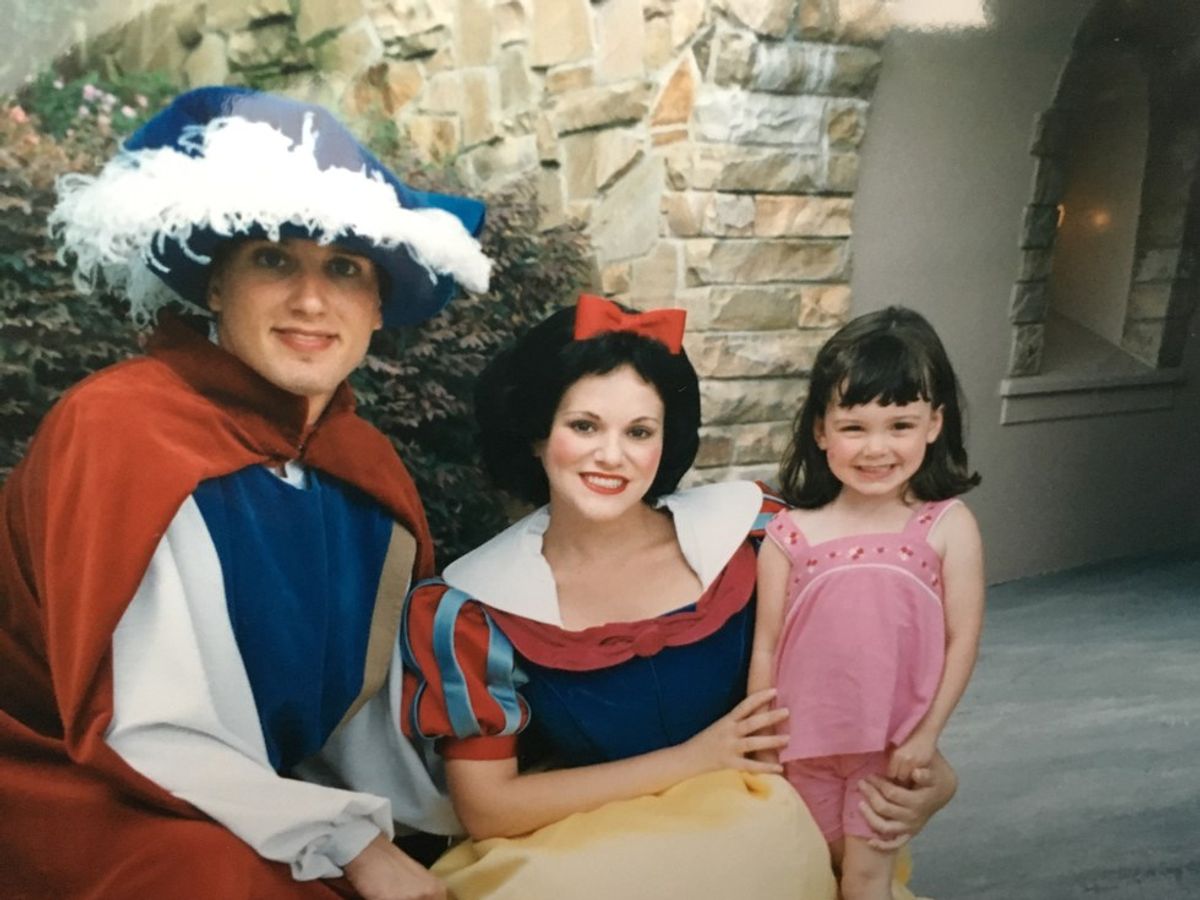 For most of us, our childhood consisted of watching Disney movies about fearless princesses, strong adventurers, and witty animals, I know mine did. I still remember loving Snow White and the Seven Dwarfs because I thought I looked just like her, and if you just look at the picture for this article, I think you'll agree. That's the biggest smile I think I've ever had and it's all because of Disney!

My family and I are Disney fanatics and have been to Disney multiple times. Each Disney film leaves viewers with a feeling of hope, adventure, and the thought that anything is possible if you just believe. Movies like Moana, Hercules, Peter Pan and Alice in Wonderland leave you believing in the 'impossible' and give you a feeling that there is something out there that is bigger than all of us. Movies like Cinderella, Beauty and the Beast, Sleeping Beauty and The Little Mermaid leave you with the hope that you will someday find your true love, no matter what the odds. Movies like The Jungle Book, Toy Story, The Lion King and The Fox and the Hound leave you believing in friendship, family, and adventure.

All Disney movies tell a different story that makes people feel the same love, loss, regret, hope, determination, and excitement that is being felt by the characters themselves. We learn so much from every film that the Walt Disney company has made.

We learn to except people for who they are no matter what our differences may be.

We learn that true love triumphs any evil that means to get in the way.

We learn that the love of family can break any spell.

We learn that helping others is more rewarding than doing what is good for ourselves.

We learn to be good people.

Growing up watching Disney movies has shaped me into the person I am today and I know that the messages in Disney films are meant to provide us with ways to overcome the evilness in the world and strive to be the best people we can be. Above all else, Disney movies are there to entertain us, make us laugh, and tell a great story.

With that said, the new, live- action Beauty and the Beast film should not be any different. This film is going to come to theaters on March 17, 2017 and there has been a lot of excitement about it since it was announced. Emma Watson is playin Belle, Dan Stevens is playing the Beast/ Prince Adams, Luke Evans is playing Gaston and Josh Gad is playing LeFou. In this version of Beauty and the Beast, they are honoring the original film while also expanding on it in subtle ways.

For example, there is a new character, played by Stanley Tucci, named Cadenza. He is the composer of the castle who was turned into a harp when the Beast was cursed.

Another slight difference in this film is the way Gaston and LeFou's relationship is dealt with. People who looked deeper into the original Beauty and the Beast film may have wondered why LeFou adored Gaston so much and this new film is going to explain it. Although LeFou's character isn't described as gay in the script, this is supposedly going to be a scene where you can tell that LeFou likes Gaston as more than a friend. This is going to be the first time that a Disney movie has an openly gay character in it and because of that, there has been some backlash from certain groups about whether or not that is appropriate for a Disney movie.

First of all, the point of this movie is to show that you may find love in unexpected places where you never thought you would before. Belle becomes a prisoner in the Beast's castle but grows to like him, despite his appearance. Shouldn't we all be doing that nowadays? This film came out in 1991. Twenty six years later and we are still uncomfortable with people who are different than us.

People should not be refusing to show this film (like what is happening in Alabama), they should be welcoming it. We should not be scared of people who are different than us. If there are children growing up in Alabama who are gay, they should be shown people in movies and television shows that are like them (although LeFou may not exactly be a role model). We should not have to add in characters that are gay (like it seems Frozen might be doing), we should have gay characters in a movie where their sexuality is not the main focus. We should be seeing characters that are in a same-sex relationship and also saving the world or fighting bad guys or discovering a new land. We should not be refusing to allow children to grow up in the real world.

Refusing to show this movie is only going to keep your life and your children's lives in a box because when children grow up they will realize that gay people should not be feared or looked down upon, they should be treated like everyone else.

Josh Gad, who has previously done the voice for Olaf in the Disney movie Frozen, is the one who plays LeFou in the new live- action movie and USA Today said that, "he's "really proud" to play LeFou, a character who has a "wonderful gay moment" in the film."

Although LeFou may not be the ideal role model for gay kids to look up to, he should at least be a person that they can connect with. For example, I am a woman and, although she's not exactly my role model, I can understand where Ursula is coming from in the film The Little Mermaid because her brother stole what was supposed to belong to her. There are always little ways that people can connect with even the most villainous characters in a story. So, if there was even the possibility that a child could relate to LeFou and know that it's okay to be gay, then that child should have the chance to see the movie. And the parents should be open to understanding their children because, like what we've learned from many Disney movies, a families love is stronger than anything.

Please go out and see Beauty and the Beast on March 17th and remember, "all it takes is faith and trust."