The Idea of America in the Face of Trauma
Odyssey

The Idea of America in the Face of Trauma

Will we continue to go low? Or will we go high, like we promised? 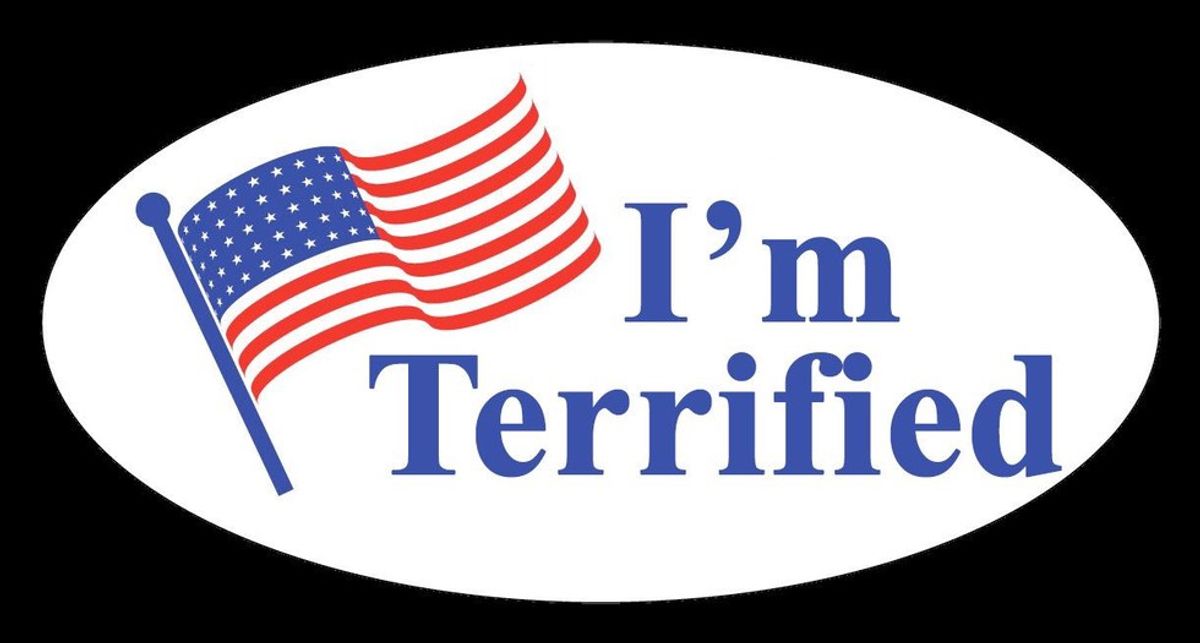 On November 9th, we felt an earthquake.

We at Purchase, a blue pinprick on an ultimately red plot, watched together as something we worked so hard to prevent came to fruition. I, myself, got no sleep that night, and as I wandered my campus in a haze, I heard too many screams of anguish from my peers. I saw my queer friends outside their dorms, crying into their phones, panicking about the prospect of living under someone who doesn't care about them for the next four years. I saw my black and latino friends, holding tight onto each other. I saw women of all backgrounds burying their heads into friends' shoulders, sobbing and afraid.

Back home, in Oneonta, I got a text from a friend, an Indian-American. "I just realized what will happen to me today," he said. People said my uncle was bin Laden when I was eleven... now I have to walk onto a college campus... It's pretty good here, but the city itself? I'm only doing things in the daylight, I think." A friend from home, who campaigned for Zephyr Teachout, called me shortly after, sobbing. "I'm so scared. What are we going to do now?"

There is, of course, no easy answer. Donald Trump, a man who openly and aggressively campaigned for racism, misogyny, xenophobia and sexual assault, is going to be elected the forty-fifth President of the United States of America on January 19th. His Vice President, Mike Pence, is a man who does not believe in the science of climate change or the basic human rights of women and LGBTQI people, and is an open advocate for both smoking and gay conversion therapy. This is who we've asked to represent us on the world's stage: President Pussygrabber.

While half the country is celebrating this win, the other half are terrified. The number of calls received by the National Suicide Prevention Hotline increased by 140 percent. At least two transgendered people have already committed suicide. . We are screaming from our blue pinprick into the night, and all we hear are echoes.

Walking around my campus that morning was the most surreal experience of my young life. I suddenly found myself promised to an unsure future, I saw my friends and their ways of life threatened by our own countrymen. Every step I took felt like I was walking further and further away from my real country. What had been my home for nearly twenty years was now uncharted territory. For the first time in my life, as a straight, white male, I feel helpless.

I will never fully understand how other people who aren't as privileged as I am are feeling right now. I got some sense of it, however, when I organized an open discussion with my peers the next day. A large crowd of us met in front of the giant clock that stands in the middle of the mall, and we cried and screamed and shook in the rain. We allowed ourselves these feelings of fear, of anger, of betrayal. We told stories of struggle, we shared our fear of going back home to face our loved ones who voted for their new president. But we never lost our humanity. Not everyone always agreed, but the whole event was civil, patient, and respectful. In an age of violence and intimidation such as this, we took part in true political discourse.

Not that true political discourse matters anymore, anyway. Hillary Clinton had nearly 200,000 more votes than Donald Trump, and yet the electoral college granted Trump the presidency, anyway. There are major problems with our system, and we continue to leave them in disrepair. That says two things about us; the people of this country have great faith in our government, but the government has no faith in its people.

And so, the original idea of America - a country welcome to the customs and traditions of any, where all freedoms are held in the highest regard, where that long fabled Dream is still reachable - has deflated. The slate has been erased, the plaque at the bottom of the Statue of Liberty eroded in an acid rain. Now we, and I say this collectively, are left with a conundrum: In the face of such a trauma, in which half of the country is affected in a dangerous way, what is the New American Idea?

Or are we going to let out the poison? Will we scream and cry and rage into the night, and then set off towards the higher path in the morning? Will we turn the weapon of democracy against those who have taken advantage of it? Will those like me use their privilege to remind our representatives that they represent everyone?

"When they go low, we go high" is what we must print on our banners. It is, in fact, the most significant slogan we could possibly use in this regard. America was swallowed whole by the earthquake last night, when all we heard were screams. And now, our voices ringing with the hope that was promised, we must soar.