The Giants Go As Far As Odell Beckham Takes Them

The Giants Go As Far As Odell Beckham Takes Them

He's one of the five best players in football. If the Giants plan to win their third Super Bowl in ten years it will be because of their star receiver. 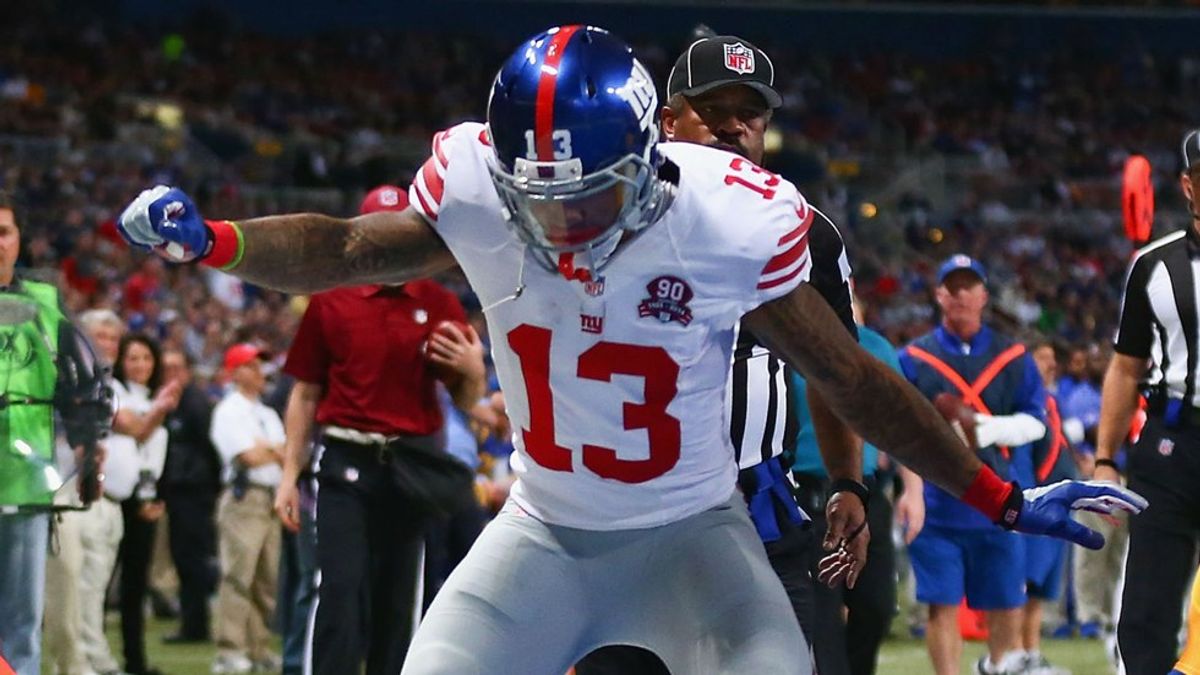 The New York Giants are back in the playoffs so you know what that means right? A week full of stories comparing this year’s Giants team versus the last two that went on to win the Super Bowl (funny that Giants writers and fans overlook the Divisional Playoff loss to the Eagles in 2008). I’m sure you have heard enough “playoff Eli is different man!” and my personal favorite “when our defense gets hot no one can stop us”. These are all valid points to a degree, but if the Giants are able to make it to their third Super Bowl with Eli Manning it will not be for any of the reasons mentioned. It will be because of Odell Beckham Jr.

It’s pretty hard to ignore Odell. He’s either making plays and dancing on defenders or simply just dancing. Talking heads love to focus on his “antics” which some geezers might mistake as having fun, but never seem to recognize how good he is. Through three seasons Odell has totaled 288 receptions, 4,122 yards, and 35 touchdowns. I don’t think I have to say it but these are record setting numbers. In case you cannot grasp the greatness in that stat line here is a comparison for you.

Through first 40 games of their career per Pro-Football-Reference:

That Hall of Fame receiver is Jerry Rice. Football purists will be quick to point out the difference in playing styles when Rice played versus today’s game which is valid. My counter is that Rice had Joe Montana and Steve Young throwing to him, both considerably better than Eli.

I say all that to say this–Eli Manning has never had this type of weapon at his disposal for the playoffs. During the 2007 Cinderella run Eli had Plaxico Burress who was damn good that year. The two connected on the game-winning touchdown of Super Bowl XLII, ending the New England Patriots’ perfect season. In the rematch with the Pats Eli’s best weapon was Victor Cruz who is now the third option. The defense is as strong as it was during the two previous Super Bowl runs so the onus will fall on the offense as to whether or not the Giants play in what could be a trilogy against the Patriots.

Traditionally teams that perform best in the playoffs are the ones that play good defense and run the football effectively. The Giants’ running game is middle of the road for lack of a better term. Rookie running back Paul Perkins deserves to be the starter over the underwhelming Rashad Jennings, but that does not change the fact that this offensive line can’t run block well. Since that is the case Ben McAdoo would be wise to substitute short passes as de facto run plays.

One of the more frustrating things about watching the Giants is the way Odell is used. Over and over again Odell has show that he can turn a five yard slant into a monster touchdown like this.

When Odell scored more than one touchdown this season the Giants were 2-0. Seeing this you would think McAdoo would have a special section on that Cheesecake Factory menu-sized (name courtesy of Michael Lombardi) playbook dedicated to getting Odell in space. Slants, rocket screens, end arounds, jet sweeps and especially punt returns should be utilized. Very few players in the league come close to Odell in the speed department and no defender in the playoffs is among that group speed demons.

The first opponent for the Giants is a familiar foe, the Green Bay Packers. These two teams are no strangers to each other–Eli Manning is 2-0 at Lambeau Field in the playoffs–so there will be few surprises. When the two met earlier this season the Packers were able to get the win. This time around the Packers secondary is banged up significantly and the defense as a whole has become reliant on turnovers. The Giants can use this to their advantage and utilize Odell as the featured weapon and decoy to open up the field for Sterling Shepard and Victor Cruz. Assuming they are able to get past Aaron Rodgers and company the Giants game plan should remain the same for the playoff run–get Odell the ball.