The ABCs Of The University Of Rhode Island
Odyssey

The ABCs Of The University Of Rhode Island

Everything a prospective student needs to know and everything a current student does know. 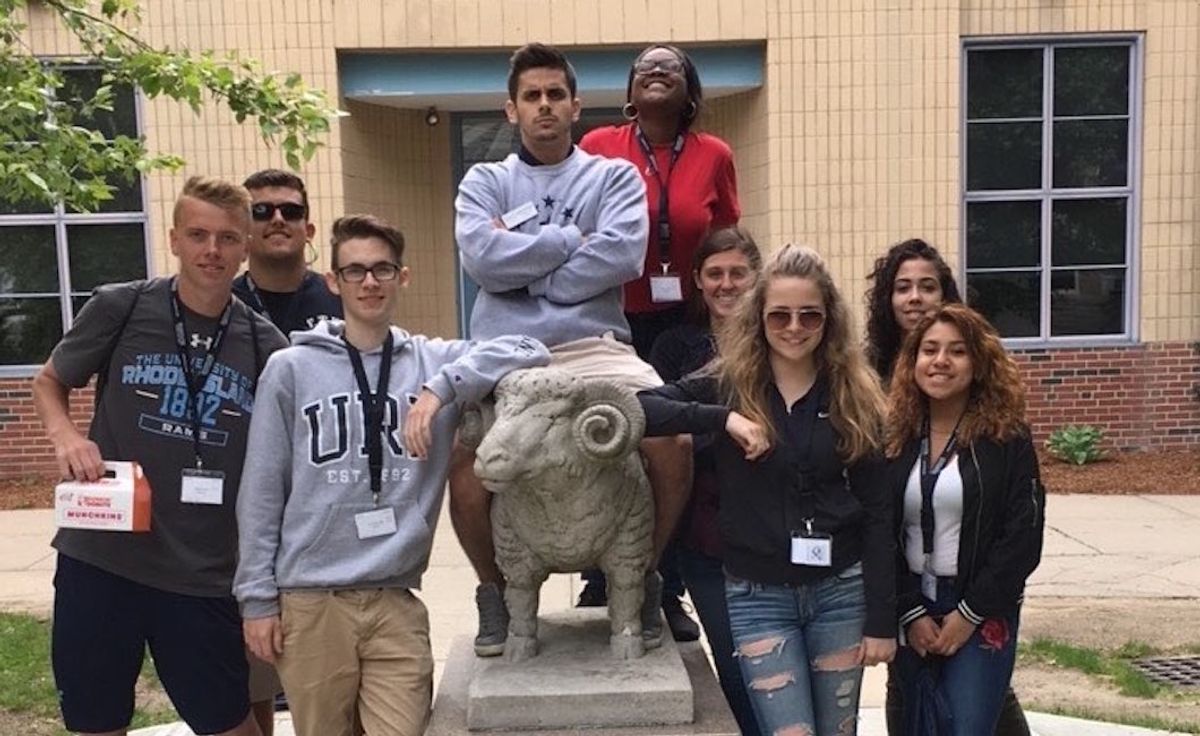 Whether you do it yourself or not, you know at least a handful of students who pop Addys. Especially when exam week rolls around.

The social gathering spot of every freshman's first year at URI. It's where all the freshmen sit the first weekend of the school year in hopeless search of parties, as well as creepy upperclassmen coming to pick up girls. Catch the lonely and the desperate waiting out here in the late hours of the night.

One of the most popular bars known to URI's upperclassmen, you'll more than often see many Snapchats of people getting obliterated at Chuck's. If you're under 21 you'll be counting down the days until it's your turn to cause a scene there.

Ah, the infamous dining halls at URI. Choosing between Butterfield and Hope is a struggle between friend groups, as "Butt" has a burrito bar, but Hope has burgers. Even though the food is far from gourmet, many freshmen don't have their cars on campus so they'll suffice. Have fun trying to find a seat in either dining hall though!

One of URI's gems amongst its campus. Located at the top of campus, the Emporium holds everything a college student needs. Multiple restaurants, convenience stores such as Cumberland Farms and CVS, as well as a nail salon, a tanning salon, a hookah lounge...not necessarily what a student needs, but. It's worth the hike across campus.

A term that holds true for the majority of the freshmen at URI. At first you'll think you can avoid it due to the excessive walking through campus, though the Dunkin' Donuts every day starts to add up...as well as the many cups of jungle juice you'll probably drink at that party this weekend. No one is superior enough to escape the wrath of the Freshman 15.

URI is known for its constant battles of Greek Life versus GDIs. With 20% of the campus involved in Greek Life, you'll more than likely see students walking around wearing letters or be sitting in class and overhear a conversation that has to do with whatever frat or sorority. While members of Greek Life proudly represent their organizations, GDIs just don't understand the fascination.

URI's newest and most luxurious dorm. Home to mainly nursing, communication and pharmacy majors, if you're lucky enough (like me) to live there without being one of these majors, you've done something right.

It's great knowing that some students pay close to $40,000 per year for Internet access that works half of the time. You'll stay up all night working on a project, however by the time you get to class the Internet is down and no one can present. Professors will tell you that you should've saved your work on a flash drive, despite the fact that it's 2017.

The college town which holds the University of Rhode Island. Technically it's a part of South Kingstown, though it's spelled differently and apparently is its own separate entity. Pretty much just miles of farmland and old, antique buildings that date back to the 1700s. Not your typical college town.

Like New Jersey, the other half of the students you meet will probably be from Long Island. You'll learn that they are a different breed than upstate New Yorkers, and they won't let you forget it. You'll sit in the dining hall and listen to them complain about how much better bagels and pizza are in Long Island, as well as how everything about Long Island is just better. I have a special place in my heart for my Long Island people.

The most popular drug of choice at URI. More than likely you'll be walking on campus and you'll smell the faint scent of the good kush...though you don't know where it's coming from. You don't even have to smoke to know who the plugs are on campus.

Otherwise known as "Gansett," it's the town where it all goes down. Located ten minutes from Kingston, it's where all the off-campus students live and thrive. Beautiful beaches, various bars and quaint neighbors make it easy to turn into your own personal playground. It's the town where you've had the best nights of your college career....and the ones you can't remember. You're bound to drive by a house and think to yourself, "Did I go to a party there once? I definitely did. Or maybe it was at the house next door."

One of the most popular events held by the Student Alumni Association, Oozeball is a mud volleyball tournament that's a great way to end the school year. Who knew playing in mud and taping your shoes to your body could be so appealing?

It's no secret that URI is known for being a party school. Ranked high on many lists, many prospective students choose URI just to see what all the hype is about. While the administration is cracking down on the party scene, students find their ways around it. Kickback in the dorms? House party in Gansett? Rager in a fraternity house? It's all been done. And it probably won't stop anytime soon.

Perhaps URI's most beautiful asset, it's usually the spot that wins over prospective students. On a warm, sunny day expect to see students laying out on blankets, dogs running around catching frisbees, and footballs being thrown around from every which way. Come after 4 pm and you'll catch a glimpse of people walking on tightropes, swaying in hammocks, and doing other activities that aren't quite legal.

If there's one thing URI has, it's school pride. At orientation you'll learn the chant, "RHODY, RHODY, RHODY!" to which you respond, "RAMS, RAMS, RAMS!" Even on a regular basis you'll hear students shouting this throughout campus. At URI we love our fellow Rams, so it's only respectful to shout it back.

The shitty dorms that second-year students have to live in, unless they're lucky and get to live in Eddy Hall. It's a community within itself, with suite-style dorms and balconies that overlook students walking to Hope Dining Hall. The only good thing about them is their location, right across from the dining hall and the library. No one wants to live in the Slums, though those who survive their experience say it's not as bad as they thought it'd be.

The dating app that ruins lives. What starts out as a joking download, results in boys blowing up your phone to meet at your dorm at 2 in the morning (though you pretend you're sleeping because they can't swipe into your building after 11 o'clock). As you're swiping through Tinder you're bound to match with someone who one of your friends might've hooked up with.

The most popular mode of transportation on the weekends. No one wants to succumb and be the designated driver, so they'd much rather pay $60 to go from campus to Gansett, despite it only being a 20-minute drive.

If you and your friends all go to different schools, you know the struggle of trying to get them to URI to visit. Once they visit? They'll be begging to come back. From drunkenly eating McDonald's in your dorm room after a night out to exploring the beaches down the road, URI has so much to offer everyone. It really is a school that you can make your own if you go about it the right way.

Before college, you thought you walked a lot. Come to URI and you'll realize just how out of shape you are. With the many steep hills, long paved paths and windy walkways, you'll regret complaining about your walk from one room to another in high school. Nowadays, you're sprinting across campus to get from White Hall to Swan in a matter of ten minutes.

Like Adderall and marijuana, you probably know a handful of students who do Xans. Some students sell it like it's candy, though it's probably smart if you stay clear of these people.

Technically the stickers are orange, however, there aren't many words that begin with Y. These stickers are the kiss of death to party houses, as they represent being a nuisance to the public and therefore they can't throw down anymore. They're like an STD, everyone avoids them the best they can but they do happen.

Like previously mentioned, there aren't many words that begin with Z. URI is a zoo within itself but in the best way possible. Students are so spirited that Keaney blue practically bleeds out of them. We are loud, we are passionate. We make a scene wherever we go because we are that school. Anyone who was on campus after the 2017 Super Bowl...you can attest to the fact that if want to riot, we will riot