The Tale Of A College Acceptance Nightmare
Odyssey

The Tale Of A College Acceptance Nightmare 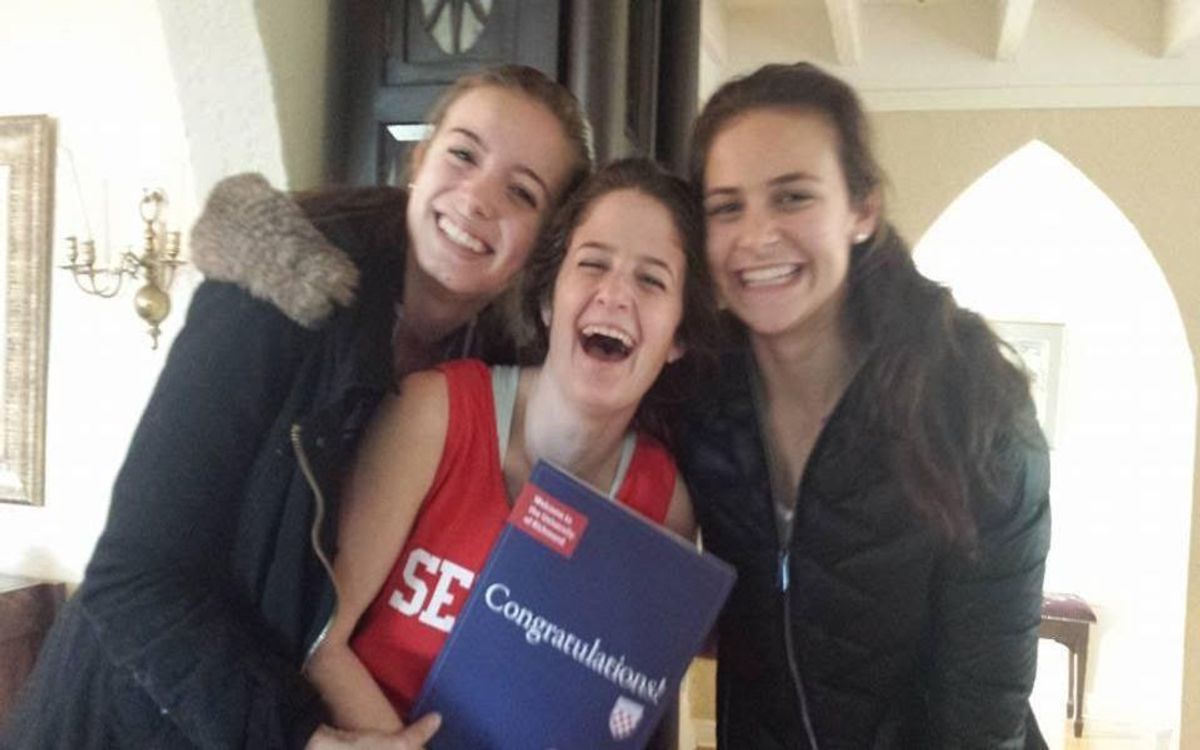 Over Thanksgiving break, I had the pleasure of catching up with high school friends and family, seeing teachers from high school, and even some acquaintances while shopping in my small town. One of the days I ran into a girl whose sister I had played tennis with and was friends with. My friend's sister is now a senior in high school and talking to her brought back some of the memories and stress I had two years ago at this time. Whether or not you applied early decision to a college, the days between November 15 and December 13 of 2014 were easily some of the most stressful of my entire life, so here are my takeaways from that time.

The school I applied to early decision and eventually ended up attending sent out their acceptance and rejection letters by mail, something that is very unique in this era and something that proved to be quite frustrating. On a Tuesday, the University of Richmond tweeted out that the letters had been sent out and to start stalking the mailman, which is exactly what I did. Everyday my friend and I would sprint home and stalk down the mailman and dig through the mail playing my letter would be there. Day after day, it was not.

On Thursday, we heard that people from surrounding towns had received their letters, but no luck for me. Then came Friday. Ah, Friday December 12, 2014. Potentially the worst day of my life. Sorry I'm dramatic.

Anyway, I walked into my last period for the day and sat down to take my enviro test. One of the girls next to me turned to the girl behind me and told her to check her phone. I jokingly teased and asked if they were talking about me. They both looked at me like dears caught in the headlights and just quietly told me to look at Facebook. I did and found that not only a boy from high school had gotten into Richmond, but one my of my best friends did as well. My stomach immediately flipped and I ran to the bathroom, frantically calling my mom praying my letter was there. Alas, she of course was not home. I began crying out of fear and anxiety. I as of course beyond excited for my friend but could not focus on that, only on myself. I had been raised in such a competitive town that not getting in would be an embarrassment. I needed to succeed.

I went back to class, failed my test, and twiddled my thumbs, unable to focus until the end of class. I then ran with my friend to her car, stalked the mailman, prayed a little, but still no letter. I then went back to school for a dance rehearsal, defeated and discouraged, knowing there was a slim chance I was getting into my first choice of school.

That night, my friend who got into Richmond threw a small get together for our friends as many of us were getting into our first choice schools. I decided to go and say congratulations and then I would leave. That isn't exactly what happened. I walked into her house and immediately started hysterically crying. I wanted so badly to be happy for her, but I just couldn't be. So what did I do? In my pajama pants and sweatshirt, I got drunk with my friends and went to a party and tried to forget about everything, pretty positive I had more applications to fill out.

I woke up the next day to a text from another boy from my high school saying his mom went to the post office and got his letter and he got in. I replied congrats, he said back to good luck!

That night, I was supposed to host Secret Santa for my friend group. How was I supposed to be in a merry mode when everyone was getting into college and I wasn't?

I went upstairs to get dressed and passed my front door and saw a pile of mail in front of it. I hesitantly approached and saw a letter from Richmond and yelled to my parents. I brought the letter into another room and just started crying, telling my self there were other schools. I opened the letter and saw Congratulations, welcome to Richmond 2019. I was stunned. I stared at it for a solid 5 minutes before it set in. I screamed for my parents and they immediately ran over when I said I got in. My 4'10'' picked me up and we celebrated and called everyone. My friends came over to celebrate and we all lived happily ever after, right?

Well, not exactly. Like I said, my groups of friends was overall very fortunate and many of us attended our first choice schools. But here's the thing, we would have been happy anywhere. In the moment, I could not have imagined that. I remember not being able to sleep or eat, yearning to know what the admissions office thought of my application. I knew they had seen it, why couldn't they just tell me if I was in or not? So much of my anxiety came from the atmosphere around me. Facebook statuses of kids in my grade getting into Ivy's haunted me and I convinced myself I would judged and scrutinized if I didn't post a Facebook status by Christmas. Wow, I hate myself for even typing that.

I am such a hypocrite for saying this because there was no one more freaked out and anxious than I was, but high school seniors it going to be okay. And you all know that too, and it's easier to say that from the other side, but I promise you it will be. Sometimes the school I thought was my dream school hasn't been so dreamy. Sometimes I've wanted to quit. Sometimes I questioned coming here, or going to college at the end of the day.

But at the end of the day, here's my advice. Enjoy your time with your high school friends because soon you'll go months without seeing them. Take in every moment of senior year, because it will be gone for you know. Just try to relax and enjoy every single second. You'll be okay. No admissions office's opinion is worth driving yourself crazy. You're intelligent and you're valued and don't let anyone tell you you're not. Just remember how amazing and special you are because you are and nothing can change that.