The Sun Is Also A Star By Nicola Yoon, Review
Odyssey
CurrentlySwoonLifestyleHealth & WellnessStudent LifeContent InspirationEntertainmentPolitics and ActivismSportsAdulting
About usAdvertiseTermsPrivacyDMCAContact us
® 2023 ODYSSEY
Welcome back
Sign in to comment to your favorite stories, participate in your community and interact with your friends
or
LOG IN WITH FACEBOOK
No account? Create one
Start writing a post
Entertainment

The Sun Is Also A Star By Nicola Yoon, Review

This is a description and analysis of the book The Sun is Also a Star. 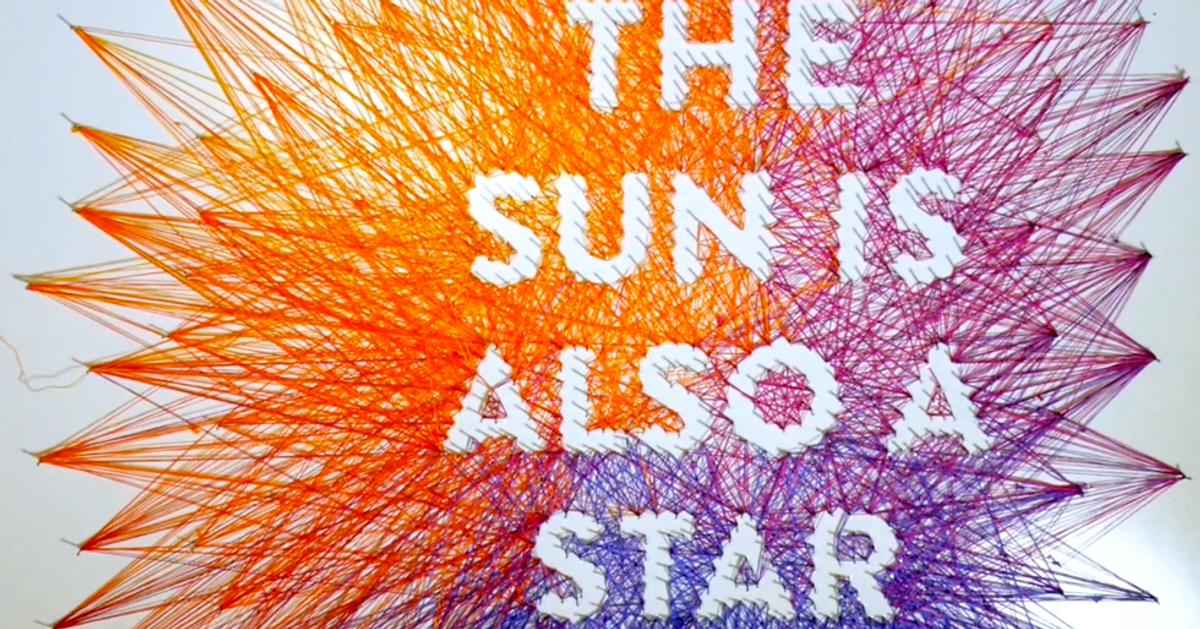 I have never cried during a book. Ever. Until today.

I don't remember the last time I finished a book I read that wasn't a school requirement. Until today.

The Sun is Also a Star by Nicola Yoon broke both of those streaks. It had been catching my eye in my school store for days before I finally decided I just had to have it. The day I got it, I walked out of the store feeling a little lighter despite the fact that I actually had more physical material to carry with me.

I got home that evening, sat down on the couch, opened my new book, and began one of the most involved journeys I have ever been on without leaving my seat. I finished in just over a day. Which is not me. It was just too good.

Daniel is a first generation American Korean with a jerkface brother and a mother and father who push him to be a doctor despite the fact that his passion lies in poetry. Natasha is a teenage Jamaican girl with a spunky afro who moved to America when she was not yet ten years old. Her family is being deported tonight.

Daniel spies Natasha early in the morning and follows her. He saves her from a car that nearly runs her over, and they start talking. Natasha does not believe in love, passion, or fate. She believes in science. Daniel decides to use science in an attempt to get her to fall in love with him. Annoyed and knowing it will never work, Natasha agrees.

The story takes place over the course of the day. This was clever on the author's part, allowing for a deeper connection between character and reader than most books allow. It was unique and intriguing to me that all the events in the book were able to happen in just one day.

In addition to the genius of a day-long story, the book is set up in such a way that the two main characters Daniel and Natasha take turns telling small parts of the story in a first-person narrative. When any secondary character is introduced, the author takes a break with the first-person narrative in order to give a third-person, short history on that person and how their interactions with the main characters impacted them. This added power and meaning to the events of the day. This setup brought me into a whole new awakening. We all impact people every day. Every little word we say means something and can play a much bigger part in others' lives than we might realize. Another thing I love about this setup is that we understand how and why each of the secondary characters acts the way they do. I realized that every individual person has an individual past and history and that it does no good to judge people harshly when we don't even know them or what they have been through. I found my heart softening and sympathizing with even the meanest and rudest characters in the book, just because I actually understood where they were coming from.

The Sun is Also a Star is deep, intriguing, and powerful. It is exciting, fun, and new. It made me laugh, and it made me cry more than once. It is a simple read. The emotions are intense and binding. Although Daniel says a certain four-letter word much more than I would normally care for, it did not bother me as much because knowing where he's coming from, I absolutely get it. The author wanted us to understand his frustrations to the fullest extent. The reality is that the book was so beautiful and powerful that despite the abundance of cussing, I completely loved it. I would definitely recommend it, and I will surely be reading it again. Soon.

Nicole Marie Nigro
Individual Creator
5093
c1.staticflickr.com
Where to start...... Let me start with the cliche that life throws us curveballs and what we do with it is what counts.