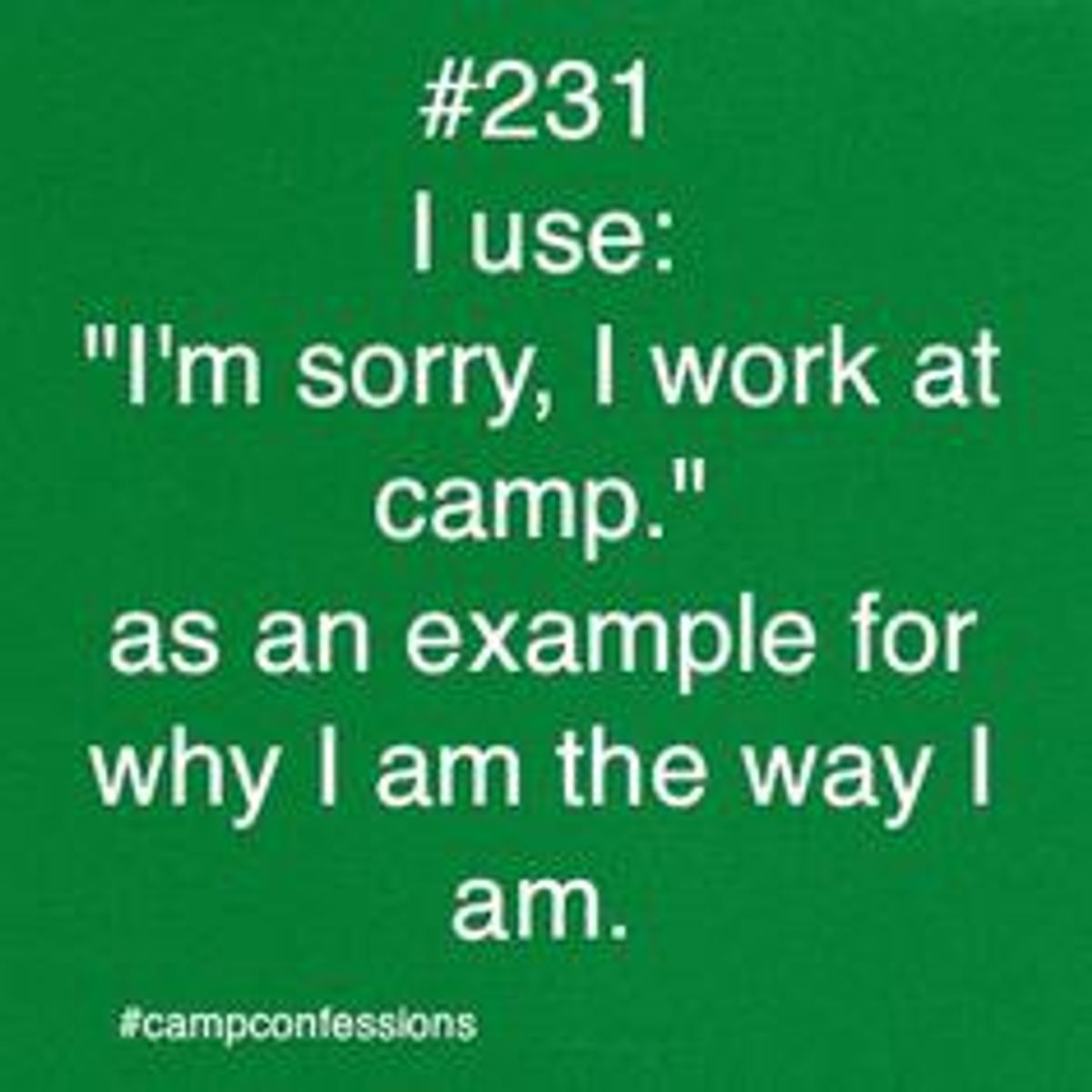 Summer's right around the corner! Which means, at least for me and several of my friends, it's almost time to go back to camp! If you're cringing as you read this, then you don't understand. For most summer camp staff, the perks include s'mores every week, the beautiful outdoors, access to a lakefront, and the opportunities to change the lives of children. Of course, every camp has it's culture, with it's staff and campers returning home with habits and mottoes they learned at camp. Some of these phrases are inside jokes or references that will only make sense to fellow camp members. However, there are a few phrases and mottoes I learned at camp that I have found to be relevant in my life outside of the cultures of cabins, bug spray, cliff kids, and blobbing.

Because I was a camper (and staff member) at a Christian camp, there are signs with Bible verses or messages on nearly every tree. One of these is a simple wooden sign with the picture of a cow next to a pile of bricks. My first year at camp, this sign confused me. When I asked my counseor what it meant, she told me it referred to the verse from Ephesians 4:29 that says: "Let no unwholesome talk come out of your mouths, but only what is helpful for building up the one in need and bringing grace to those who listen". "Milk and bricks" is a phrase to remind people to say things that are wholesome (like milk) and that build each other up (like bricks).

After learning this, I noticed at camp that whenever campers said something mean or excluded others, a counselor would say "Milk and Bricks!" to remind them of what they should be saying or doing instead. Is it dorky? Kind of. But as a college student surrounded by relationships, gossip, drama, and competition, I think having the phrase "Milk and Bricks" is a handy reminder to have in your back pocket.

Listen, when you work at a camp where girls have to wear one-piece swimsuits and wide-strap tank tops, this phrase is thrown around a lot to make them understand why they can't wear everything they packed.

This phrase isn't meant to slut-shame or praise a single way of dressing. However, there are days, where you will not have much time to put together a cute outfit, do your makeup, or have clean, styled hair. But does that mean you shouldn't still feel beautiful? If you're feeling frumpy, the phrase "modest is hottest" doesn't have to mean that everyone who isn't dressed like you is lower, but you feel that you have the right to be just as hot and confident as they are.

At camp, water has a healing properties. At least, that's what the staff makes it seem for the campers. Have a headache? Drink some water. Stomach hurt? Just drink water. Can't use the bathroom? Where's your water bottle, you need to drink water. Homesick? Water cures homesickness, now CHUG. You're dizzy, hot, and have chapped lips? Kid, you're dehydrated. Drink water and go to the nurse.

In the real world, I don't think that this is such a huge deal, but it doesn't hurt. How many times do we go for the sugary soft drinks, sweet tea, or specialty coffee when we have a meal? How many of actually get the recommended 8 glasses of water a day? Why not remind ourselves to "just drink water" and do our bodies a healthy service?

This is taking the phrase literally, which healthy and necessary to survive. But what about metaphorically? Well, think about those health experts and articles that recommend drinking a full glass of water before every meal.

"It's fine? That's not a camp phrase! Everyone says that!"

Well, last summer it was pretty much the theme for camp because it was said so much. In my book, "It's fine" is a camp saying. There were two ways to interpret "It's fine".

In one scenario, it was the worst answer in the world.

Supervisor: Hey, you were on gym duty and none of the equipment was returned.

Counselor: It's fine. I'll make sure to remember tomorrow.

Supervisor: *Breaks clipboard because it's NOT fine*

In another scenario, it was a phrase of optimism and strength.

Supervisor: Hey, you're going to have to teach Nature Study even though you wanted to teach arts and crafts.

This use of "it's fine" is the phrase that is helpful outside of camp. Sometimes things get overwhelming with homework, deadlines, events, and obligations. But you just got to tell yourself "It's fine" and then carry on. Stay positive and believe that in the end, it will all work out fine.

I'm cheating with this last one because it's a song, not a saying. Anyone oppose?

Every camp is different so they might not all use this military song. But at the camp I go to, every evening program ends with a solemn singing if taps. If you don't know it, the lyrics are:

Day is done, gone the sun,

All is well, safely rest

In the Paradise of Youth that is summer camp, this song can get very old after weeks of singing it every night, and you can take it's message for granted. However, much like, "it's fine", these lyrics are relevant outside of camp life because when reality overwhelms us, we need to remind ourselves that when this day comes to a close, it means that a new day is just around the corner. These lyrics are also comforting because they reassure us (no matter who you are or what you believe in) that when the sun goes down after a long, hard day and we finally close our eyes to get a break, there's someone out there who loves us and wants us to succeed.

Caitlin Marie Grimes
University of South Florida
10880
Beyond The States