Stacey Abrams Is Changing The Georgia I Know

Proof that far-left political platforms have potential in even the most historically Republican-dominated political areas. 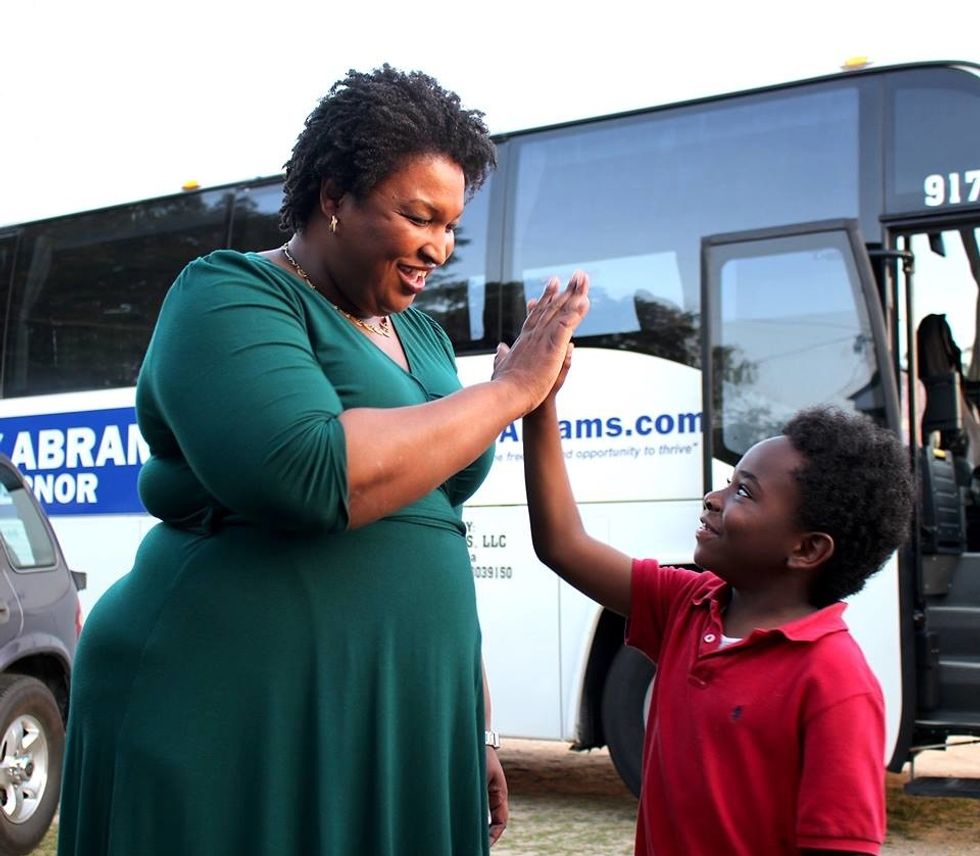 I grew up in a red state where Confederate flags flew high, racist propaganda was displayed on pickup trucks, and Trump rallied just outside the perimeter of my city. However, my upbringing was one characterized by teaching acceptance, environmental protection, and awareness of the systems of oppression which affect me, as a woman, but create the white privilege from which I benefit. I grew up in Atlanta, GA which is why the recent Georgia elections have been so close to my heart.

Especially the gubernatorial election, where Stacey Abrams and Brian Kemp are the two relevant candidates running for election. With essentially opposite platforms, Stacey Abrams advocates for implementing gun safety legislation, replacing jail time for marijuana charges with fines, and expanding Georgia's Medicaid program by lowering premiums. Not only is she far more liberal than many other popular Georgia candidates, if elected, she would be the first Black female governor in the United States of America.

On the other side of the spectrum, Kemp's political campaign has followed Trump's evocative model, relying on a "good-ole-boy" or non-establishment image. Kemp promises to take a chainsaw to burdensome regulations, and deport "criminal aliens" whom Kemp believe are contributing to Georgia's issues of sex trafficking, and opioid use, despite contradicting evidence. Additionally, Kemp is appealing to constituents in rural Georgia who often feel like they are denied the same opportunities as those in metropolitan areas, due to their lack of high-speed Internet. Kemp makes promises to relieve these ailments, by incentivizing the private sector to spend in those regions, often by eliminating sales taxes instead of creating new governmental policies.

As it stands now, 50.4% of the votes belong to Kemp, compared to Abrams' 48.7%. However, Abrams has not yet conceded and maintains hope of a run-off due to reports of thousands of uncounted absentee and provisional ballots. Personally, I had issues with my absentee ballot and have called the Voter Suppression Hotline to ensure that it was counted, where I left a message but have not yet heard back.

Regardless of the outcome of the election, one thing is clear: Stacey Abrams lit a political fire under the citizens of Georgia and annihilated skepticism that a Black woman running with a far-left platform couldn't stand a chance in such a historically red state. The election gained national attention from members of both political parties with visits to Georgia by Barak Obama, Oprah Winfrey, and President Donald Trump. Kemp himself admitted that he was scared, saying the election "continues to concern us, especially if everybody uses and exercises their right to vote." This quotation was surprising to some, because Kemp's office is the one in charge of overseeing Georgia's elections, so citizens exercising their constitutional rights shouldn't be a concern. However, I was disappointed but not shocked by his statement, considering Georgia's history of Jim Crow laws that institutionalized white supremacism, and Kemp's history of placing 53K registrations (nearly seventy-percent of which were for black voters) on hold under discriminatory exact-match laws.

To me, Kemp's extreme efforts to suppress minority voters, while disgusting and undemocratic, shows his fear of their power. A power that is undeniable, with a projected record-breaking turn out from key groups like black voters, and citizens between the ages of 18-24. I heard stories of voters in the Metro-Atlanta area waiting for upwards of four hours in harsh weather conditions, sometimes with only three operating voting machines in their precinct, just to make their voices heard.

And heard they were. It is undeniable that Stacey Abrams and The Georgia Democratic Party have successfully begun a long overdue push to mobilize away from favoring a dialogue of fear-mongering, and towards equity, acceptance, and representation in the American political system. Stacey Abrams adamant fight against corruption and voter suppression empower every-day citizens to become key-influencers in politics. Never in my eighteen years have I seen more people passionately engaged in a state-wide election. I remember talking with my friend from High School who just last year pushed against my suggestion to register to vote, because he claimed his votes didn't matter in a system that ignored him; he now has pictures with Stacey Abrams all over his Instagram and has been outspoken on social media about the importance of voting. Seeing him, and so many others smiling with their Georgia Peach "I Voted" stickers, warms my heart.

Stacey Abrams represents everything that I love about Georgia: our love for our community, our diversity, and our power. Because of Stacey Abrams, I have hope for not only Georgia's political scene but the American political system as a whole. The fight is far from over, but as long as Stacey Abrams is on my side, I look forward to the future.

12 Websites That Are THE BEST For Christmas Shopping This Year