Every state has its own folklore and ghost stories. The Garden State is definitely not lacking in them. Here are some reportedly paranormal locations in NJ. "Be afraid, be very afraid." 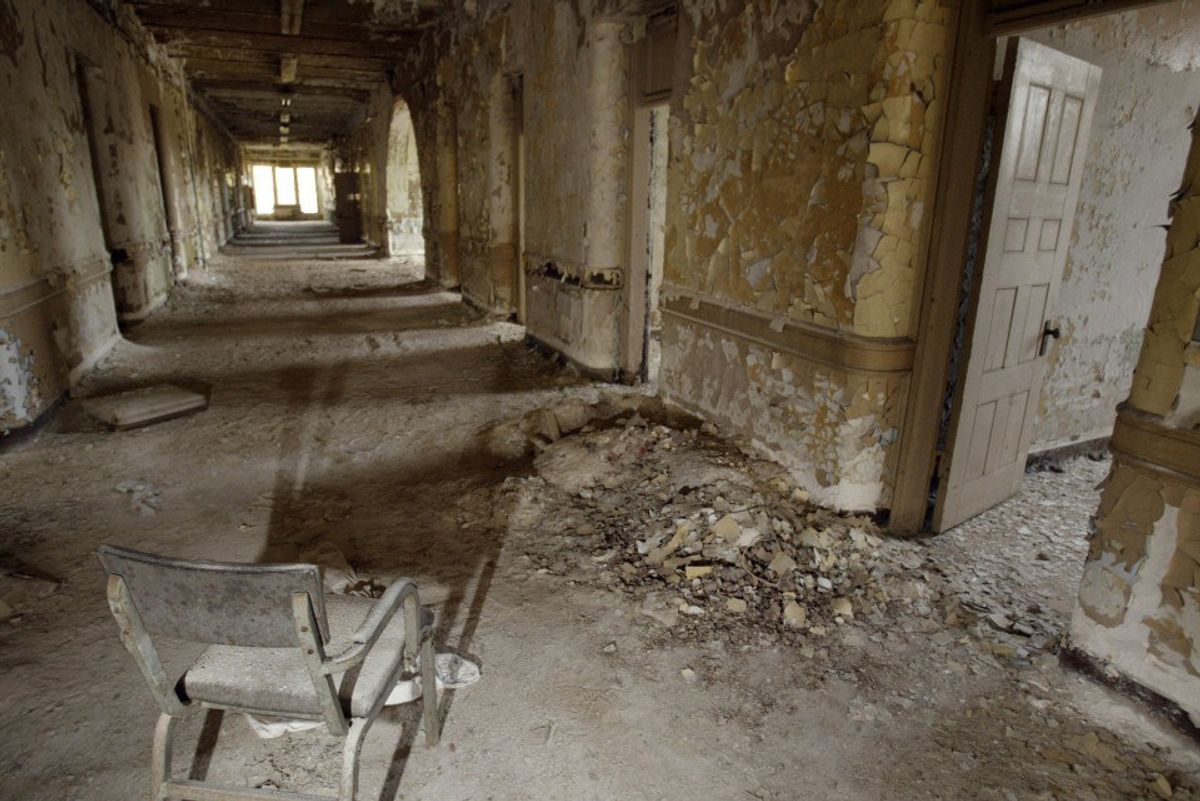 With Halloween officially being a week away, there is no better way to get excited and in the spirit of the season than to have a good scare. The United States has plenty of spooky and haunted places that will give you the creeps, and New Jersey does not lack in them. If you're brave enough to figure out for yourself, here are some frightening places in New Jersey that have been rumored to have ghostly sightings and paranormal activity.

The vast area of woods may look beautiful in the daylight, but once the sun goes down the creepy noises that can be heard deep within the forests scare people away. These woods are rumored the be the home of the legendary Jersey Devil. According to Weird NJ, actual sightings of this creature are less frequent, but those who caught a glimpse illustrate a weird collection of animal parts: the body of a kangaroo, the head of a dog, the face of a horse, large leathery wings, antlers like a deer's, a forked reptilian tail, and intimidating claws. Whether or not this creature exists remains unknown, but the Jersey Devil remains New Jersey's most enduring piece of folklore.

Among the swamps of the Secaucus Meadowlands, rising 150 feet above the flatland is a massive rock formation known as Snake Hill. According to legend, this rocky formation got its name because snakes were known to run rampant in the Meadowlands. Manhattan residents would travel to this area for snake hunts, but the snake population declined, and the township attempted to lift the moniker from the stone formation. In 1926 the name was officially changed to Laurel Hill. While it is currently a park, Snake Hill was the site of various hospitals throughout history, including a children's eye hospital, a penitentiary, and a massive complex of buildings that served as a psychiatric hospital.

Controversy surrounded the now demolished psychiatric hospital until recent days. Its graveyard which sat next to Snake Hill was used from the 1880s up until 1962, as the train station was under construction, construction workers discovered graves they had disturbed with their equipment. The building was brought to a halt, and it was found that over 4,000 deceased lie in the area. It is estimated that 10,000 undiscovered graves could lie in the area where construction work was not done.

On Mountain Road, there is a tree with several ax marks on it, the area surrounding its base untouched by snow during the winter season; this tree is nicknamed, "The Devil's Tree."The residents of Bernards township have many frightening stories surrounding this sinister-looking tree. They say that a farmer once killed his entire family, and then went to the tree where he hung himself. Another story tells that the Devil's Tree is a portal to hell guarded by a sentinel who drives a black pick-up truck, who will chase you down the road before completely vanishing.

This tree also served a dark purpose at some point in New Jersey's history. Bernards was once one of the central headquarters of the K.K.K. in New Jersey. The Bernard residents said they would hold their meetings throughout the hills and as per K.K.K. policy often lynch African American locals on the tree to set an example of their principles. With a history of death and murder surrounding this arbor, could it be haunted?

In the Port Monmouth section of Middletown sits the Spy House Museum. Although it is now called the Bayshore Waterfront Activity, the museum occupies one of the oldest houses in the state. Long ago known as the Seabrook-Wilson house, it was home to generations of two prominent Port Monmouth families of the same names.

The myth goes that when Mr. Thomas Seabrook lived in the house during the Revolutionary War, he would spy on British soldiers and hide their corpses in the cellar. Weird NJ writes that the house has been called the most haunted house in New Jersey; it has been reported to boast more than twenty ghosts, publicized in booklets, news reports, and archived accounts of visitors.

5. The Gates of Hell, Clifton

One of the scariest places in New Jersey is a series of storm sewers and tunnels with an arched stone ceiling located in Clifton Township in Passaic County nicknamed “The Gates of Hell." As the nickname suggests, many people believe this is the lair of the Evil One himself. Once you entered, you are engulfed by nothing but darkness. People who were brave enough to enter these tunnels have reported hearing knocking sounds and seeing a small human-shaped figure run out of the tunnel with super-human speed. The tunnels are littered with graffiti, one being of a sign with an arrow pointing to the storm sewers.

This ten-mile stretch of deserted road right off of Route 23 is rich in folklore. Ever since it was first established in 1905, there have been many rumors of devil worshippers hiding the trees and sacrificed goats and chickens littering the woods. There used to be a castle on the road, known as Cross Castle, in 1988 it was deemed unsound by the Newark Watershed and the remaining structure was torn down, but some pieces of concrete can still be found on the land.

In addition to these stories, there have been ones told of unearthly looking dogs, a sinister- looking wolf hiding in the bushes, a little boy throwing quarters up onto a bridge, and many reports of chanting, body bags, and albinos taking over the area.

These are only a few places that have been reported to be haunted in the Garden State. If you feel brave enough to try and explore these places, please make sure to do some research first, as many of these places may have laws against trespassing. If you want to learn about more strange and paranormal places in New Jersey, check out Weird NJ, for more information and stories.