Sizeism (And Why It's A Big Problem)
Odyssey
CurrentlySwoonLifestyleHealth & WellnessStudent LifeContent InspirationEntertainmentPolitics and ActivismSportsAdulting
About usAdvertiseTermsPrivacyDMCAContact us
® 2023 ODYSSEY
Welcome back
Sign in to comment to your favorite stories, participate in your community and interact with your friends
or
LOG IN WITH FACEBOOK
No account? Create one
Start writing a post
Health and Wellness 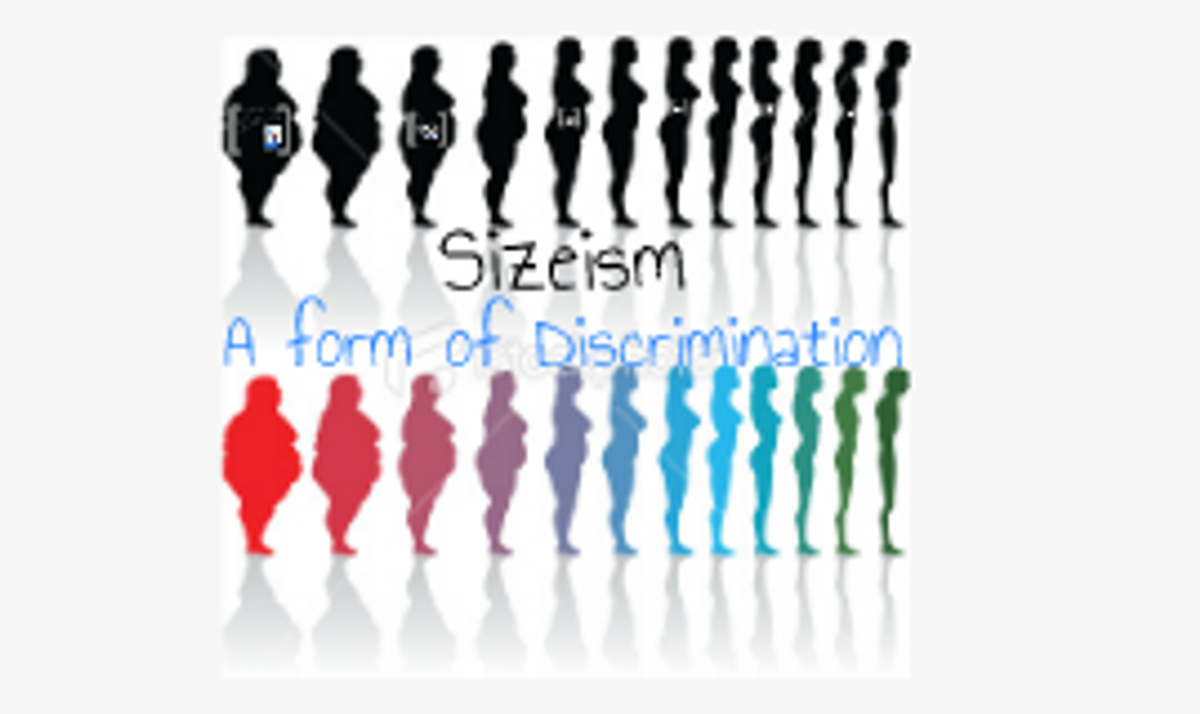 The Obesity Epidemic: everyone knows what it is. I can hardly remember a time when there wasn’t one. When I was young, I remember telling a fat girl in my class to ‘go on a diet’ because I heard from others that that was something all fat people should do, me being completely ignorant of its meaning. The girl, of course, got deeply offended, and I spent that recess sitting inside to think about what I did wrong. The thing was, however, that anything I did or said back then was a clear reflection of what society had taught me. Thinking back on it now, I realize the real damage the ‘obesity epidemic’ has caused, and it goes by the name sizeism: to be prejudiced against someone due to their size. Sizeism most noticeably affects fat people. Although it is usually ignored and widely accepted by most of society, sizeism is a HUGE problem with real consequences, and the ‘obesity epidemic’ is under the wrong name.

Now, let’s think to ourselves: Why is sizeism so widely ignored and accepted? In the good old USA, that’s pretty much a silly question. All you have to do is take a quick look around at society, and it becomes pretty obvious. Society hates fat. From weight loss fads, to thin, attractive models on magazines, to the infamous ‘obesity epidemic’ (notice how I put quotes on this every time? It’s meant to be sarcastic). In almost all forms of media, the people you will see most are thin, attractive supermodels supposedly representing what is ‘beauty’. This is intended to teach society what is accepted as being ‘beautiful’, and so far it has been working. What’s worse, society almost encourages people to walk up to someone heavier, and tell them how to live their life 'correctly'. Beyond the whole ‘weight loss’ fad, the media also contributes to this negative stigma. In most media, a character of a larger weight is almost always comic relief, extremely disgusting, always hungry or eating, or all of the above. The idea that being fat is unattractive, however, only started in the early twenty-first century, around the same time that the ‘obesity epidemic’ became a thing. So when it comes down to it, sizeism is widely ignored for this one reason: the common belief that being fat is unhealthy.

Here’s some facts on the ‘obesity epidemic’. It is a ‘disease’ based off of having a BMI (Body Mass Index) of 30 or more. However, it is also connected to a series of symptoms, such as “increased risk of diabetes, heart disease, stroke, arthritis, and some cancers.” (nlm.nhm.gov). The thing is, almost none of these symptoms are related to increased flesh, and are almost entire related to bad life-style choices such as unhealthy diet and lack of exorcise. So, get this: I, a male with an average BMI, could have the ‘obesity disease’, yet not be ‘obese’.

In other words, the BMI system is complete BS.

Although there are still studies that go back and forth between whether you can be both fat and healthy or not, there are still a lot of other things that make less sense. For example, the ‘obesity epidemic’ is usually said to be cured when one is no longer obese. However, studies have shown that most of those who are overweight lose weight, but they usually gain the weight back. Moreover, the benefits in losing the weight are significantly below those of having a healthy lifestyle. In other words, if someone has a healthy lifestyle (good diet, regular exercise), they can still be considered healthy no matter what size they are. So when it comes down to it, the ‘obesity epidemic’ should really be called the ‘bad lifestyle choice epidemic’. It may seem like a trite change, but this small inconsistency has some HUGE consequences (pun intended).

One of the biggest problems (pun intended) with sizeism is the negative stigma that revolves around fat people. As case studies have shown, a large majority of people have negative first impressions about fat people, believing them to be “lazy, greedy, un-healthy, etc.” (Chin, Jean Lay). Because of this, people will automatically have a low opinion of someone who is fat, even if they know nothing about the person. What this does is cause a significant amount of mental trauma on all those with prejudice against them -- mental trauma that can cause more health problems than what obesity proclaims. In other words, people believing they are helping fat people are causing even more harm against them, and are encouraged to do so.

Nonetheless, fat people are not the only people negatively affected by sizeism. There has been a significant increase in adolescents with anorexia and bulimia. Although the eating disorders are usually caused by a want of control, the majority of cases come from a fear of being fat. In other words, encouraging sizeism is causing a huge increase of anorexia and bulimia.

As one can see, the hype over this ‘obesity epidemic’ actually causes more problems than it thinks it’s solving. Sizeism is commonly called the last acceptable social prejudice, but ‘acceptable’ and ‘prejudice’ should never be in the same phrase, because prejudice of any kind is never acceptable. Many people have the mindset that ‘if they can do it, why can’t others?’, or ‘if I can control myself and diet, why can’t they?’ This mindset is wrong on many levels, making it seem as if everyone were the same person, when they aren’t. Everyone is different, and not everyone is so easily able to lose/maintain weight. Even if being fat is unhealthy, prejudice against fat people is not only unhelpful, but also makes their situation worse as well as that of society in general. So next time you see someone picking on a fat person, go ahead and tell them to pick on someone their own size -- literally.