Texas Sigma Chi's Fight Night Raises over $100,000 for Charity
Odyssey
CurrentlySwoonLifestyleHealth & WellnessStudent LifeContent InspirationEntertainmentPolitics and ActivismSportsAdulting
About usAdvertiseTermsPrivacyDMCAContact us
® 2023 ODYSSEY
Welcome back
Sign in to comment to your favorite stories, participate in your community and interact with your friends
or
LOG IN WITH FACEBOOK
No account? Create one
Start writing a post
Sports 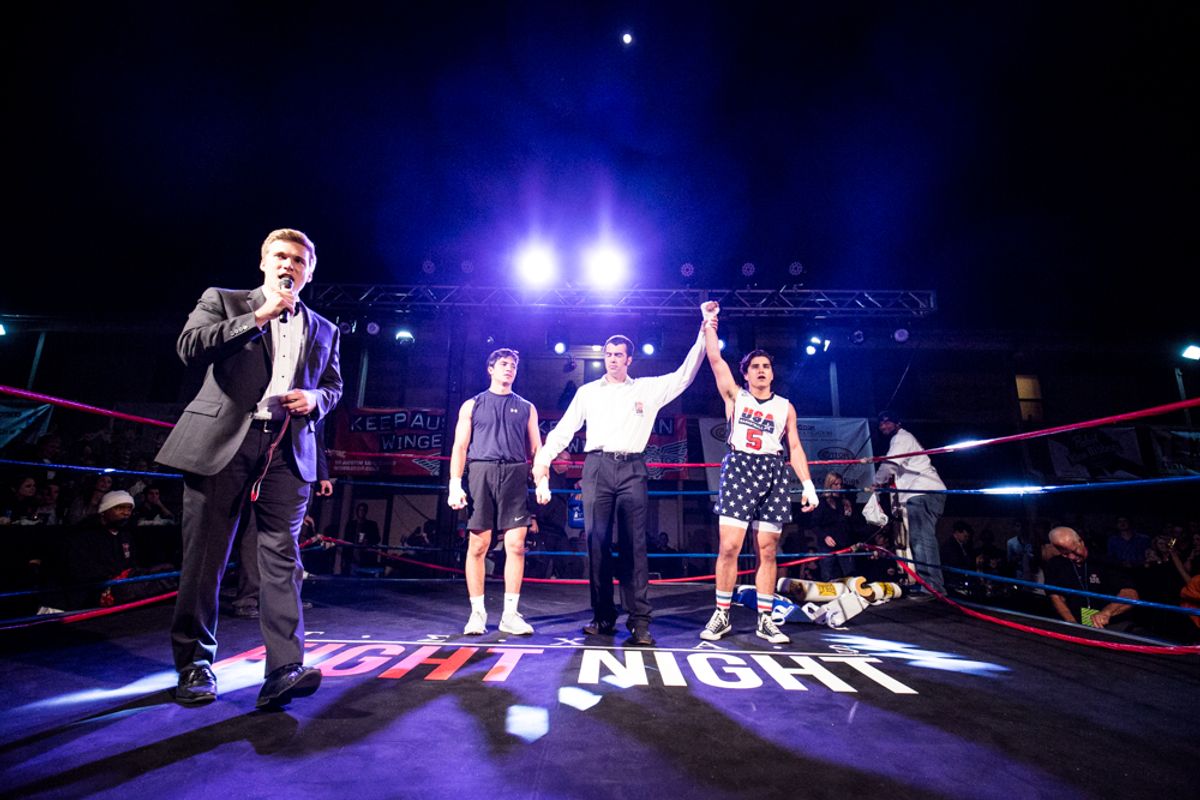 Sigma Chi’s been hosting the event since 1976, with the event’s previous fundraising record set last year at roughly $40,000. The event pits UT students against each other in an amateur boxing tournament at the Sigma Chi house, often on behalf of student organizations. It also features musical performances, with this year's headliner being 2 Chainz. Fight Night Chairman Derrick Porter attributed this year’s increased success to more support from alumni and donors. “The big spike was due to an increased participation with alumni and a few big donors that decided to step in,” Porter said.

Porter said in a press release that the total raised was $100,123, most of which will go to two national cancer foundations, The Andrew McDonough B+ Foundation and the Huntsman Cancer Foundation. He said in the statement that some funds will also go to two local charities, The 100 Club of Central Texas and the Boys & Girls Club at Wooldridge Elementary in Austin. More than 2,000 people attended this year’s event, which included 11 different boxing bouts representing 20 different campus organizations, according to the statement.

With the recent announcement of a crackdown on West Campus noise ordinance violations, some raised concerns about how it could affect the event, but Sigma Chi President Andrew Bain said that through in-depth communication with city officials, the event was able to go off without a hitch.

Bain said that Sigma Chi is going to try to outdo itself next year,and that he’s just blown away with by year’s success. He said he thinks that Fight Night is so successful because of what a unique experience it brings to Greek fundraising. “The idea of a boxing event is really cool,” Bain said. "It was a lot of fun. You know, you get your friends to riot around you to fight, and that draws in people that want to watch their friends or watch people they know.”

Landon Mosley, who just finished his term as Sigma Chi's philanthropy chair, said he thinks students getting to represent their organizations in the bouts plays a big role in the event’s success. “I think that really brings out a lot in people, being able to fight for your fraternity or your organization,” Mosely said.

Porter said this year’s Fight Night success really represents Sigma Chi well. “I think it’s a great demonstration of what the chapter’s all about,” Porter said. "It really embodies who we are as a group of young men. We work hard to be professional and be on top of our stuff and be organized.”

Porter said he believes the best part of this year’s Fight Night is still to come. “Now I get to have the real fun part, which is giving this money to all these people, all of these organizations,” Porter said.