Why Everyone Needs To See 'Hidden Figures'
Odyssey

Why Everyone Needs To See 'Hidden Figures' 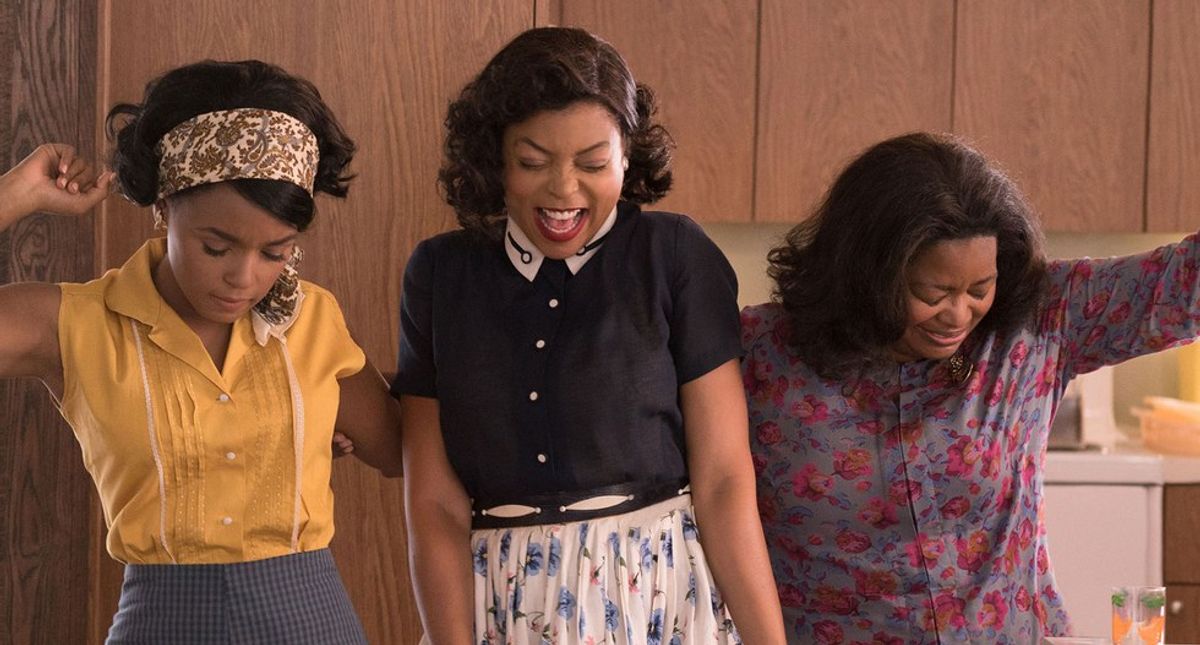 I'm sure we're all familiar with the usual themes that accompany most films about African-American history: slavery and civil rights. Up until recently, those were the only two topics that you saw. And while these are important parts of our heritage, seeing the same types of films over and over again makes the viewer weary.

I put all my hopes for the film on reserve until actually seeing it for myself this past week, and it is with great pleasure to say that it left me speechless. Absolutely, wonderfully speechless.

While I could go on about how the performances by all the actors were spectacular, or how the story was more refreshing than a popsicle in the dead heat of summer (which they both were), there was something else that made this film more memorable to me than any that I have seen before.

It was the experience.

I remember walking into the theater, finding my seat in the fifth row from the stairs as trailers played in the dark, telling myself not to get popcorn and then getting it anyway because denying oneself movie snacks is pure sacrilege, and then waiting...

I remember feeling Dorothy Vaughan's frustration as a librarian told her that she could not expand her knowledge in a place of public learning because the book she needed was not in the colored section.

I remember feeling Mary Jackson's pride as she earned the right to study to become an engineer, taking a front seat in a class full of young white men who stared and whispered amongst themselves, unperturbed and dignified.

I remember feeling Katherine Johnson's unparalleled elation when John Glenn returned to earth safely, knowing that because of her skills and efforts she had played a crucial role in an event that would change the course of history.

But most of all, I remember seeing people. People who looked like me, who had come to see game changers that looked like us. People with hopes like mine, whose worries were similar to my own, watching the story of three strong, inspirational women finally being told for the world to see. Women who were hard working, undeniably intelligent, brilliant, and nobody's maid.

And in this lies the source of what is probably my only criticism...

There could probably have not been a better time for this movie to debut at the end of a rather racially charged year, proving that our country is very much divided (though, I'm not quite sure who is surprised by this, we've always been divided). It's even better that it carried over into 2017, at what will most likely be known as the dawn of a new era in American history.

A new era that looms more like a shadow at dusk for practically half the country...

While I saw many people that did look like myself in the theater, I couldn't help but notice the significant lack of people who did not. This might be in part that I went to a later showing on a weekday; however, there's a part of me that feels like this is a common occurrence for any film that features a people of color as the leads.

Too many times I've heard from people that this country is somehow devoid of racial issues, which leads me to believe one of two things: A) they've become desensitized/unfamiliar with what racism looks and feels like for people of color today, or B) they live under a rock. A rock that has been placed in a box, which has been placed in another box, which has been buried in the backyard.

"Hidden Figures" displays the racial struggles that many people during that time faced, many people who are still alive and well today. Not only their hardships and successes, but the roadblocks, both outright and subtle, that worked to keep them from moving forward. It showed the way that oppression had changed from one form to another, and how, more often than not, the people who execute that oppression fully believe that their actions are not "against" others whatsoever.

This film showed us how to not only spot this, but how to deal with it from both ends. That even in the face of frustration, and disrespect, and injustice, to hold your head high and fight in any way that you can for what is right.

That either we all make progress together, or no one does.

And that is why I encourage everyone, EVERYONE, that if you are able to see this film, to do so. Because it not only has a story that everyone should see, but lessons that everyone can learn.