This article is about the search and rescue dogs of ground zero. 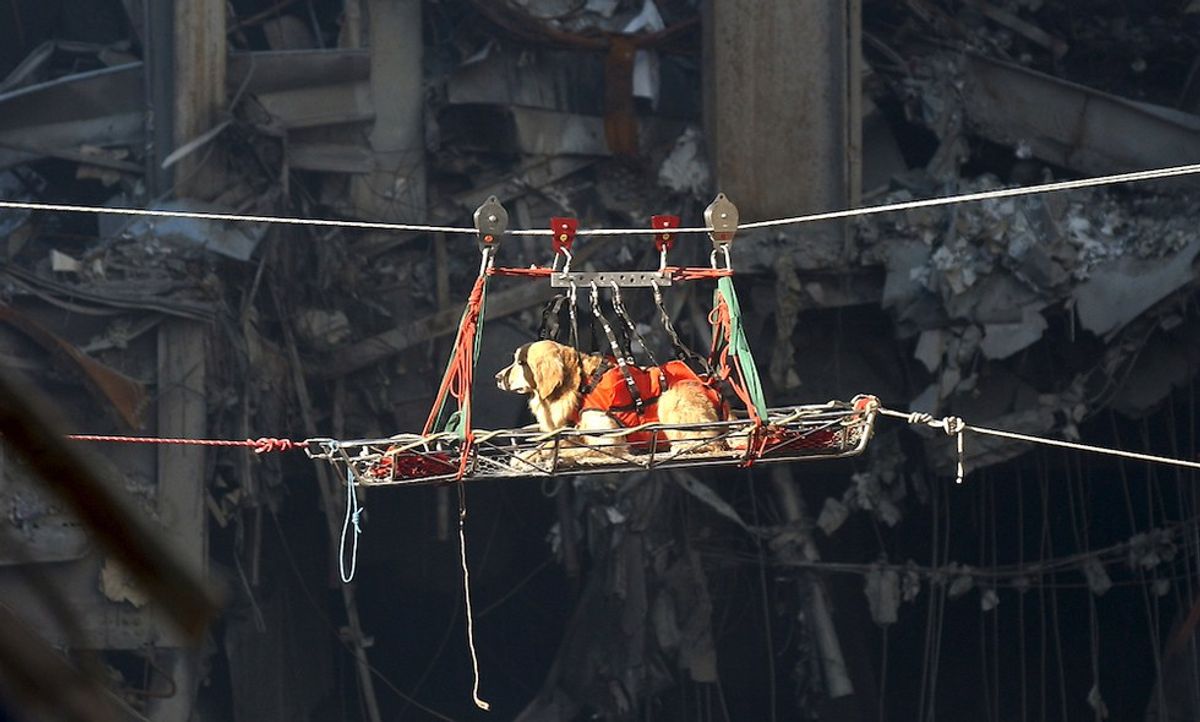 Sketch of Sirius, one of the working dogs at Ground Zero.

It was September 11, 2001. Every day, 50,000 workers and over 200,000 visitors fit into the buildings known as the World Trade Center. Their lives would be forever changed by 8:45 that morning, when the first plane struck the north tower of the World Trade Center. Amid the rubble and dust within the following hours and days, hardworking personnel from across the country gathered to help. Among all of the rescue personnel who responded to the scene, including firefighters, EMTs and police officers, an estimated 500-900 of those risking their lives that day had fur and four legs.

These four-legged heroes were the search and rescue dogs of Ground Zero. Over the course of 10 days, for 12-16 hours per day, canine and human worked tirelessly side by side in an effort to search for survivors and human remains. The dogs, lacking most of the protection that their human counterparts wore, worked tirelessly day in and day out to find victims. They climbed over hot rubble amidst massive clouds of dirt and debris, and they pushed their furry bodies to their limits.

These dogs were also a source of relief and comfort to everyone involved. A study was done that showed that individuals affiliated with the dogs that day and in the days after have had lower incidences of post-traumatic stress disorder (PTSD). Dr. Cindy Otto, DVM, PhD, and founder of the Penn Vet Working Dog Center said that every working dog involved that day was an “anchor” for victims and workers alike.

The Penn Vet Working Dog Center, founded by Otto, opened its doors in 2012 to train working dogs in order to set a standard for working dogs. It was noticed during the chaos of 9/11 that, since the working dogs came from all over the country to Ground Zero, some of the dogs had different training and different commands. The center was also opened to train dogs in order to give them healthier and longer lives. Every dog that comes through the center is named after a dog or individual who worked tirelessly on that day 15 years ago. As an example, Riley, a diabetic alert dog in training at the Penn Vet WDC, is named after a golden retriever search-and-rescue dog with FEMA’s Pennsylvania Task Force 1. As someone who is personally connected to the center, I can say with certainty that the center is one of the best things that came out of the dogs working on 9/11.

Riley, the golden retriever search and rescue dog on 9/11, being lifted away from a rubble pile.

Riley, named after the golden retriever search and rescue dog of 9/11, who is being trained as a diabetic alert dog at the Penn Vet Working Dog Center.

(from left) Chris Selfridge and Riley, Bobbie Snyder and Willow, Cindy Otto, Rose DeLuca and Logan, and John Gilkey and Bear.
From Your Site Articles
Related Articles Around the Web
Report this Content
This article has not been reviewed by Odyssey HQ and solely reflects the ideas and opinions of the creator.