34 Classic Scary Movies You Can Watch With Your S.O.

34 Classic Scary Movies You Can Watch With Your S.O.

So here is a list I have come up with varying levels of scariness. 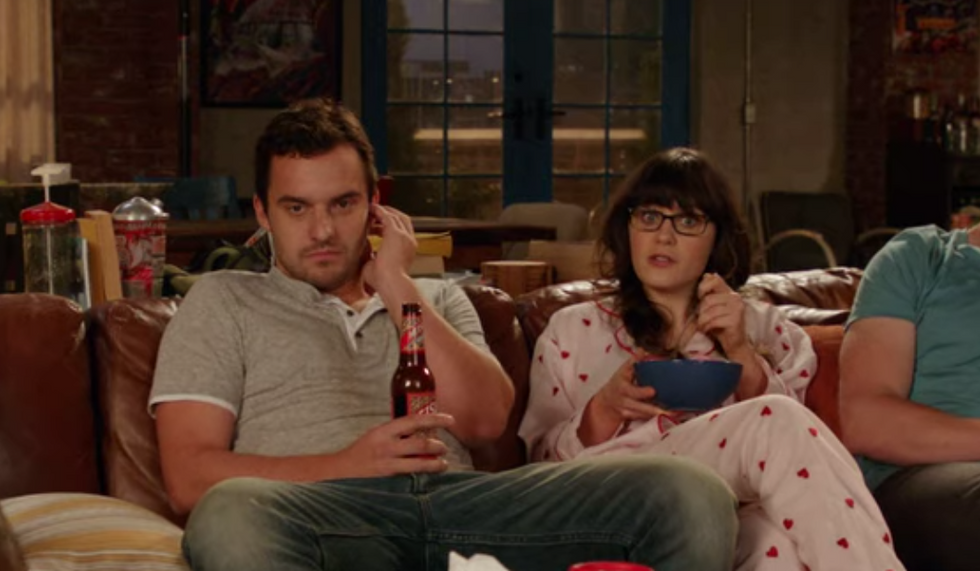 Since Halloween has passed, I know I should have posted this article sooner. Yet, watching scary movies doesn't have to be just on Halloween night. So here is a list I have come up with varying levels of scariness.

If you and your S.O want to watch a semi-scary horror film with some "family-friendly" imagery from the 80's, then this is a good movie to watch. I've watched this movie multiple times and I am always scared at the one part of the movie that you just know that there will be a creepy build up for. Also, the newer version for this movie did not a good job with this particular scary moment that I speak about.

This movie I didn't watch until this past Halloween with my boyfriend. This movie is a psychological thriller that is sure to creep anyone out. It is subtle in its mystery and reveals and the guy named Buffalo Billy should have gotten multiple awards for his very convincing performance.

This horror film by far I think will be the scariest one (despite that it is not a classic movie) on my list since I watched this with my friends from high school during my freshmen year of college (on Halloween night). This story has a psychological thriller element to it, but its intense atmosphere, build up, creepy imagery and tone will have you running for the hills and maybe afraid to sleep alone in the dark.

4. Hellraiser (any of them)

This series of movies has some gore in it but it is less scary than it is violent. It can be associated as a parody of gory horror movies since even I didn't find this movie to particularly scary. But that could have also been from being around my high school friends during halloween stuffing ourselves with candy and soda and pizza lol.

These movies I haven't particularly watched either but from what I've heard they are good to watch because they include some comedic elements. Also, the main actor/character throughout these movies is a cool action star and entertaining actor.

This movie I haven't seen either but it is similar to The Silence of the Lambs in that it is a psychological thriller.

When I first saw this movie, I immediately knew why Michael Myers was killing all these young teenagers. Most of them were very stupid, except for the main protagonist and the sister of Michael Myers. These two movies are classic movie legends (whereas the movie proceeding these either don't make any sense or don't continue the story in a fulfilling way) and it is a chilly moment to see anyone in Michael's way.

I saw this film also with a high school friend of mine and my brother since this movie has been reference many times as a horror movie classic. True be told, it hold up true that this is a classic horror movie. The possessed girl concept is very much captivating in this film and the creepiness of hearing a demonic voice come out of a 14 year old girl is still to this day unsettling.

I have yet to see this original horror movie classic by the King of Suspense, Alfred Hitchcock, who has made many other well known films such as Vertigo, The Birds, and Rearview to a View (all of which are great classical movies with intriguing twists and turns.

I have not seen this movie but it is another black and white film where the first appearance of zombies in film were introduced as a possible horror movie genre. It may be old fashion horror, however, if you are into the original style of cinema, check this movie out.

I have not seen this movie and I assume that a lot of people already know of this film series since it was a popular series like Halloween or Friday the 13th franchises. Though, like those film series, the movies do get a little silly or irrelevant to the original movie/story that was shown to the audience when it hit theaters.

This is another old fashion horror film that I have yet to see. The very thought of someone coming after you in the middle of nowhere with a chainsaw is already frightening but also that there is a family of cannibals is an additional frightening thing. Much like Night of the Living Dead, this is a old fashion sort of horror film.

I have seen both these movies and the first one is especially a masterpiece of cinema and horror. The claustrophobia situation and the badass Ripple carrying the story forward is a gut wrenching horror film that has made history in the sci-fi horror genre.

This is another Hitchcock movie, but I have yet to see this movie myself. However, if you watch enough of Alfred Hitchcock's movies, you'll start to notice his pattern of having a lot of his leading ladies dress a certain way and this movie it is evident. The Birds is creepy, surreal and suspenseful in an old fashion sense.

I have personally haven't seen this film but the concept of a man turning into a human fly is enough of a creepy idea as it gets. Check it out and there was a remake made which I have heard is good as well.

Hayley Kosan - A Letter to Doctor Stuart on Vimeo vimeopro.com

I have not seen this movie but it is a dark psychological thriller diving into the mind of a disturbed young women. It is a great psychological horror film with gothic atmosphere that will send shivers down your spine.

I saw a few scenes of this movie when I was younger and it was a creepy concept for a creepy movie. A alien life form that can take on the body of anyone is sure to keep you on your feet.

This movie is a horror movie classic. If you have not seen it, check it out and, luckily, we still have time before we can go back in the water once you finish seeing this sea thriller about a killer shark.

Another classic horror film, directed by Stanley Cupric who also directed 2001 A Space Odessey (another film classic that inspired a lot of Sci-Fi films). I have seen this movie and it is a great mix of gore, psychological thriller and slasher film which demonstrate both the actors and the director's talents.

This was the first "horror" film to come out back in the early 20th century. And if you had noticed, this is what inspired the later Dracula movies (which you should also check out when you get the chance). It has great atmosphere and cinematography.

I have not seen this movie but I have heard good reviews on it so check it out when you can.

I have not seen this movie, but have heard good things about it.

I have not seen this movie personally, but I have heard good things about it.

I have heard of this title before, but have never seen the movie. Go check it out though since I want to figure out why this curse exists.

This movie is directed by the same director as The Zodiac. Both films are psychological crime films following symbolic homicides. However, Seven is known for it's amazingly diabolical twist ending and its amazing story.

This movie I haven't seen, but it is an intense thriller of a fan's love for a writer's work goes too far. If you are into Stephen King stories, this is a great movie to check out.

I have not personally seen this movie, but I have heard good things about it. Check it out when you can.

These are the original trio of the monster horror films. If you are into monster movies, these are great to check out when you get the chance. They also have spin off films and films where they actually meet one another to square off if you are interested in how different monsters interact off one another.

I recall when I was younger seeing Tremors on the TV and being creeped out by the idea of large worms engulfing people whenever they made a sound. This movie series can be confused with Dune but they are two completely different films. Tremors I found out also has multiple movies so if you like the first one, there are more that you can watch.

I have not seen this movie but check it out since it has Vincent Price, the man that was in Thriller.

This movie I have seen snippets of, particularly the children with glowing eyes. When I get the chance I'm going to watch this movie and so should you.