After being encouraged to ditch their progressive sound by their record label, Rush does the opposite and makes a progressive rock masterpiece 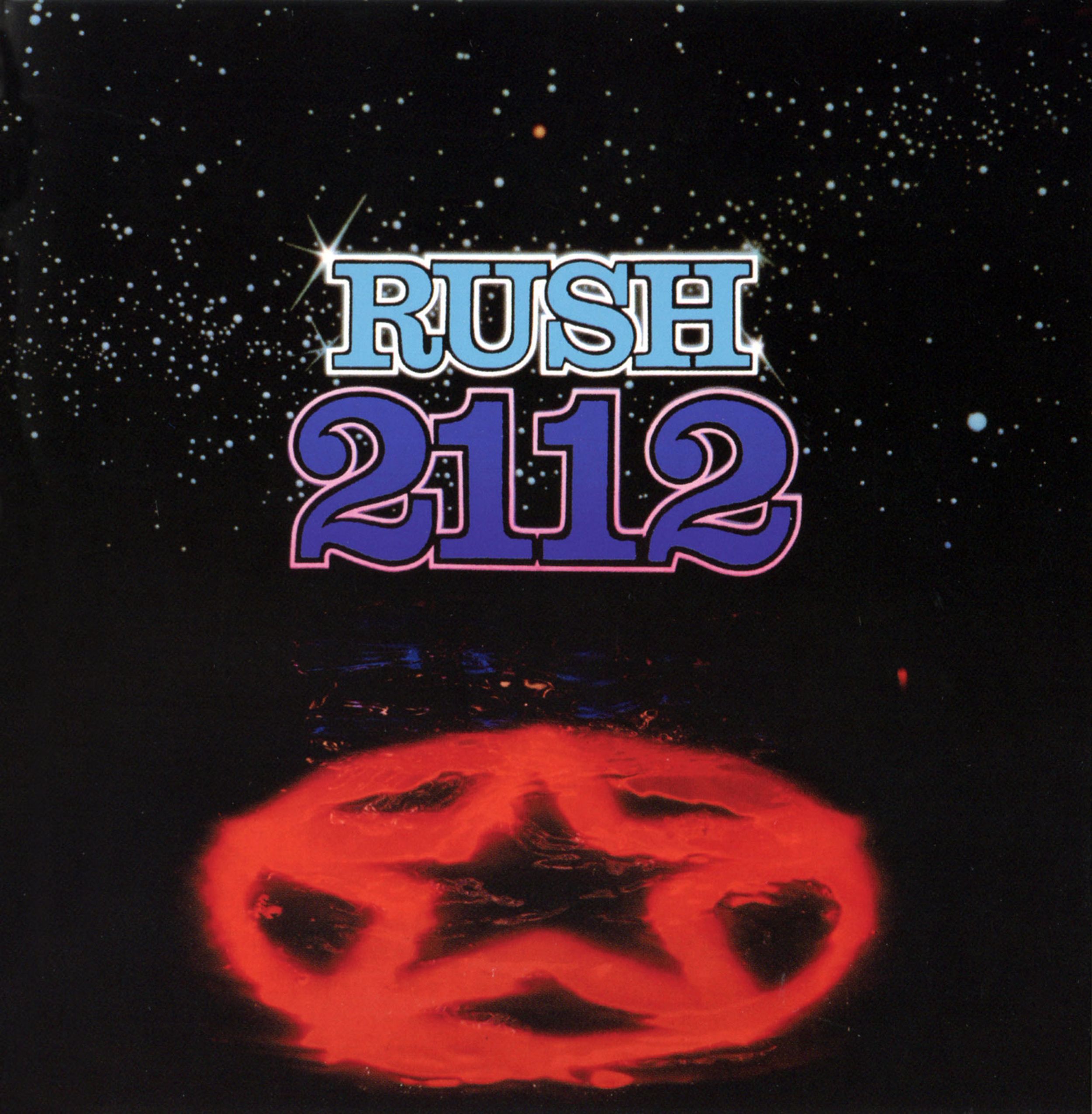 2112 is the fourth studio album by Canadian rock band Rush, released on April 1, 1976, by Mercury Records in the United States. Its total length is 38:42. The band's lineup included vocalist and bassist Geddy Lee, guitarist Alex Lifeson, and drummer Neil Peart.

Rush's previous release showed a major shift to a prominent progressive rock sound. Continuing that trend, 2112 has a self-titled epic conceptual piece that makes up about 20 minutes of the album, despite the record company's wishes to stop making conceptual pieces and do a more mainstream approach.

The album was a commercial breakthrough for the band as it reached #61 on Billboard 200 chart. It has since gone 3x Platinum in the U.S, 2x Platinum in Canada and Gold in the U.K. The strengths of this album are the heavy progressive style, the guitar and bass work, the impressive vocal range of Geddy Lee, and the epic 2112 that demonstrates the band's innovative storytelling and songwriting. There are no glaring weaknesses on 2112. Here are my thoughts on each track.

"2112" is a really cool song about a dystopian future in the year 2112. It begins with some really cool synth effects that set the futuristic mood of the entire song. Then, Lifeson comes in with a simple guitar riff to start the song and later Geddy and Neil begin to play their instruments as well. It's a fantastic buildup for a great song. I love Alex's guitar riffs to start this song off. Then, he plays an epic solo with so much emotion and soul, it's like the guitar is speaking to you. Right after his solo, the band plays a really catchy part, with Alex's guitar riff leading the way. Then explosions are heard and an acoustic guitar plays as Geddy's voice is finally heard.

He sings with such passion during this part. I love his singing as he tells about the high priests and how they control the world that Earth has become. His vocals have never sounded this good prior to this release as he has matured a lot as a singer. Lifeson's guitar riffs are heavy and Neil's drumming is captivating.

Then, the next part is about the discovery of a guitar. It has a beautiful sound of water flowing and a soft acoustic guitar. This is a nice soft part of the song that acts as a good break from the heavy instrumentation of the last part. Geddy begins to sing lyrics about the discovery of a guitar by a man who has never seen one before. Then the acoustic guitar playing becomes very happy and upbeat sounding. The next riff that is played is very joyous to go along with Geddy's lyrics about presenting the music to everyone.

Then he sings about the presentation of the guitar to the high priests to begin the next part of the song. The contrast between the acoustic guitar while the happy man speaks about the guitar he found and the heavier guitar when the priests dislike the guitar shows the different moods of the two characters in the song. It really is brilliant songwriting. The guitar solo shows brilliant speed and precision from Lifeson, who uses some really cool guitar effects. This solo is masterful.

The next part of the song begins with a very somber tone as the man is unhappy about no longer having his dream of playing music. Then in his dream, he is shown the works of great musicians who have great creativity. Then he describes how they left our planet long ago and will come back to change the current world. He then realizes it was just a dream, and that none of these things will happen and commits suicide.

Then Lifeson plays a booming guitar riff before playing another brilliant solo that really just speaks to you as a listener. At this point, Lifeson is proving why he is among the best in music. Lifeson, Geddy, and Neil all begin playing spectacularly as the song concludes with the elder race returning and assuming control as they will introduce music back into this dystopian society. "2112" is often characterized as Rush's best song and for good reason as it tops anything the band has done up to this point in their discography.

"A Passage to Bangkok" begins with an amazing guitar riff that is one of my favorites from Lifeson. Geddy's vocals are calm but impressive. Neil Peart's drumming is excellent as usual. This song is happy, upbeat and a nice change of pace after an epic full of constant mood changes. The guitar solo is so great, I love the guitar effects and the whole feel of the entire song. It is full of so much emotion and skill. Geddy's bass playing is also very good during this song. "A Passage to Bangkok" is an excellent song with lots of great playing from Rush.

"The Twilight Zone" has some pretty odd lyrics about strange occurrences that have no logic to them. The chorus is very psychedelic and is sung in an odd voice that is pretty unsettling. I love the guitar work of Lifeson on this track, his guitar has such emotion. The guitar solo also has a very psychedelic feel to it and fits the song perfectly. This track won't wow anyone, but I really like the simple, but effective feel it has.

"Lessons" begins with a speedy acoustic guitar riff from Lifeson. The bass is very prevalent from Geddy and his vocals are varied on this track. I love the bass work during the chorus, Geddy's singing is full of passion and so is Neil's drumming and Alex's guitar playing. The guitar solo isn't my favorite, but it's still pretty good. Most find "Lessons" to be the weakest track on the album, but I think it's a very solid track from the band.

"Tears" is a really great attempt by Rush to make a different track than what we're used to hearing from the band. It has beautiful lyricism and I really enjoy the bass playing by Geddy Lee. His vocals on this track aren't very good, but they get the job done. The acoustic guitar playing and the entire atmosphere of the song just further demonstrates Rush's ability to make varied types of music. "Tears" is the weakest song on the album, but it has certainly grown on me over the years.

"Something for Nothing" is the hard rocker from this album and is perfectly placed at the end of the album. It has a great message about needing to put in work in order to get rewarded. Nothing comes free is the whole message of the song. Geddy's bass playing and vocals are great on this song. Lifeson's guitar riffs are perfect for this style and Neil's drums really come through. I love Lifeson's solo, it may be my favorite on the entire album. The whole song has a great message and is full of energy, I absolutely love it. "Something for Nothing" is an excellent closer to a great album.

Rush's 2112 is the first classic Rush album. While their last album had a complete stylistic shift to a progressive sound, this album perfects that sound. This album is one of Alex Lifeson's best albums and further demonstrates the elite player he is. Geddy Lee has very good bass lines and energetic vocals throughout the entirety of this record. Neil Peart's drum playing is fantastic and the lyrics he wrote for the record are among his best moments as a story teller.

Caress of Steel was a very good album, but it had flaws throughout. This album took the sound and ideas from Caress of Steel and improved upon them in a huge way. I really enjoy 2112 and consider to be one of the best progressive rock albums of all time. It has also influenced so many bands from Dream Theater to Porcupine Tree. It is Rush's first album that I can call a masterpiece.

Caitlyn Morral
St Bonaventure University
1360
Wordpress
Odyssey recognizes that mental well-being is a huge component of physical wellness. Our mission this month is to bring about awareness & normality to conversations around mental health from our community. Let's recognize the common symptoms and encourage the help needed without judgement or prejudice. Life's a tough journey, we are here for you and want to hear from you.