This Is Not a Compliment. 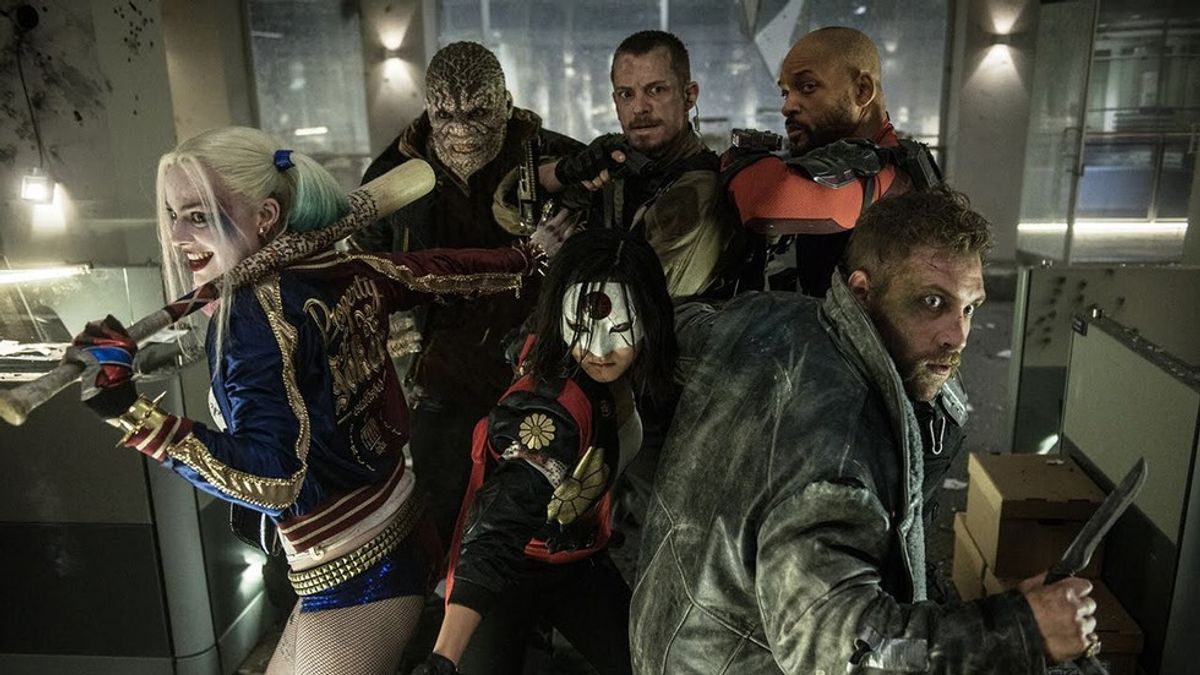 Last night, I walked into Suicide Squad, DC's latest effort to be Marvel, with very low expectations. With a current score of 26% on Rotten Tomatoes (for comparison, Batman v. Superman: Dawn of Justice has a 27% (which is hilarious)), I tried very hard to put myself in the mindset that this would be two hours of people punching other people in the face with guns. It worked for me with the last Hobbit movie, I was sure it would work this time.

Funnily enough, as Thorin says in The Hobbit: "I have never been so wrong in all my life."

I'm going to go out on a limb, with five months still left in this year, and say that Suicide Squad is the most disappointing film of 2016. There are a number of factors as to why this could be, and I shall now put them in convenient list form:

2. The copious amounts of hype, and the excellent (read: deceiving) marketing campaign.

4. Zack Snyder's involvement at all.

5. The waste of talent from a mostly stellar A-list cast.

If I were to pick just one from this list, I would say that the studio involvement is the biggest protagonist in the film's structural failure. While I do understand that the whole DCEU is a very important property to the studio, Warner Bros. is rushing its developments way too fast. This film was basically slapped together like a sub-par sandwich in order to meet its slotted release date. That showed through the astonishingly sloppy editing, the bomb-drop that was disappointing writing from the otherwise stellar David Ayer (End of Watch, Fury), and the laughable use of slow motion in the film's climax.

There also was an unbelievable amount of hype surrounding this film, most of which came solely from the merchandise section of your local Hot Topic. Part of that had to do with the exceptional marketing campaign it put out to the "Hot Topic crowd". That's another problem with Hollywood; why the hell are there so many trailers that are better than the actual finished product? I Am Number Four, The Woman in Black, The Great Gatsby? That kind of deceit should not be aloud. But I digress.

What probably disappointed me the most (besides Ayer's involvement in such an awful script) is the complete disregard of both the actors' abilities and the characters' backgrounds. It felt like the storylines for each character went both too far deep and not deep enough into their histories. The opening scene, where Amanda Waller describes every villain's pasts, felt like it took forever, because it wasn't interesting. Actors like Will Smith (who was peak Will Smith here, which I liked), Margot Robbie (very good, but way way way way way too sexed up) and Cara Delevingne (who I do think is a good actor, but had very little to work with; her character's last words were verbatim, "Do it. You don't have the balls.") As for the Joker, he was such a key figure in the ads that they might as well have named the movie Suicide Squad: Jared Leto's In This! Instead, we get barely ten minutes of his personification of the Clown Prince of Crime in the entire film, because they ended up cutting most of his scenes. That really makes his insane method acting look not only gross as hell, but also quite alarming.

Which leads me to my next point; anyone who went to see this movie and came away thinking that Harley Quinn and the Joker are relationship goals has been failed by Hollywood. They seriously undersold how psychotically abusive Mistah J is to Harley. He literally manipulates her, shocks her into insanity and makes her swan dive into a vat of chemicals to prove her love for him. And this is before he literally solicits her to Common (yes, Common is in this movie, too) because he paid her a compliment, and then kills Common because he wouldn't have sex with another man's girlfriend. Then the movie basically shrugs that off and instead depicts the Joker as a man determined to save his beloved, and Harley head over heels in love with her Puddin', completely oblivious to the monstrous things he's done to her. That's not Stockholm Syndrome at all, and I think that it sends a very unhealthy message.

Finally, since I have to cap this off at five key problems, or else I would still be typing by the time this is supposed to be published (apologies to my editors), Zack Snyder has taken the whole DCEU in a sour direction. Watchmen was a great superhero movie (in the opinion of someone who hasn't read the graphic novel), but it seems that we're getting these films from the same man who directed Sucker Punch and 300: Rise of an Empire. Snyder is a very visual director, which is great in all aspects except everything but visuals, because it's all he focuses on. But even the special effects in Suicide Squad were something to be desired. If Snyder really cares about this project and wants it to be a serious competitor against Marvel, he needs to step back and let more accomplished directors and producers figure out what the Universe needs. Luckily, Ben Affleck directs and produces the next standalone Batman movie, which is a great start.

In conclusion, I can describe my feelings about this film in this analogy: It's the end of the lightsaber duel between Anakin Skywalker and Obi Wan Kenobi in Episode Three of Star Wars. Suicide Squad is Anakin on the bottom of the hill, his legs cut off and his entire body on fire, screaming in agony and fury. D.C is Obi Wan, having the higher ground, calling down to him in anguish. "You were the chosen one, Deadshot!" D.C cries, tears streaming down his face. "It was said that you would destroy the critics, not join them! You were to bring balance to the Extended Universe, not leave it in darkness!"

Lava bubbles in the fiery river below, engulfing Suicide Squad in its waves as he howls into the night."I HATE YOOOOOOU!"

This film tried so hard to be the hero it was destined to be, but instead turned to darkness. Suicide Squad is Hayden Christensen. We have failed. But the question is, will it take three more films for balance to be restored, or will we learn from our mistakes before the entire DCEU gets Hulk-smashed into oblivion?