Review: "Before the Flood" is Leonardo DiCaprio's Rallying Cry for a Better Earth

Review: "Before the Flood" is Leonardo DiCaprio's Rallying Cry for a Better Earth

The most important film of the year is a sobering call to action for the sake of our planet. 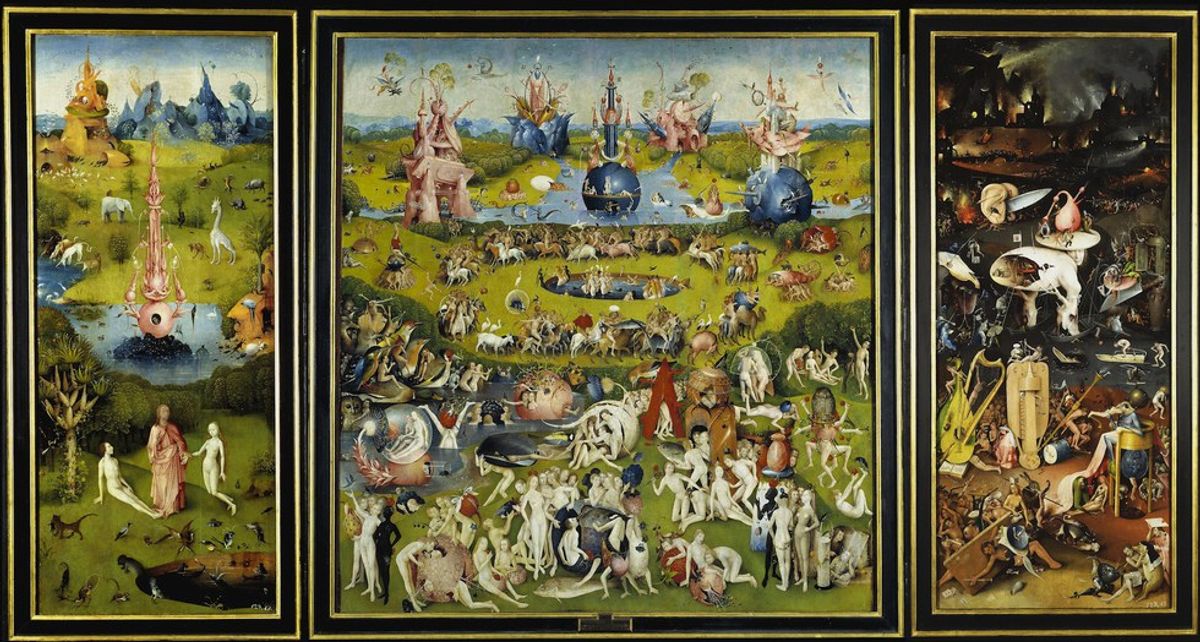 "My first visual memories are of this framed poster above my crib," begins Leonardo DiCaprio in his new documentary, Before the Flood. "I would stare at it every night before I went to bed." The poster he's referring to is a print of Hieronymus Bosch's sixteenth-century painting, "The Garden of Earthly Delights." Painted on three oak panels, each one tells a story. "In the first panel, you have Adam and Eve in the garden of Eden, birds flying off in the distance, elephants and giraffe and lot of religious iconography. The second panel," explains DiCaprio, "is where it becomes more interesting." This second panel, entitled "Humankind Before the Flood" by Bosch, is where DiCaprio's incredible journey, and essentially ours, takes place.

This film is a showcase of the best work of Mr. DiCaprio's life; as an environmentalist. That accomplishment, to this writer at least, is a lot more satisfying than seeing "Academy Award Winner" above his name. It spans over the course of three years, as we follow DiCaprio across the world as he learns more about the effects climate change has on our lives. In one scene, he recalls his introduction to the concept of global warming, during an interview with then Vice President Al Gore during DiCaprio's early twenties. "[Vice President Gore] drew a picture of our planet on a chalkboard, and then he drew the atmosphere around it. He said, 'This is the most important issue of our time.' I had absolutely no idea what he was talking about."

Gore used our emission of carbon dioxide as an example. "All our modes of transportation... the way we produce our food, the way we build our cities, nearly everything we do releases carbon dioxide," and, as countless studies have shown, CO2 gases are a leading contributor to climate change. This will lead to more dangerous weather conditions, floods, droughts, wildfires. "It sounded like a nightmarish science fiction film," says DiCaprio. "Except everything he said is real, and it's happening right now."

DiCaprio has the facts to back it up, too. He talks with numerous scientists (like Michael Brune, executive director of the Sierra Club), world leaders (such as President Barack Obama) and experts (like Elon Musk, CEO of Tesla) to understand the dangers that climate change has on all of us. The most powerful example is when he and Dr. Piers Sellers, astronaut and director of NASA's Earth Sciences division, literally map out the current state of climate change on our planet, using a model simulation of Earth. Dr. Sellers, like Mr. DiCaprio, has his own reasons for caring so much about the issue. "At the end of [my time in space], I became immensely more fond of the planet, which I never thought about when I actually just lived on the surface. And I'm also kind of fond of the people there, too. It's like being taken away from your family and coming back, and I wish it all well."

On a professional scale, what Dr. Sellers experienced above our planet is very sobering. But it's more personal than that, as well. "Just before Christmas, I got told I got pancreatic cancer, stage four, so it's elsewhere in me, not just in one place. So the odds are I won't be around for very long... So that's really motivated me to think about what's important to do, about what I can contribute in the time I have left."

There are other artistic choices that make Flood the most potent documentary I've seen since Gasland. DiCaprio's narration, both startlingly honest and cynical, is mesmerizing, because it's apparent that he isn't reading from a script. He admits that his outlook is pessimistic, and that admission is almost refreshing. Speaking of the activism surrounding the issue twenty years ago, he says, "At the time, there was this huge push to get the word out... Back then, everyone was focused on small, individual actions, and it boiled down to simple solutions, like changing your lightbulb.

"It seemed like a positive thing at the time, you know?" he says, and you can almost hear him shaking his head as he says it. "Changing your lightbulb."

Others around the world share Mr. DiCaprio's cynicism. Indian political activist Sunita Narain does not mince words when talking to DiCaprio about the three hundred million people (equivalent to the population of the United States) in India that are without power. When asked about India's large reservoir of coal, the primary source of fuel in the country due to its low expense, Narain addressed the United States. "You have to think about this from this point of view: if you created the problem in the past, we will create it in the future. We have seven hundred million households who cook using [cow dung patties] today. If those households move to coal, you have that much more use of fossil fuel.

"If anyone ever... tells you, 'Oh, the world's poor should move to solar' or 'Why do they have to make the mistakes we have made?'... If it was that easy, I would have really liked the U.S to move toward solar, and they haven't. Let's put our money where our mouth is." Narain also warned DiCaprio, "[American] consumption is really going to put a hole in the planet, and I think that's the conversation we need to have."

This film is also, at its core, about discovery. As we follow DiCaprio from the flooded streets of Miami, to the polluted streets of Beijing, to the Tesla company's Gigafactory 1 in Nevada, to the Vatican City to meet with the Pope, we see what he's seeing. When he learns, we learn, too. Mr. DiCaprio is the cool earth science teacher, taking us on a field trip, and it is up to us to be his eager students, willing to learn.

Before the Flood doesn't end on a hopeful note that documentaries like Food Inc. do. That seems to be a trope specifically set for the documentary genre: "Things are bad now, but you can do so much to fix it!" Instead, it tells you, "Things are bad, they're getting worse, and unless we act right now, things will never be the way they were again." And that's perfectly okay; a situation as dire as this needs to be passed off as dire. If you aren't sitting at your computer screen terrified by the time the credits roll, you need to go back to the beginning and watch again.

Luckily, it is very easy to watch. Before the Flood is available to stream everywhere; on Facebook, Twitter, the National Geographic website, YouTube, and more. It is somehow still debated that climate change is the number one threat facing us today, so the fact that this film is so accessible is a good first step to combat the stigma and ignorance surrounding the issue.

The third panel in Bosch's "Garden" shows a "twisted, decayed, burnt landscape," as DiCaprio describes it. "What haunts me is that last panel... with the charred, blackened skies. A planet that we collectively have left to ruin." It represents that planet that we could leave to our children, our grandchildren, those who represent our species. "The question is," he states, the question that this, the most important film you will watch this year, demands that you answer, is: "Can we change our course in time?" In a time when Native Americans are literally fighting our own police force for the right to clean water for everyone, when we could be facing the biggest mass extinction since the ice age in as little as twenty years, it is up to us, Mr. DiCaprio's eager students, to do our homework.