A Republican Take On Betsy DeVos
Odyssey
CurrentlySwoonLifestyleHealth & WellnessStudent LifeContent InspirationEntertainmentPolitics and ActivismSportsAdulting
About usAdvertiseTermsPrivacyDMCAContact us
® 2023 ODYSSEY
Welcome back
Sign in to comment to your favorite stories, participate in your community and interact with your friends
or
LOG IN WITH FACEBOOK
No account? Create one
Start writing a post
Student Life

A Republican Take On Betsy DeVos

As a proud alumni of public schools, I strongly urge the Senate to vote against appointing DeVos. 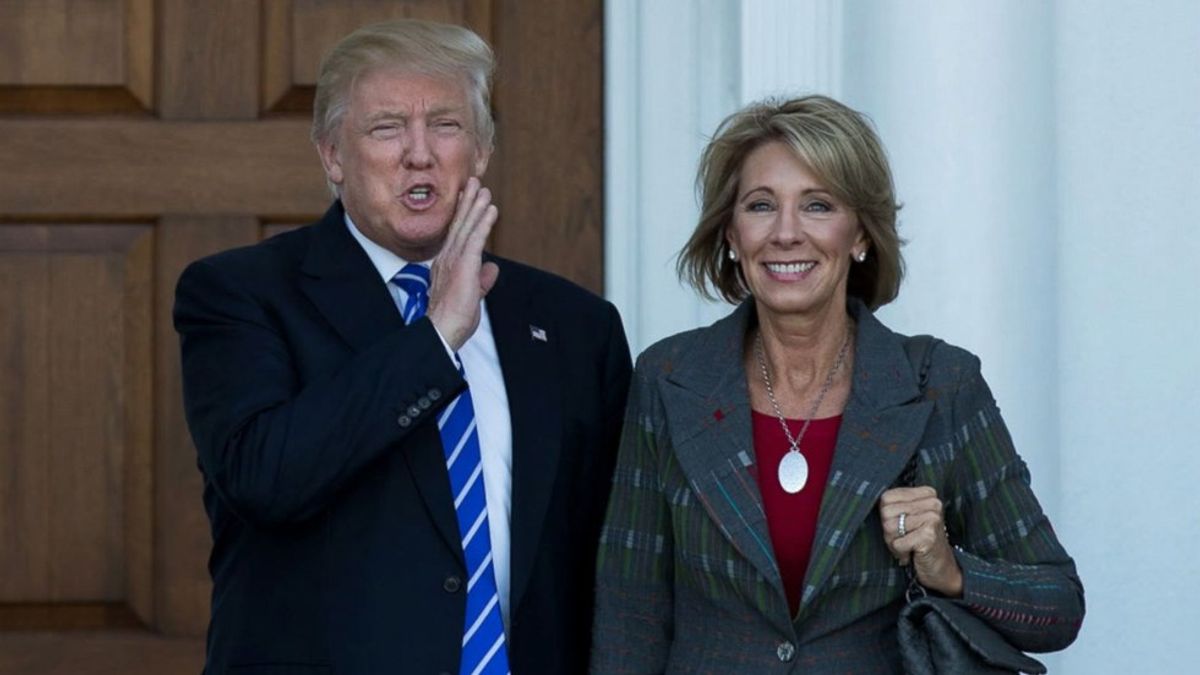 As many of you know, Betsy DeVos was chosen by President Donald Trump to head the Department of Education. While some people are happy about this pick, many have voiced their concerns and issues with this decision. As a Republican, I feel as if I have a duty to respond to this increasingly controversial issue regarding a very important cabinet appointment. Education is one of those issues that transcends party identity and affiliation, as it should. Despite being a member of the same party as the President, that doesn't mean that I have to support everything he says or does. Instead of having people label me because of my party affiliation, I'm going to take the time now to explain how I really feel:

Betsy DeVos is far from the perfect candidate for heading the Department of Education. Yes, she is a Republican and was appointed by a candidate who's goal is to "drain the swamp," but the choice to appoint her is far from draining any swamp. The DeVos family happens to be one of the largest Republican political dynasties in the country, specifically within the State of Michigan. During the 2016 election, DeVos poured tons of money into candidates such as Jeb(!) Bush and Marco Rubio, but was never a supporter of Donald Trump and was even quoted as saying that he was an interloper who does not represent the Republican Party. The segment of the Republican Party that I consider myself a part of today completely rejects the power and money of those at the top in influencing elections. Why is it then that we Republicans should be supporting someone who is exactly what we have campaigned against for so long? It's obvious that her appointment has to do with the idea of "pay to play" politics... something that is destructive to our political system. Besides the fact that she could potentially take the role of Secretary of Education because of her family's influence, Betsy DeVos is also woefully unprepared and unfit for it.

Now that the Republican Party is fully in charge of the driver's seat in Washington D.C., the time to move this country in the right direction is now. However, when President Trump makes a decision like this (to make DeVos the Secretary of Education) then the future seems quite cloudy. Firstly, DeVos has never attended public school and nor have any of her children. When the majority of people in this country attend public school, what message does it send when the figurehead of the education system has no experience with these types of schools at all? Mixed with her ignorance of how the education system works, DeVos has advocated for school choice. Don't get me wrong, school choice is something that I support very aggressively, but her view is that this should essentially overtake the public education system throughout the country. How can we allow someone with such destructive and ignorant policies to run a department that needs so much help right now? As a proud alum of public schools, I strongly urge the Senate to vote against appointing DeVos as the Secretary of Education.

QueenRadhi
The State University of New York at Stony Brook
3293