And I'm not talking about her physical appearance... 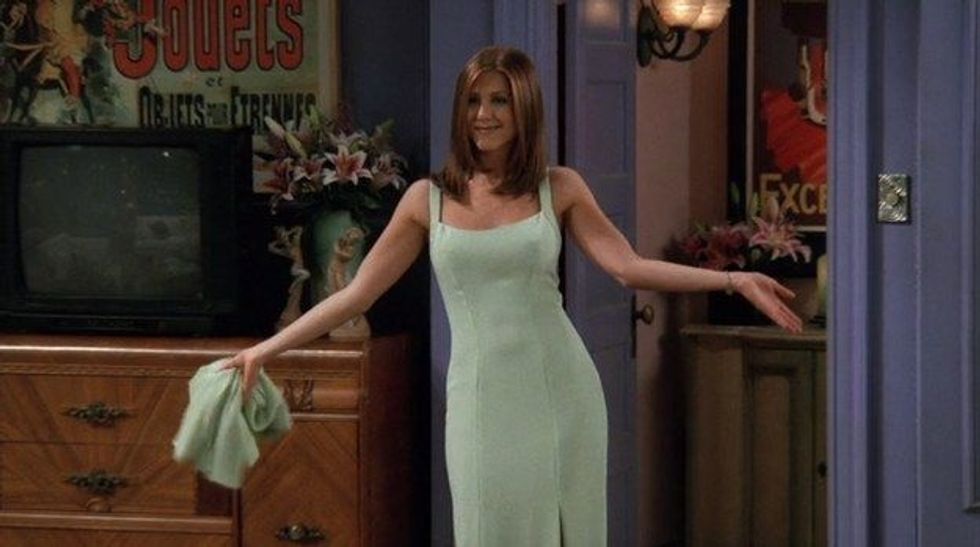 Rachel Green. The beloved "Friends" character. The icon for fashion and hairstyles in the '90s and early 2000s.

The girl who went from spoiled brat to successful businesswoman. It wasn't a physical glow-up that had her peers and future generations be drawn to her, but her mental and emotional one.

She forged her own path, she said no to all of the things society and her parents wanted for her to make herself happy, she went from nothing to a success, and she found happiness in her career and life on her own terms. Now if that's not something to aspire for, I'm not sure what is.

The pilot and first few episodes of "Friends" go through Rachel's decision to not get married to Barry the orthodontist and her becoming independent from her parents' bank accounts. In the first couple of episodes, she's relying on old and new friends to be her support system without a clue as to what the real world is about to throw at her.

She not only lands a part-time job that gets her by, but starts to figure out how to live on her limited budget with little help around her. Just two seasons later, she's found herself a job she loves in fashion and is making her way in the world.

She finds something she is passionate about and not only puts everything she has into it but makes it a priority in her life. By the final season, she is getting pulled between two amazing job opportunities, and she is given the choice to choose her future.

Girl went from having essentially nothing to having a big, successful career in a field she loves and is passionate about. If that's not a success, then I'm not sure what is.

Not only was her career a glow-up that women in their 20s and even 30s should aspire to, but her independence was another one. She was whiny and dependent on those around her in the first few seasons. She seemed to always need a man and her storyline focused heavily on that.

As she goes through the seasons, she begins to speak up more and make decisions on her own. She even makes her mother envious of her independent lifestyle and that she's living in New York City with her friends.

To go along with her finding her independence, her confidence from season 1 to season 10 really took a huge leap. Throughout the series, she is known as the pushover of the group.

She is constantly going along with whatever she is told to do, but fans start to see peaks of confidence throughout the series. Her first big peak is when she and Ross break up the first time because she values her job and wants that to be a priority. Her second big peak is when she becomes pregnant and decides that she's going to raise the baby, with or without the father, and by the end of season 10, she is making decisions about what she wants for her future on her own.

Her confidence is something that might not have been a prevalent plotline of her character development but it was always there and a huge part of how her character grew over the years.

Rachel Green was more than fashion and hair. She was what most girls in their 20s aspire to grow to. She was naive and young at the beginning of "Friends" and grew into a confident, independent, successful woman by the end of the series. All girls and young women should look to grow up (or glow up) the way Rachel Green did in "Friends."

I mean, at the end of the day, who doesn't want to be the founder of an iconic hairstyle, am I right?