This Quote Perfectly Explains Why "Men Need Feminism, Too"
Odyssey
CurrentlySwoonLifestyleHealth & WellnessStudent LifeContent InspirationEntertainmentPolitics and ActivismSportsAdulting
About usAdvertiseTermsPrivacyDMCAContact us
® 2023 ODYSSEY
Welcome back
Sign in to comment to your favorite stories, participate in your community and interact with your friends
or
LOG IN WITH FACEBOOK
No account? Create one
Start writing a post
Politics and Activism

This Quote Perfectly Explains Why "Men Need Feminism, Too" 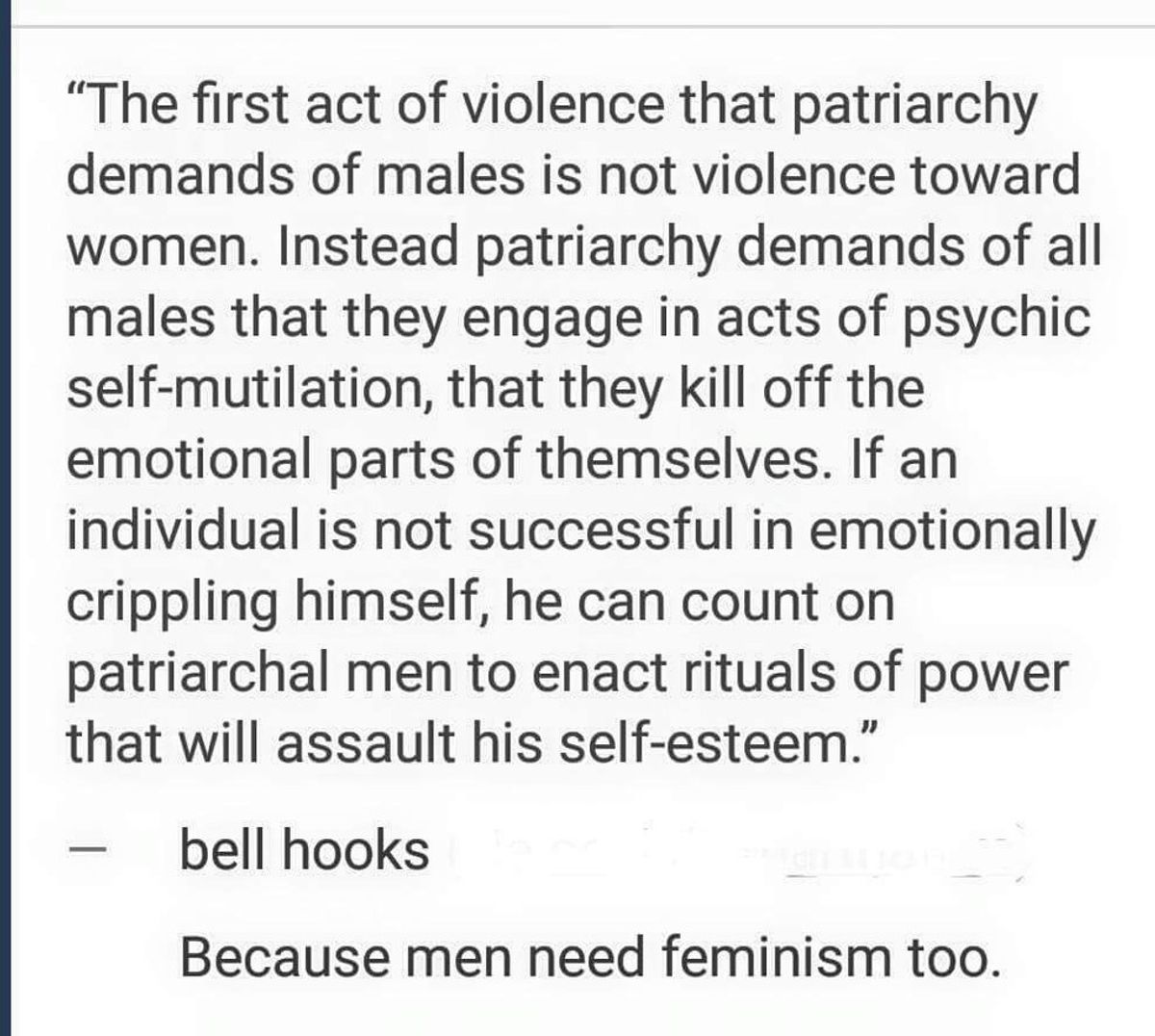 Feminism is a loaded word. Many people struggle with its history of racism and classism perpetuated by its middle-class white women originators. Today, many people associate it with some sort of social justice warrior extremism in achieving equality. Regardless of your personal feelings about a movement like feminism, you can't deny that women face disproportionate violations of their rights to men. And no matter what, that should be enough of a reason for men to stand in solidarity with feminists in fighting the patriarchy.

But if you're a man and you're still dubious about the merits of feminism's core values of dismantling the patriarchy (and lots of you are), consider the fact that patriarchy doesn't just negatively impact women's lives but men's as well. Under patriarchy, men suffer from a loss of identity—at least according to bell hooks in her book, "The Will to Change."

(cover art of hooks' "The Will To Change")

"The first act of violence that patriarchy demands of males is not violence toward women. Instead patriarchy demands of all males that they engage in acts of psychic self-mutilation, that they kill off the emotional parts of themselves. If an individual is not successful in emotionally crippling himself, he can count on patriarchal men to enact rituals of power that will assault his self-esteem."

It's a powerful quote due to its shocking accuracy and bitter truth. Think about it, guys: how many times have you been called an insult like sissy or girl for crying? For showing vulnerability in a stressful situation? For simply being human?

In a world where women are seen as inferior and irrational, man who have "feminine" traits are shamed and made to close that part of their psyche off. They are forced to become stoic and unexpressive. In other words, we men become "emotionally crippled."

Men, we too suffer from misogyny.

It's the reason why so many insults for men are woman-centric: sissy, girl, bitch. It's the reason queer men are called faggots—not only because they like men but because they are perceived to be feminine. It's the reason that mass shootings are disproportionately committed by us (white ones at that). It's why so many of us violently lash out on others and ourselves when we have a rage that eats away at our souls. In a patriarchal society, men are not permitted to show emotions that are coded to be feminine. We are boxed into strength and reliability, anger and violence. We are denied an individualistic identity and become robots in a procession of masculine pretense.

Men are just as affected by the patriarchy as women are. We internalize our weakness and vulnerability to an unhealthy degree, and thus become emotionally stunted victims of oppression. It is only through the deliberate deprogramming of our repressed emotion that we can begin to dismantle patriarchy along with women and grow as healthy, fully realized individuals. It is our duty to show young boys that it is, indeed, okay to be human.

Nicole Marie Nigro
Individual Creator
8354
c1.staticflickr.com
Where to start...... Let me start with the cliche that life throws us curveballs and what we do with it is what counts.