A simple, easy guide to help you show off at a party. 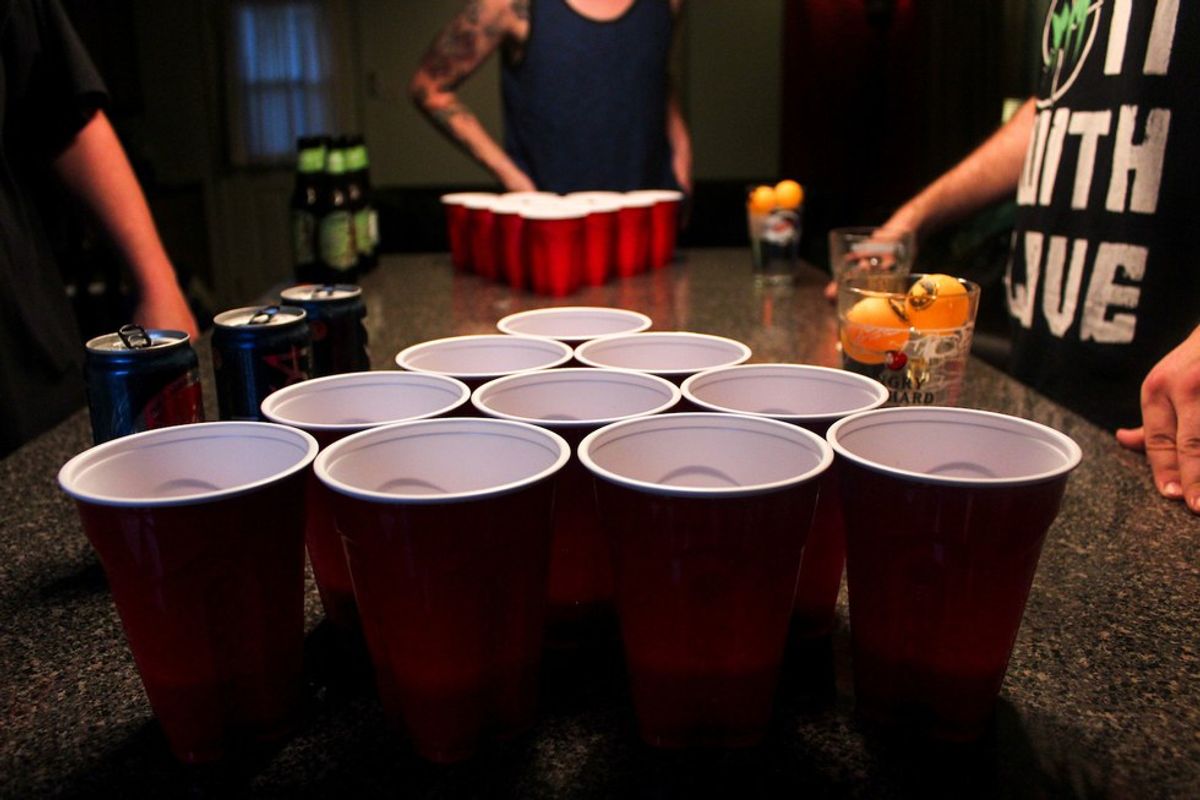 Have you ever wanted to master the art of beer pong or are you tired of getting drunk due to your lack of skills? With my elegant shelf of all-time-champion-beer-pong awards, I’ve been known to win various types of beer pong games. Many students and friends, who are tired of losing, come to me and ask how I’m so good and almost never miss my shots. With my simple guide, I guarantee you can almost always beat your opponents and win bragging rights at major parties. If you want to increase your reputation with the ladies or the college crowd, follow my steps to successfully dunk the ping pong ball where it belongs. Remember, these steps are so easy, you can consider yourself a professional after just a few weeks of practicing.

Before we begin, I’ve learned that it’s better to understand the history of what you’re trying to master before moving directly into practicing. Beer Pong is a simple concept where almost everyone can play, and almost anyone with proper practice can master the game. Beer Pong is rumored to have started from the Dartmouth College in the 1950’s with paddles being the main way to score the ball into the cup. It wasn’t till the 70’s when the concept of “throwing” the pong ball, instead of hitting it, was introduced to other colleges and parties. Beer pong is now a renowned past-time for many college students, but can also be played at many other events and doesn’t require alcohol to be a main factor within the cup.

Obtaining the proper skills for beer pong takes a lot of practice, time, and patience. Practicing beer pong is fairly cheap and doesn’t require a lot of money. I recommend getting a dining room table or something that is 8 feet long and 2 feet wide because those are the standards in many tournaments and other events. Once you have obtained the playing space, you must acquire SOLO cups, ping pong balls, and water, because we are practicing the art, not trying to get wasted or hammered. Let us begin, first and most obvious, obtain your cups, ping pong balls, and the table space.

You can get the SOLO cups and ping pong balls at your local hobby store or sporting goods store. To get the playing space, I recommend using either your dining room table or a slab of 8’ by 2’ piece of plywood that can be your base for the cups. Once you have the cups, ping pong balls, and a playing space, don’t forget to get some water out of your facet that could be used as a practicing substance.

Perfect practice makes perfect; therefore, place the SOLO cups exactly as I state in order for you to get comfortable with the playing field. Stand on any of the shorter ends of the table and by the lip of the table, place four cups going along the edge. Then, place three in between the first four cups as if you were building a pyramid. Continue to reduce the pyramid by one cup until there’s only one cup on top. Do this exact pyramid but on the other side of the table, and remember to leave one cup out to the side as a ball-washing cup for the ping pong ball.

Once both sides of the table are set up and ready to be used, get your ping pong balls out and grab a pitcher of water to fill the cups up with water. Fill the cups about half way with water, as this will give weight to the cups and make it more realistic, thus simulating as if you were playing for real. Be sure to fill every last cup on the playing table, which should be a total of 22 cups on the table. There should be ten cups on each side stacked like a pyramid and two cups on the side of each pair of ten cups. The two side cups are for cleaning the pong ball of any hair, dirt, or unnecessary debris.

You are now ready to practice throwing the ping pong balls into the cups that are across the table. Stand directly behind the cups, do not lean over the table and don’t be too far back as if you’re trying to make a 3 pointer. Relax, set one foot forward and one foot back, grab a ping pong ball, and move your arm into a perfectly shaped L. As soon as you’ve gotten your body in place, focus on one of the cups, not all the cups, but a single red cup that you anticipate to make the throw into. I recommend throwing the pong ball directly into one of the middle cups in the pyramid because they are the easiest to make and your chances of making it into a cup is increased.

When you’re ready to throw the pong ball, you have two different options. One is letting the ball bounce once on the table, and the other option is to throw it directly into the cup without a bounce. If you let it bounce on the table, the opponent then has the opportunity to block or grab the pong ball, making it their turn. Use the direct method to eliminate any chances of the opponent getting more opportunities to score than you. Now you are ready to throw the pong ball, so remember to stay relaxed, focused, and aim directly at one of the cups. Throw the pong ball lightly, as if it were an egg, but hard enough that the air in the atmosphere won’t stop it from traveling to its designated spot.

Practice and continue to throw the pong ball into the cups that are on the table. Once you have made a shot, be sure to remove the cup and rearrange the cups so that there’s no gaps in the playing field. Keep doing this until all the cups are gone and once all of the cups are gone, rearrange them back into a pyramid and do it all over again. After you’ve practiced and practiced, wherever you have free time, you will soon see significant improvements in your ability shoot the pong ball directly into the cup and gain distinguished bragging rights.

Practice like it was the real game and you’ll be one step closer to getting the other opponents drunk and even have ladies wanting to hang out with you.