Quarries Are Pouring Pollutants Into Our Air

Quarries Are Pouring Pollutants Into Our Air

Part two of a look at the unsustainability in our local environment. 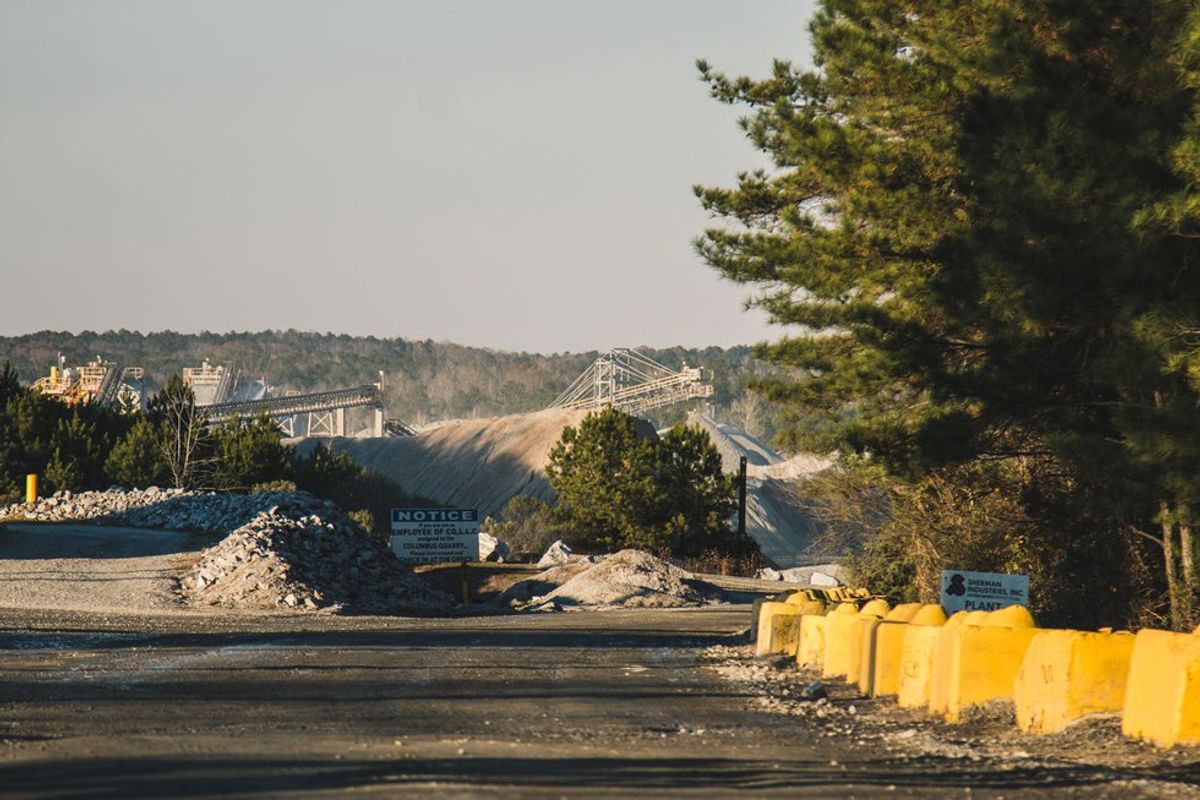 In part one of this series, I examined how dams affect naturally flowing rivers. If you missed it, check it out here.

Air pollution has been a huge concern for many, many years. The American Lung Association reports in the State of the Air 2015 that “more than four out of 10 people in the U.S. live in counties that have unhealthful levels of either ozone or particle pollution.” In the second part of this three part series, I discovered that we are exposed to tons of chemicals that we might not be aware of, and these chemicals can, and probably are, seriously harming our health.

It’s not hard to find pollution at a quarry. Located in northern Muscogee County, GA, the Columbus Quarry LLC is a granite quarry that provides “a variety of sized stone, base products and screenings for use in asphalt, concrete, erosion control and other various applications in the construction material industry,” and it’s located right in the middle of a residential area. Just a few miles away is Vulcan Materials Company, and in the opposite direction lies the Fault Line Quarry LLC. While I mainly focused on studying the Columbus Quarry LLC, all of these companies contribute to air pollution in one way or another

As I was driving down the road, I noticed a cloud of dust looming over the road outside of the quarry entrance. When I rolled down my window to take a few pictures, I was overwhelmed by the smell of burning asphalt. I also found it more difficult to breathe and I started coughing from the dust and fumes in the air. The road outside the quarry was covered in dust that had settled on the ground, and every time a car drove by, it would be launched into the air again. Not even a mile from the quarry were a group of houses. Can you imagine living near this and constantly having dust in the air and the smell of asphalt?

This was not my first time visiting the area. as a resident of Harris County, I travel this route often because it’s the quickest way to the interstate. I know that this area is always like this, and the dust cloud wasn’t just a one-time occurrence.

The dust cloud looms outside of the quarry.

As I drove around the quarry, I noticed that the roads and paths were wet, and there was water running out of the quarry onto the road outside, where it often begins to accumulate. Later, I learned that quarries use wet control systems to control how much dust from quarrying the rocks escapes into the air. Obviously, it’s great to keep those harmful particles out of the air, but the water only pushed the particles out of the quarry and into the ground around.

When viewing the quarry from Google Earth, I found that Heiferhorn Creek runs behind the quarry, so the dust-contaminated water run-off from the wet control systems and run-off from rainstorms likely washes into the creek and travels downstream. Heiferhorn Creek continues until it empties into Standing Boy Creek, which then empties into Lake Oliver, and eventually makes its way to the Chattahoochee River. Wet control systems are presented as a solution for air pollution, but if the pollution is just being transported to a different area, is that really a solution?

The asphalt plant entrance. Water can be seen flowing down the side of the road.

Another pollutant I immediately noticed was the steady stream of fumes coming from a conveyor belt tower in the asphalt plant of the quarry. Fumes from asphalt consist of chemicals such as formaldehyde, hexane, and phenol, which are all known toxins that cause serious health issues such as cancer, central nervous system problems, liver damage, and more. As I mentioned earlier, just from driving around the quarry for a short time, I began to feel dizzy and had difficulty breathing. The quarries' office buildings are located on site, so those workers are being exposed to these chemicals every day at work, not to mention the residents just down the street and surrounding businesses.

A survey found that these pollutants have affected the health 45 percent of people living near asphalt plants. The most common health issues reported were high blood pressure and sinus problems. The most surprising fact is that most plants are not tested for toxic emissions; it’s all estimated by computers and mathematical formulas, which do not accurately predict these toxic emissions. Even if it were measured, though, the Center for Health, Environment and Justice reports:

"40% of the toxins from asphalt plant smokestacks even meet air quality standards–and for the other 60% of these emissions, the state lacks sufficient data to determine safe levels”.

A steady stream of pollutants can be seen pouring out from this asphalt smokestack.

Not only is the quarry itself producing pollutants, but the transportation it utilizes produces its own pollutants. Heavy duty machinery is used to transport all the rocks from place to place in the quarry, and dump trucks are used to transport the rocks from the quarry to the customer. Fueled by diesel, the machines emit a tremendous amount of exhaust, a primary pollutant that contributes to the production of secondary pollutants and the depletion of our ozone. These dump trucks travel everywhere delivering the quarried materials, spreading their own stream of pollutants.

A dump truck on site at Columbus Quarry was left running, allowing pollutants to fill the surrounding air, which can be seen mixed in with dust from the quarry.

Columbus Quarry, as captured by satellites in 1993.

Columbus Quarry, as captured by satellites in 2014. You can notice expansion to the east of the quarry and more layers dug deeper into the pit.

Even though quarries are heavily regulated to decrease the amount of pollution emitted, any amount of pollution is damaging to the environment, as well as the human population. These pollutants are not restricted to just the direct area around the locations. They are carried by wind gusts and, as mentioned before, water. Quarries may be following regulations and permit requirements, but these regulations may not be enough to protect us from the pollutants if the amount cannot be accurately measured. Until then, our community will continue to suffer from the effects of these toxic pollutants.