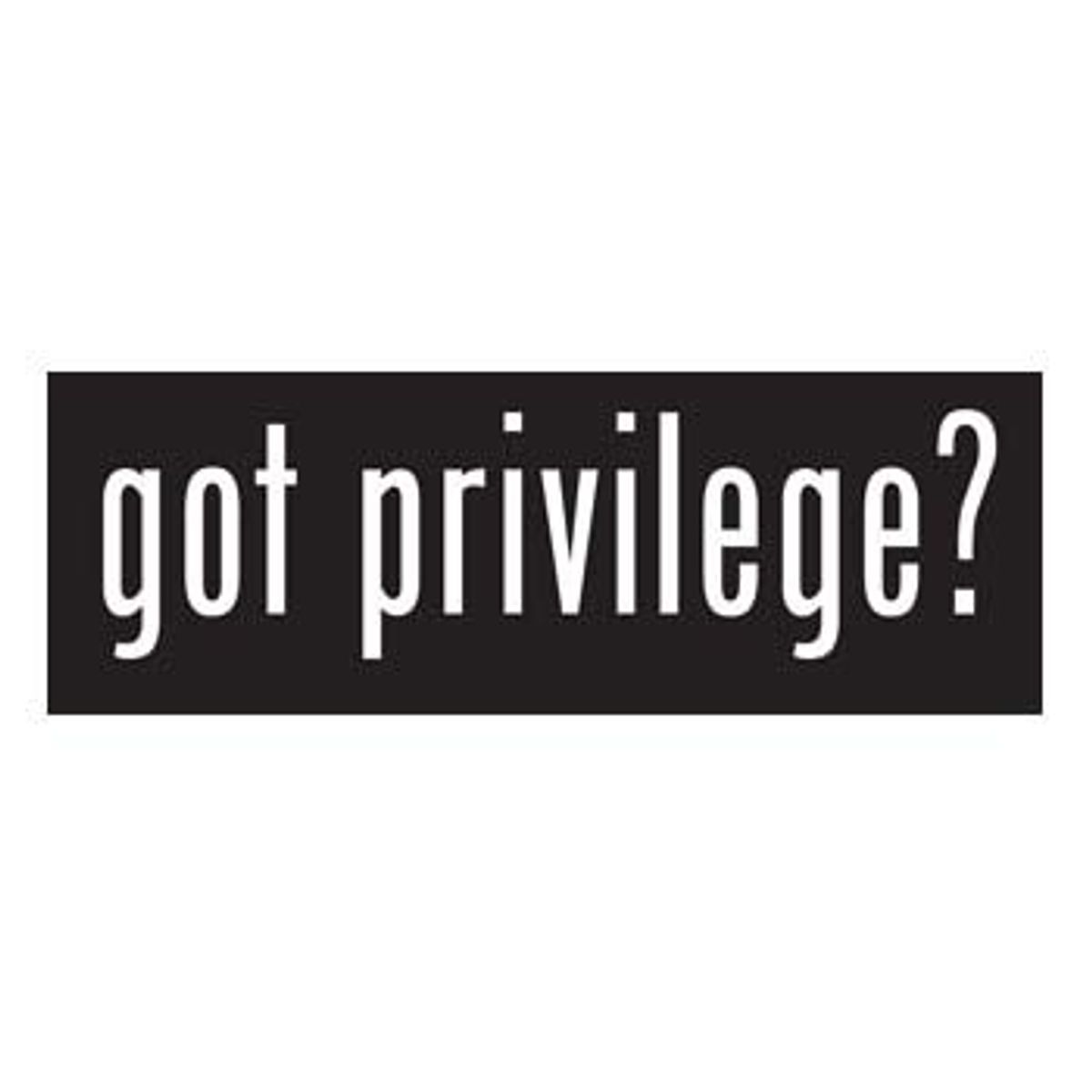 When someone typically hears the word "privilege," we expect to hear the word "white" somewhere around that. White privilege. White people have privilege. That's just another example of how white people are being rewarded for their privilege, and the like. We capitalize on white people recognizing their privilege and how they've been sustained in society today and how, in many ways, they've also been encouraged to remain "blissfully ignorant."

This is true, of course, and don't get me wrong -- I am in no way saying that white people should be exonerated from the process of recognizing privilege. It is super important that white people recognize their privilege, and I'm pretty proud of some of the small steps white people have taken as a community to make sure white privilege is easily understood by other white people and spread through our news (Deborah Foster's "A Guide to White Privilege for White People Who Think They've Never Had Any" on Huffington Post), YouTube videos (BuzzFeed Yellow's 33 Questions White People Have for White People), and even our songs (Macklemore's Macklemore & Ryan Lewis feat. Jamila Woods -- White Privilege II).

But even though these small measures have been taken, we are nowhere close to being done -- not even halfway there. And yes, you did read this correctly: we. It is not enough for white people to be aware of their privilege. In this centuries-old, ongoing war against race, it is not enough for us to lean only on the ability of one race to be "woke" to "fix it." While it does help when a white person knows of their privilege, it is equally important that I am aware of and able to recognize my own.

When I said this to a white friend of mine, he said, "What? Your privilege? But ... you're black."

He seemed even more confused. "No offense, but you don't have privilege, Jordan. It's called 'white privilege' for a reason."

But it isn't, actually. The title of this article is not "I, With Black Privilege" or "Privileged People of Color." It's "Privileged." Because privilege is not something that only applies to one race. We all have privilege. No, really -- everyone does.

Let me explain what I mean by first describing what privilege is. "Privilege" is defined as "a special right, advantage, or immunity granted or available only to a particular person or group of people." To put it simply:

Yeah, there are a lot of setbacks that I have pushing against me as a black woman in America, but there are definitely things that I don't have to think about. There are things that, should I go anywhere else in the world, I will feel entitled to:

This list was actually hard to come up with because, as I stated before, I don't usually have to think about these things. These things are already available to me, and when they aren't, I consider it a mild (or severe) inconvenience. Now, of course, I realize there are some things that I can live without, but at first thought, these are things that, without, I would consider my life very uncomfortable.

And yet, there are so many other people in the world who have to live without the things I have. So what do I, privileged, do about that?

I speak up; I speak out; I raise awareness and I do my best to use my privilege to help others; I remain grateful; and I continue to check myself on my own privilege instead of focusing just on the privilege others have over me.