One more reason to get dinner in Soho. 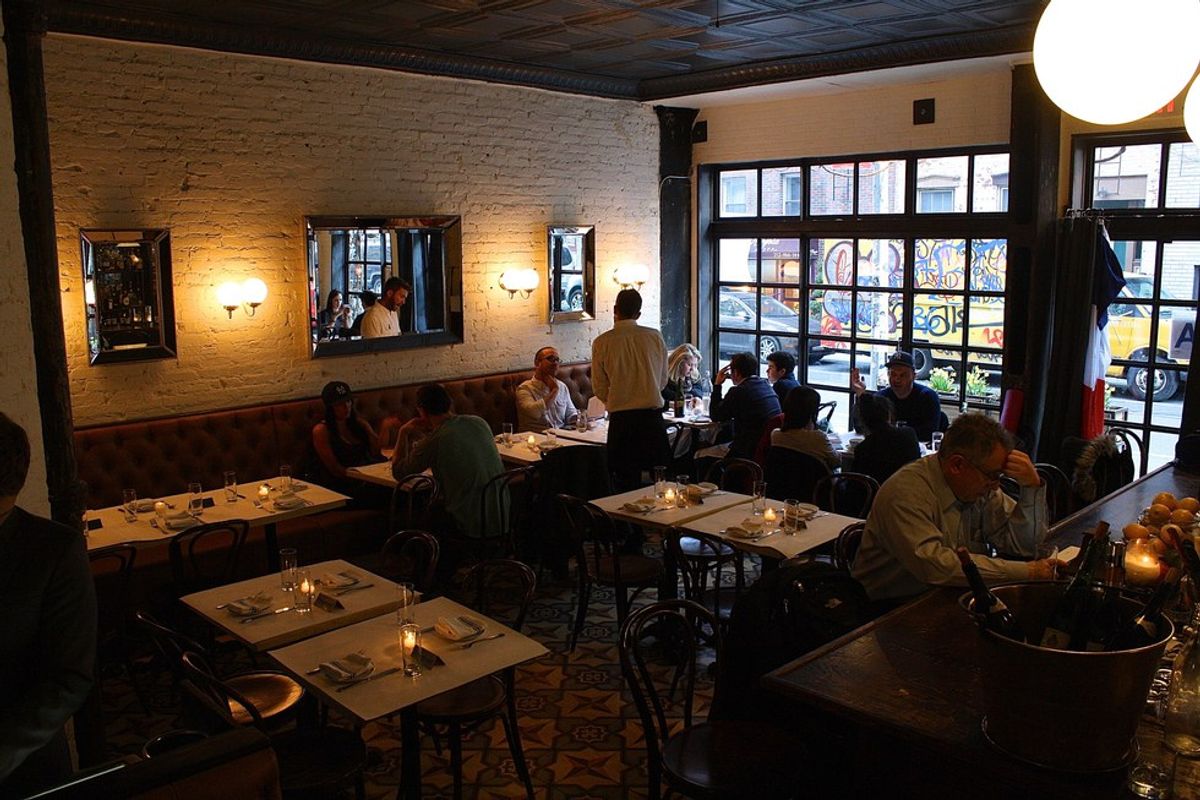 It is Friday night in New York City’s SoHo neighborhood. Hoards of people jam local eateries looking to get a drink and a decent meal, but only in a petite brick building with floor-to-ceiling windows on Prince Street do diners push aside the tables to dance to disco music or play Simon at the bar. The Little Prince is a French-inspired bistro that seats less than fifty people. Anyone who cannot find space on one of the café-au-lait-colored banquettes, delicate wooden chairs, or lofty bar stools is out of luck. In the winter, patient patrons crowd next to the small stove that flickers by the door. In the summer, they spill onto the sidewalk.

According to general manager Brandon McQueen, the governing thought of the restaurant is to put less emphasis on filling seats, and more on the experience of patrons while they occupy them.

“We let The Little Prince be whatever anyone wants it to be,” he explained.

In essence, Little Prince diners dictate the restaurant’s flavor at any given moment, instead of the other way around, and according to McQueen, the patrons that influence the atmosphere the most are their regulars.

“There’s a healthy debate that says that our regulars are a bit crazy,” McQueen said with a smile, “…but they are such a strong part of Little Prince… If they suggest things, we listen… It’s their place too.”

Polaroid pictures of frequent diners cover an entire wall at the end of the bar. McQueen could not understate the regulars’ importance and the staff’s affection for them. Sometimes, they even let frequent diners tend bar when a service gets too crazy.

The Little Prince does bend the rules occasionally, but according to McQueen, that is what makes the little bistro stand out in SoHo.

The Little Prince opened in 2013 with Chef Paul Denamiel, who is still the current executive chef of Le Rivage in Midtown, leading the kitchen. The restaurant was the long-planned brainchild of Denamiel and several investors who desired to open a Parisian-style bistro. In their design, they emphasized classic details such as hand painted ceramic floor tiles and a coiffured ceiling.

Should there be any question, the restaurant was named for its location on Prince Street, not the famous French children’s book. However, McQueen affirmed that the creativity in Saint-Exupéry’s tale is reflected in the restaurant’s food.

McQueen said: “[The] food is so balanced and uses many fresh ingredients. It’s so creative. Every dish looks like a piece of art.”

The restaurant strives to use ingredients to their full potential, even if that means stretching the Little Prince’s menu beyond classical French dishes like roast duck, French onion soup and steak tartare that form the backbone of the menu.

For example, they top a tartine, a French open-face sandwich, with avocado, smoked almonds, and Serrano chili. While the format of the dish is traditional, the ingredients are not.

However, one could argue that the Little Prince’s cocktails are more adventurous than the menu, somehow incorporating into their formulas the essence of the people and concepts that inspired them. The “Le Frida”, named after a regular, is a riff on a martini and contains vodka, St. Germain, and muddled cucumber. Another called the “Master Cleanse,” after the famous fad diet, calls for a mixture of maple syrup, lemon juice, cayenne pepper and bourbon.

The combination of a carefree atmosphere, modern food, and wacky drinks seems to work well for the Little Prince. On Yelp, past diners characterize the bistro as a “cute restaurant with a friendly-chic SoHo vibe”, or simply, a place filled with “good people, great music, and divine cuisine.” Yet, what was continuously lauded was the food with commentators describing it as “delicious,” “phenomenal” and even, “lights out amazing.”

McQueen said: “The one thing that truly makes us special is the food and our chef… I like to think that people come because of the atmosphere… but the truth is, if the food wasn’t what it is, people would choose to go somewhere else… Bottom line, the food is what speaks.”