You May Not Have Received Your Hogwarts Letter, But You Can Still Play Quidditch
Odyssey

You May Not Have Received Your Hogwarts Letter, But You Can Still Play Quidditch

A look into the Muggle world’s most magical sport. 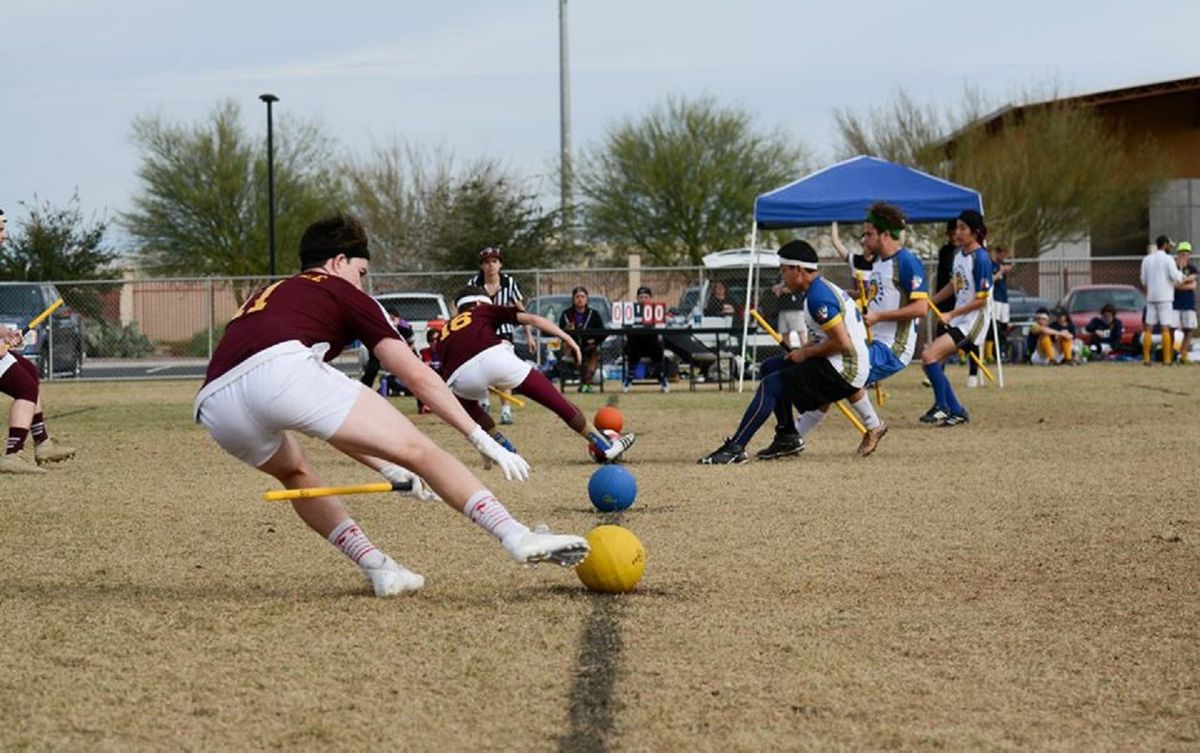 20 years ago, the world was introduced to a young wizard. 7 books, 8 movies, and 400 million copies sold worldwide later, the inescapable magic has touched lives in a way that surpasses fictitious fantasy. Our culture has become enthralled by “Harry Potter," and millennials have loved the books and movies from a young age.

But while those of us down here are still waiting for our Hogwarts letters, there's a sport waiting to bring a little magic to the Muggle world: Quidditch.

Everyone in our community has a reason for why they started; a love of "Harry Potter," pure curiosity, or an opportunity to poke fun at nerds, but regardless of why you come out, each of us stays for the same reason: the love of the sport.

So here is everything you need to know about Quidditch.

Quidditch is a co-ed full contact sport that has grown over the past 11 years into a competitive, international phenomenon made up of four magic inspired positions, 3 hoops, and over 300 teams in the US alone. It has a strange and unique mix of elements from rugby, dodgeball, basketball, and football. The game looks chaotic and disorganized at first, but once familiar with it, Quidditch is one hell of a sport to play and watch.

(And for the young ones, there is also a kid version called Kidditch)

Players on the pitch are required to keep a PVC pipe between their legs at all times in the game to replicate a broom. The PVC (which used to be a real broom before the bristles caused too many injuries) originally did start as a homage to the flying equipment used in the Harry Potter series. As the sport has evolved and grown to be more athletic, however, the 'broom' has been kept as a handicap. Soccer and basketball have dribbling to keep players from charging down the field, Quidditch requires all players to keep a stick between their legs during the game.

The sport focuses on promoting respect for each player regardless of gender identity and leveling the playing field not only in sports but in every aspect of society. This rule allows female and non-binary players a fair chance to shoot, score, hit, tackle, and generally prove how badass they really are.

Tackling has very serious guidelines to keep players safe. It can only be initiated as one-arm hits from the front and only between players of the same position i.e. Chasers and Chasers, Beaters and Beaters, etc. Players are also only allowed to come in contact with players who are in possession of a ball. Players may stiff-arm, annoy, and grapple with other players of their position without a ball but nothing more.

Each player is also required to wear a mouth guard during gameplay and either a white, black, green, or yellow headband to signify position.

Every Shot Needs a Chaser

Chasers are perhaps the most physical players in the sport of Quidditch. There are 3 Chasers on the pitch per team at any given time in a game. Their main objective is to throw the Quaffle (a slightly deflated volleyball) to score points through 1 of the 3 hoops positioned at either side of the pitch. Each goal is worth 10 points. The team with the most points at the end of the game wins so scoring is priority #1 for Chasers.

For most teams, there are three types of Chasers: The “big guy" who uses his size and weight to take down any opponent, the “fast guy" who uses his speed to evade players of the other team and get to the hoops, and finally a female player, who is utilized differently by each team and region.

Keepers basically glorified Chasers. The Keeper is the goalie of Quidditch who, on defense, has special privileges to help them block the other team from scoring. A special area in front of the hoops is designated as a “Keeper Zone" or a place in which the Keeper cannot be disturbed by other players. In the event of a turn-over and on offense, the Keeper gains possession of the ball and leads the Chasers down the field to score.

On defense, players rely on their Beaters, interference, and physicality to stop the other team from scoring.

Fantastic Beats and Where to Find Them

Objective: Gain control of the Bludgers and knock people out of the game

Beaters are the clever devils of the game. Although athleticism is definitely important, it is intelligence and strategy that drives the Beater game. There are 2 Beaters on the pitch during a game, typically a male and a female known as “Beater Pairs" or “Beater Partners." The Beaters are the first line of defense, armed with Bludgers (slightly deflated dodgeballs) they can hit any player on the pitch with their Bludger in order to momentarily take them out of the game. Players who are hit with a Bludger must drop any ball they are carrying, dismount from their brooms, and run to touch their own hoops before they can rejoin the game.

How Does the Snitch Work?

Ball: Well, it's really more of a person

While we don't have a tiny, golden flying ball to chase around the pitch, we do have a Snitch, a non-partisan player in golden capture-the-flag shorts, enter the game at 18 minutes. Seekers from either team use wit, speed, and size to attempt to grab the tail off the Snitch Shorts. While a catch in the Harry Potter series is worth 150 points, in the real-world version of Quidditch it amounts to 30 points and ends the game. The difficulty of Seeking is in the battle between players. A Seeker only wants to catch the Snitch if their team is either winning or within 30 points of their opponent to ensure their team wins after the catch. If both teams are in range and capable of winning, it is an all-out war between opposing Seekers to catch the Snitch first. Snitches come in all shapes and sizes and either run from or wrestle with Seekers to keep them from catching. Every 7 minutes a Snitch remains on the pitch, a handicap is applied to aid the Seekers. Many Seekers also play other positions for the first 18 minutes of the game to feel more important.

Which House are You?

Put away those green and red robes because I am sorry to say, dear nerd, we do not play based on the houses of the series. Both college and community teams from all across the globe rep their own team's colors and typically a name that relates to their university or well, anything else they would like.

Some teams do pay respects to our inspiration with names like The Dobbies, Horntails, and many other Harry Potter references but more and more teams are getting away from the world of Harry Potter to embrace the unique sport Quidditch has become in the athletics world. And although we take our sport seriously, we try not to take ourselves so. After all, we do play a sport that was born from a children's book (I say lovingly).

The community doesn't discriminate between Slytherins, Ravenclaws, Gryffindors, Hufflepuffs or those who know nothing of Harry Potter and have no idea what those four words mean. Players can have 20 years' worth of sports experiences behind them. They may have never thrown a ball before. They can be male, female, somewhere in between or nowhere within.

And almost every college in the US has a team!

A word of advice I received from my friend and West Regional Event Coordinator Jessica Ward to those just starting or on the fence about joining “just go to a few practices and give it a shot! You never know how it'll impact your life. It takes patience and tenacity, but every second is worthwhile."

You can learn more about Quidditch or find a team near you here.