A research paper about Marjane Satrapi's style of her graphic novel, Persepolis. 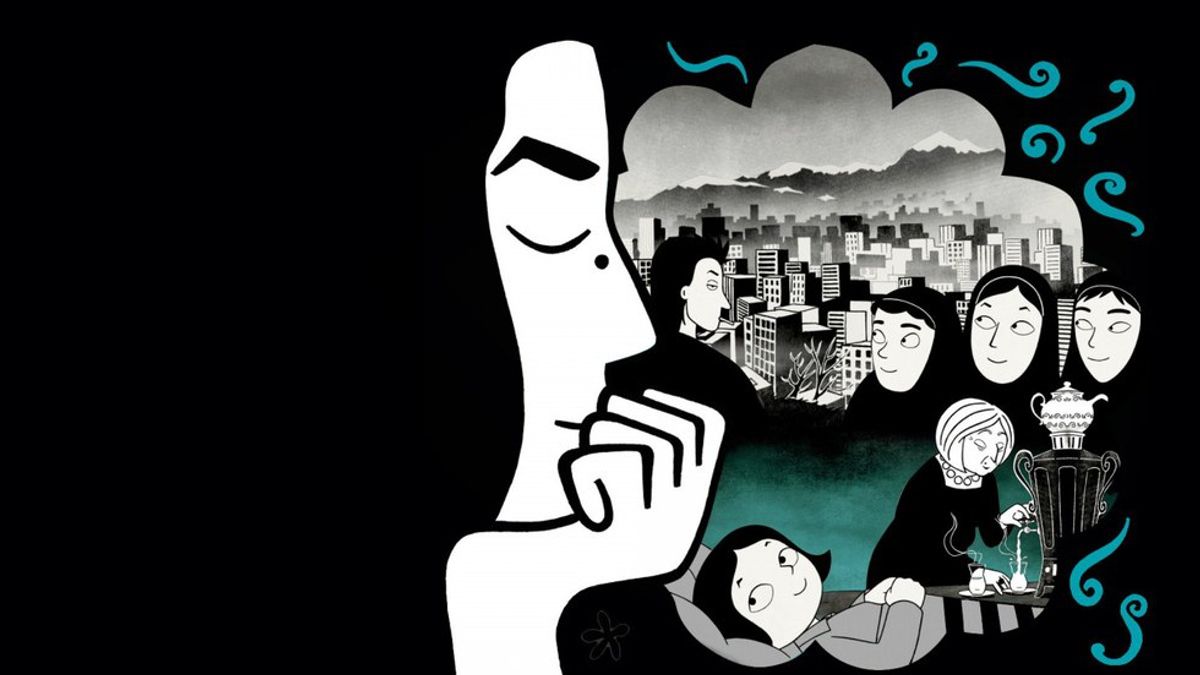 Persepolis by Marjane Satrapi is an autobiographical, sequential novel of the author’s struggles with her home country, family, and friends throughout her childhood. Satrapi also faces the horror of the wars in Iran, and their impact upon those close to her. Her minimalistic style juxtaposes the expressions with strong emotion which reveal the struggles of the people in her life. The historical context implied seems to prove enough evidence for a reader to realize the hardship of the Satrapi’s childhood. The play of words and images illustrates complex, even disturbing stories while engaging with one’s emotions.

Satrapi now lives in Paris and has not returned to Iran since 2000, when the first volume of Persepolis was published. Satrapi trained herself as an illustrator, but neither read nor drew comics until she embarked on Persepolis. The first volume shows Satrapi refining her art, mostly the pace of the comics' frames and pages. Satrapi explains to Leith, “you can't show static images one after the other—which is what I did in the first part of the first book, because I was not a cartoonist” (Telegraph 13). Her black and white drawings, two-dimensional, and the simplicity in her style became useful to the effect she aims for. "I had gaps," she says, "I never learned how to draw a body, for example, because in that art school in Iran, we couldn't learn it. I didn't have any notion of perspective. So there were many things I didn't do because I couldn't do them. But I was clever enough to take my lack and make a style out of it” (Telegraph 16).

Hillary Chute’s Graphic Women: Life Narrative and Contemporary Comics exemplifies the impact upon women’s work of historical fiction through visual media of narration. Chute describes the way Satrapi uses sequential art to exploit the culture in which the narrator—and author—grew up in and the historical instances she went through as a child. Also Chute mentions how the style stays expressive, but minimalistic so it would not represent visually traumatic experiences. As Chute mentions about contemporary comics, “there is a significant yet diverse body of nonfiction graphic work that engages the subject in either extremis or brutal facing experience” (Chute 135).

Today, veiling is a globally controversial issue and a struggle between Islam and the West, and now between modern and traditional interpretations of Islam. Veiling—of women, of men, and of sacred places and objects—has existed in countless cultures and religions from time immemorial. But veiling was a practice long before Islam and still extends far beyond the Middle East. The veil implied an expression of the sacred, as it relates to the emotional and the sensual; then the veil became involved in its sociopolitical aspects (Heath 53).

One scene stood out from the beginning of Persepolis, where Marjane talks about the picture a German journalist took of Marjane’s mother at a demonstration (5). The mother does not wear a veil on the picture to express her fighting for freedom, and wears sunglasses and a loose office shirt. Marjane was proud of her, but the mother became paranoid and decided to dye her hair and disguise herself from others for a while before she felt comfortable and safe again.

The impact does not only show itself to the reader, but also in the story itself. The picture and the result of Marjane’s mother hiding from others reveals the dangers of rebelling against society. The scene also shows Marjane’s innocence of being proud of her mother instead of worried, and further develops Marjane’s story of her infancy, being born with religion always by her side.

Another scene shows Marjane’s face almost as if speaking to the reader about her pain. A pitch black background, with few sparkles of stars and planets, indicates that she is lost in thought. Marjane seems to be floating amidst the space, no longer in the comfort of her bed. There is small text at the top and bottom, “and so I was lost, without any bearings…what could be worse than that? It was the beginning of the war.” The last bit of text shows one of Marjane’s parents shouting “Marji, run to the basement! We’re being bombed!” (71). Once one turns the page, time has passed between the last scene and the new one, and she looks much older than her previous self.

Not including the grim tone of the situation in that scene, the expression on her face causes the reader to empathize with her. Another interesting detail is that the particular scene happens to be the last the reader sees of small Marjane. The transition cleverly conveys the possibility of Marjane’s threshold between childhood and adolescence, not exactly her loss of innocence, but a breakthrough of what she formerly believed in, particularly religion.

Autographical comics by women have become some of the best sellers in the twenty-first century. The art of autobiography and graphic storytelling, particularly through the portrayal of past experiences develop the personal aspect of one’s tales, and the value the author holds dearly. Satrapi has yielded her anger upon the hardships of the world into a story where she could share a piece of her mind that once was censored by the Iranian government. Formerly a witness to revolution, she decided to start her own revolution by creating anecdotal stories involving deep and dark themes one faces throughout their life. Thoughtfully mixing aesthetics and politics, Marjane Satrapi reinvented and broke the constraints of acceptable discourse (Chute 134).