My Budgies Are The Most Loyal Pets I Know, And I Can Never Love Them Enough For It
Odyssey

My Budgies Are The Most Loyal Pets I Know, And I Can Never Love Them Enough For It

Nobody else will ever understand how grateful I am to have you two in my life. 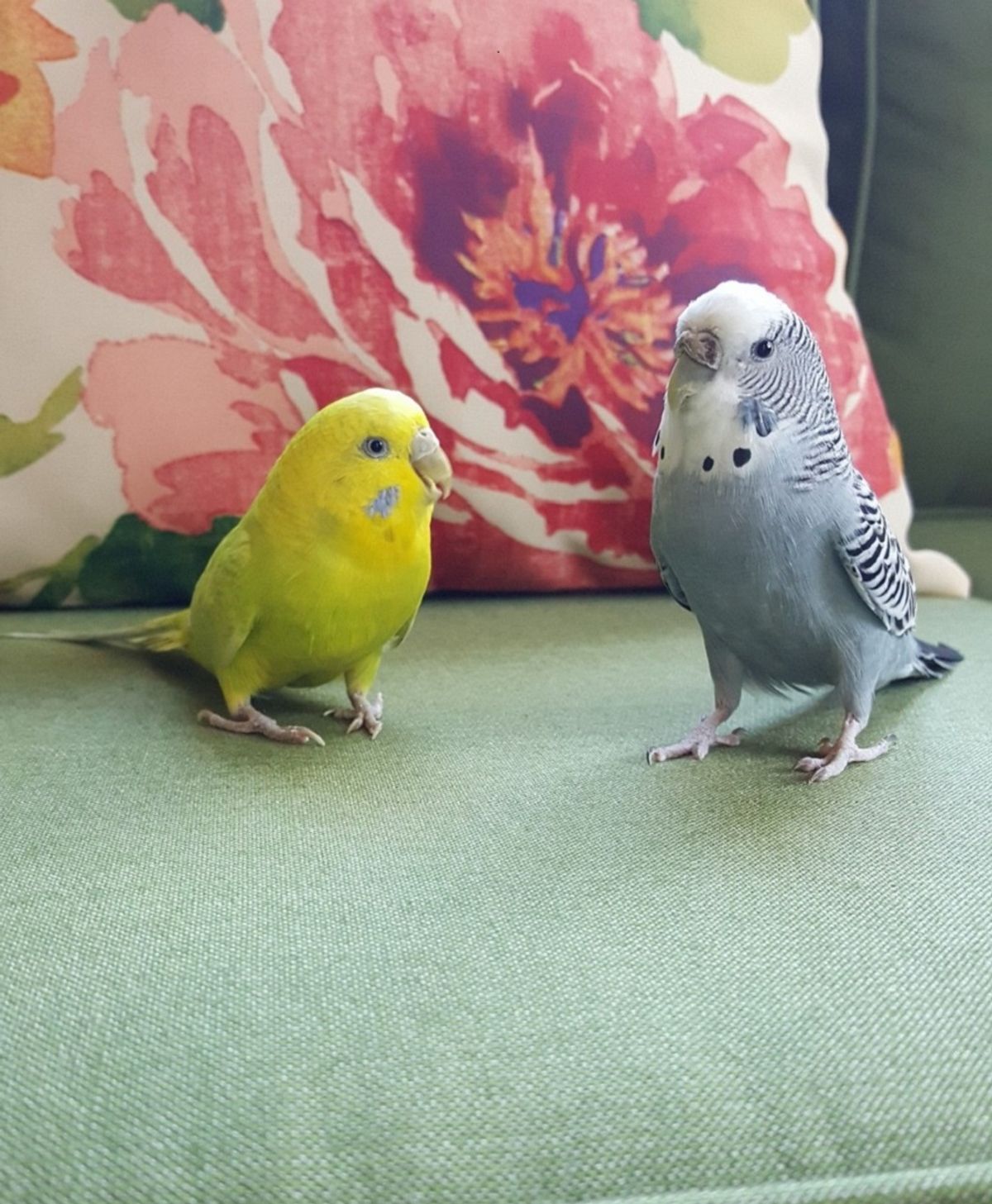 Four years ago, I became obsessed with the idea of adopting a budgie. I had just moved to a new state after living for nine years in the same place, and I believed getting a pet would help me cope with the idea of living in an unfamiliar place. The only pets I had ever owned at that time were a few koi fish that lived in a little pond in our backyard. They usually died a month after we bought them, either because we forgot to feed them or the eagles and neighborhood cats would stop by for a free meal. Koi fish aren’t exactly suitable for young girls who like cuddling with soft things.

I knew a couple of older girls who had budgies, and they were so much fun to watch in their cages because they would randomly fluff up and make cute chirping sounds. After we moved, I spent most of my time researching everything I would need to properly raise a budgie. During this time, I watched videos of owners playing with their budgies and teaching them tricks, and I was so awed with their relationships that I thought, “I want to have a birdy-ful bond with my budgie, too!”

It took a year of research and begging to finally convince my parents to allow me to adopt a budgie. One day, I had enough. There was no reason for my parents not to grant my one wish. I had covered all the bases: budgies are inexpensive, low maintenance and overall the perfect pet. I spent the whole day crying and screaming and throwing horrid tantrums until finally, my parents conceded. My mother told me this was my reward for getting good grades for so many years, but at that point, I didn’t care about the reason. I was overjoyed that I would finally become a pet parent.

The very next day, my father took me to PetSmart to choose which baby budgie to adopt. I brought a list of all of the supplies I learned that I would need to take care of my budgie and showed it to an associate so that he could bring me everything. I had prepared for a year for this day, and I was ready, to say the least.

Except for one thing.

I entered that store with the intention of adopting one budgie. However, I left with two.

I spotted the budgie that I wanted, perched at eye level. He was sitting, fluffed up with no care in the world, and he was the only budgie with gray feathers. I thought he had the wings of a fallen angel, streaked with black and white. He would save me multiple times in the years to come. I already had a name at hand for him. I would call him “Bollywood” (Bolly for short) because that was my most favorite thing at the time, and I knew he would be my most favorite being in the world.

After choosing Bolly and pointing him out to an associate, I was ready to leave. Then, my father told me to choose another budgie. I was flabbergasted.

He said the other one would become lonely, so I'd need to choose an additional budgie. I didn’t have a problem with adopting a second one, but I hadn’t planned anything out for two; I was slightly concerned. But looking back at it now, I don't regret it.

My brother got to choose the budgie. He chose a bright yellow budgie because it stood out to him, and this one was as bright as the sun. He was going to brighten up my days whenever life tried to dim them. My brother spent five minutes trying to come up with a name, but they were all generic and lame. So, I got the responsibility of naming the new budgie. I decided to name him “Lellow” because that was how my brother pronounced “yellow” when he was younger.

And so we went home with you two, Bolly and Lellow. I fed you, I played with you, I slept with you, I talked with you, I did as much as I could with you. We created a bond that nobody could break. You came to me whenever you fell off of a table so I could lift you back up (lazy bums). You would fluff up and act cute and clingy for treats. You tried to groom my hair and my eyebrows. You attached yourselves to me so that I could never forget about you. Whenever I go away on a trip, whether it’s only three hours away or three days away, I always cry thinking of whether you two will be OK.

They say, “They’re just birds. They can’t even understand feelings with their tiny brains.”

I think your brains are big enough to at least understand when I need a little budgie-sized bundle of love. There were so many times when I just wanted to leave my responsibilities behind and go far away, but then I thought, “Who will take care of Bolly and Lellow? Who will understand them like I do?” I would come back and hold you and tell you how I felt. You didn’t understand 99.99 percent of what I told you, but you were always willing to fluff up and comfort me. There were so many days that I would cry and either of you would try to lick my tears and make me laugh. Tears are not for drinking, Bolly and Lellow.

You helped me even when mere “hoomans” couldn’t.

Dogs and cats aren’t the only pets at the top of the popularity pyramid. Birds are high up there, too. The people who think birds are lame pets don’t understand, but that’s OK. As long as I understand and I keep loving you guys, it’ll be alright. I promise I’ll explain your worth, Bolly and Lellow. It’s the least I can do for you after you've kept me going these past three years.

I love you, Bolly and Lellow. You boys are the best pet sons in the universe. Let’s keep each other happy for a long time.