My best friend is older than me and here's why it works.
Odyssey

Having An Older Best Friend Is Everything And More

She's 15 years my senior, but my best friend was made for me. 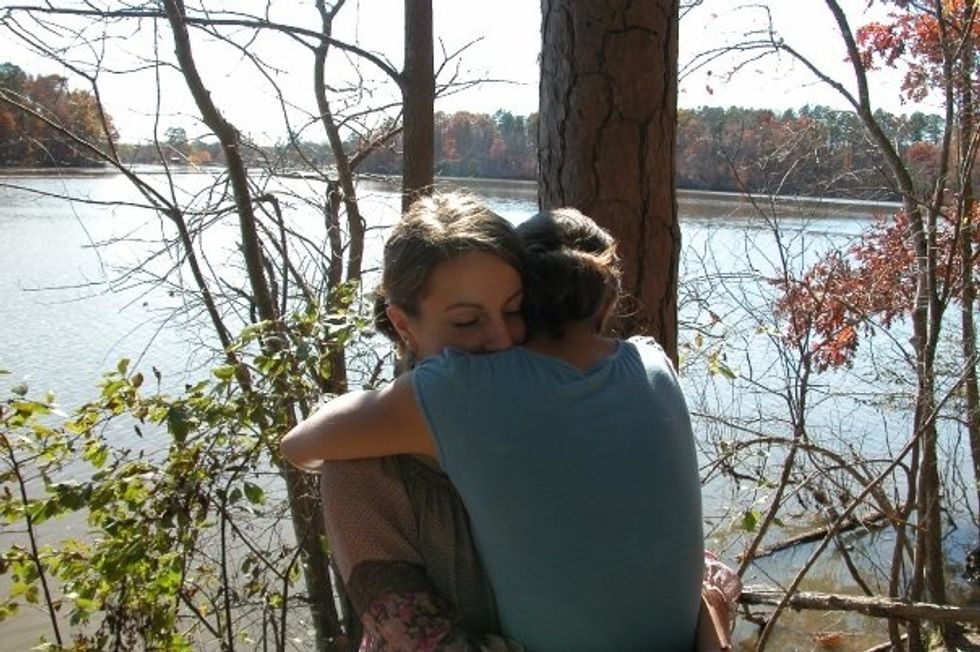 When I was a newborn, my best friend was getting her first car and applying for her learner's permit. You see, she's 15 years older than I am and even though our paths didn't cross for almost three decades, I can't imagine my life without her in it.

I first met Janie at the preschool pick-up line. Her daughter and mine were in the same two-year-old class. She was the sweet blonde who brought the teachers goodie bags and gift baskets every chance she could. She was always wearing athletic gear and heading to go walk on the track at our local high school right after telling her daughter goodbye at the gate. She wore leggings like the rest of us young moms, piled her hair into a side braid like us, and came to the school with the same exhausted yet blissful look on her face that only mamas could understand.

There was just one thing different about her: it was easy to see that Janie was older than the rest of our group, though her daughter was the same age as ours. One morning, she invited me to go walk on the track with her. My parents were keeping my son for a few hours, so I accepted her invitation and tagged along. As we walked, we discovered we had so much in common: we had both used the same contractor to build our dream home, we lived within three miles of each other, we both had the middle name, and we both loved the N.C. State Wolfpack.

In many ways, we were immediately connected and the bond was effortless.

That was three years ago, and our friendship has only continued to deepen. Janie had her daughter late in life, on her 45th birthday. It was a complete surprise that bookended a decades-long marriage based on adventure and spontaneity. She and her husband owned a small cabin in the woods long before tiny houses were a thing. Though they had another house further in the city, every weekend they would retreat to their cabin, where they'd have campfire roasts, play music too loud, and stay up far too late for people in their late thirties. Then, they discovered they were expecting. They decided to build a larger home on the property, finally pave that driveway, sell the motorcycle and RV, and start really adulting.

Their daughter was born the following August. Mine was born a few months before her, in June. They are now best friends as well. I was there when Janie got the diagnosis that her speech and crawling delays weren't just the characteristics of a late bloomer. Rather, their daughter had a rare chromosomal defect that would mean developmental delays for the rest of her life. We sat on the couch together that same evening, read as much as we could about it, got emotional together, researched options from stem cell therapy to diet changes, and left changed people.

As I write this, I have just come home from a weekend-long beach trip with Janie. She called me on Thursday, while I was getting my kids in the tub. I was knee-deep in baby shampoo, towels, diapers, and pajamas and her number popped up on my phone. "Wanna come with us to the coast for a few days? Just pack up the crew and meet us down there." Though she'd aged, she still had that child-like excitement and enthusiasm that had defined her for so long. She also knew instinctively the exact moment to call, to snap me out of my frazzled mom daze and remind me that things like last-minute beach vacations really do exist.

I agreed, and I'm so glad I did. Janie and I are polar opposites in so many ways: we missed out on years and years of life together, we weren't in each other's weddings, we never knew each other as fun-loving college kids, and we don't have any memories together in our twenties. There are things like perimenopause that she discusses and I can't chime in just yet. Then again, there are things like Snapchat that I tell her about and she just rolls her eyes.

Having an older best friend is like having a built-in mentor, confidant, and trailblazer all at once. She's been there and done that no matter what curveballs I throw her way. The best part? She never judges me, not even once, because she knows what it's like to still be figuring it all out. Luckily for the both of us, we now get to figure it out together.