I'm Not With Her
Odyssey

I'm Not With Her

I will not be diminished to a victim. 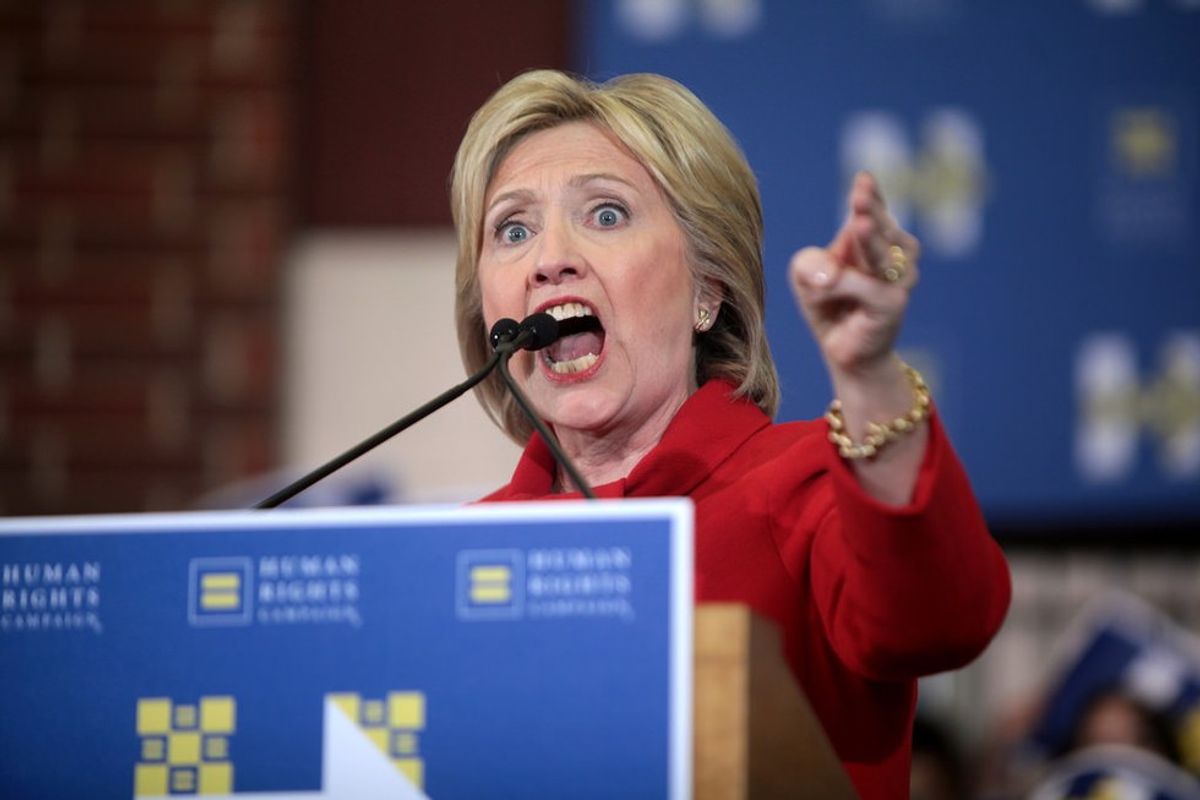 As a possessor of white privilege, I am an oppressor. As a woman, I am a victim of white male privilege. That makes me a member of the second most entitled group within our social hierarchy. The Democrats have painted me a martyr, a victim of Trump's misogynistic rhetoric and inappropriate behavior. I haven't chosen this role for myself; In fact, I refuse to do so. They insist that as a woman, I should fear Donald Trump-- but I don't. I will not fear "The Donald", nor will I be shamed for voting for the candidate that best represents my political ideology. I will not be reduced to the sum of my body parts by one man, nor will I be reduced to a victim by the campaign that Hillary Clinton ran-a campaign that insisted my biggest problems as a citizen revolved around my womanhood. And try as they might to shame me, I will not allow any Hillary supporter, Feminist or Liberal, insist my womanhood is the foremost part of my identity.

Clinton's campaign, dedicated to under-represented Americans and marginalized minorities, proved to be divisive and unsuccessful after many Americans chose to hold her responsible for the numerous scandals attributed her during her time in office. As Trump supporters traded their doubt for victory, Hillary supporters lost trust in the Electoral College, a system that awarded Trump the presidency with less than half of the popular vote. The same system outlined by our forefathers and established, in part, to limit the influence of the majority population and protect the minorities for whom Clinton and her supporters are actively fighting.

After Clinton's loss to Donald Trump, my peers took to social media to express their outrage, disgust, or general concern over human rights. I read countless exposés which, unconvincingly, asserted that the most qualified candidate for the presidency was refused the position because of her gender.

As if Clinton's womanhood was what kept her from winning.

In fact, as the feminist movement gains strength, I would argue that Clinton's womanhood gave her an advantage. So then, why are Americans most upset? Because the most qualified candidate lost, or because a woman lost? Ironically, it's almost as if we expected her to win because she's a woman.

Still, hostility and despair persist. Women are discouraged and insist that Clinton's loss is confirmation that women are not equal to men. They are disheartened by an election that, to them, has epitomized the gender inequality which runs rampant through our country and have been convinced that society doesn't want women to succeed. As a woman, I understand the concern over women's rights, and the origin from which the fear of a Trump presidency stems, even if I don't validate it.

This election has proved divisive, particularly among women. As a white Trump supporter I am deplorable, but as a female Trump supporter I am stupid. As if my vote was a blood oath, a public declaration of eternal submission to the male gender and a vow of passivity. I am stupid for voting for a candidate that goes against my best interest as a woman. As if the women who question my ability to support Trump know what is in my best interest. Those who don't understand my motives for supporting a candidate like Trump might assume that my womanhood is the principal facet of my identity. It's not.

Our society has promoted the idea that women should support Hillary because they are women. For the large majority of the population to then assume that women supporting Hillary are doing so primarily because they are women, would not be an unreasonable argument, however untrue. This school of thought is dangerous to the feminist agenda. By reducing women to the sum of their body parts, it creates a greater opportunity for female politicians to be undermined because of their gender, and suggests that women are only capable of mobilizing behind matters that directly affect them. We know this is not true, as evidenced by the many women who voted for Trump. When I cast my ballot, I wasn't refusing to acknowledge Trump's misogynistic behavior, I was saying: I am more than just a woman, I am a citizen. And I've got bigger problems.

I spent the most formative years of my life in a home dominated by independent women. My mother is divorced, grandmother widowed, and my great-aunt never married. They taught me that I need not be bound by conventional notions of female fragility and submissiveness, that I should capitalize on the independence my personal agency offers me. I was raised to be empowered not by my womanhood, but my personhood. I was not taught to cower in fear of the man, or any woman. I was not taught to victimize myself-- to lament of my sufferings and to seek out all of the ways in which I have been wronged. I pity the women who were not as fortunate as I, whose womanhood is not strong enough to withstand the sexist remarks of an egotistical man and whose personhood has been so injured by one man and his supporters, that it warrants the complete revocation of faith in the system and in our people. Our society has taught us that inequality entitles us to victimization, but I will not be diminished to a victim. I will not stand beside countless historically marginalized groups and pretend my sufferings have been equal to theirs, because I'm "disgusted by Trump's misogynistic behavior".

I refuse to be weakened by Trump's words or to begin questioning my value because a couple of his character flaws have been externalized. I will not allow his words or actions to be a personal attack. We give words their power. When you feel offended, belittled, or trivialized by others, remember that you gave them the power to make you feel that way and you can take that power away. This election has not convinced me that as a woman I am not equal to man, and neither will Trump's presidency. We, the people...we, the women have the power to stand up to the man. We can stand together and challenge hegemonic discourse on the role and identity of women. We can stand together and seek justice for those who have been physically wronged. But first we need to stand together.

Every day I am disgusted by society's tendency to oversexualize the female body, to diminish the female body to its reproductive organs, and to assign us a generic womanly identity. But today, I am most disappointed that so many women feel severely discouraged and undervalued, and can genuinely feel justified in their victimization, because of the outcome of this election. Today, I am most disgusted that so many women feel it is appropriate and productive to shame their own.