I Thought My Heart Was Broken, But It Was Just Fine.

I Thought My Heart Would Be Broken, But It Was A False Alarm

There weren't any dramatic crying sessions or days spent entirely and unhappily in bed, luckily.

Renee Pabalate
May 30, 2019
University of Illinois at Urbana-Champaign
957 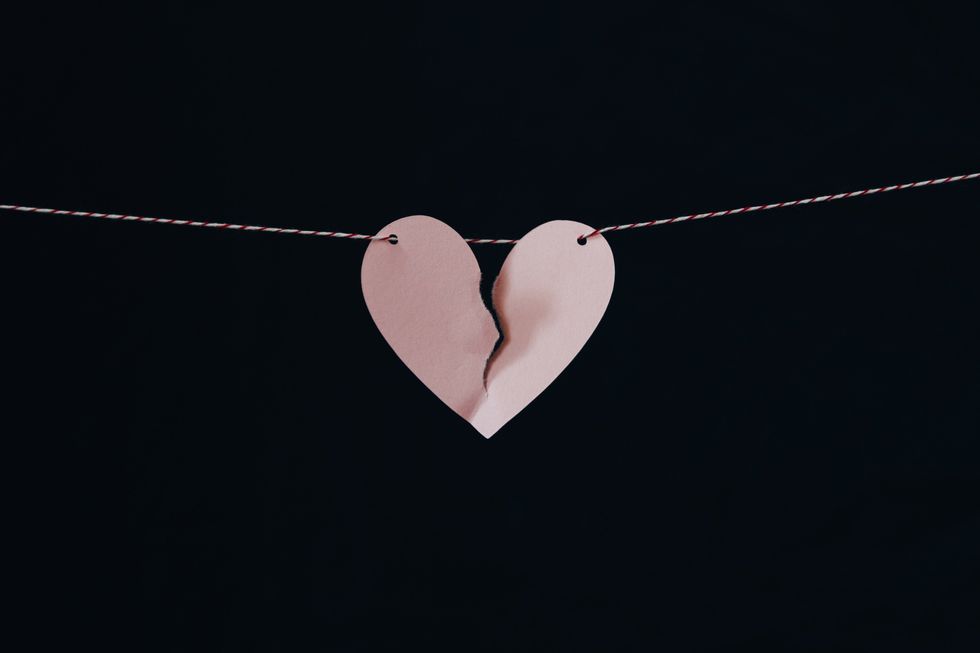 If you've read any of my previous articles, you know I'm a romance, relationship type of girl. I love swapping stories with my friends about romance and what all of our experiences have been, both good and bad. I'm really honest about this stuff, so I'm going to admit my fatal flaw when it comes to romance, I fall really easily, and it's definitely screwed me over once or twice.

Whether it was a crush I was really into despite obvious incompatibility, or trusting someone so much that I didn't see the warning signs, I just seem to fall too hard and trust too much. All that led me to where I am now, a place where I'm happy and I'm lucky enough to say I don't think I've truly felt genuine romantic heartbreak. I think I did come close a few times, though, and here's how I got past those experiences so quickly and how I look back at them now.

The biggest heartbreak false alarm I had was the summer before my first year of college. I don't want to go into details over what situation exactly broke my heart, but what is some classic teen girl angst without a boy doing something stupid. I remember being out when I found out what happened and not telling anyone I was with, expecting to cry when I got home. But, when I got home, I didn't want to cry, curse his name, or even really think too hard about the situation if I remember correctly. Sure, the initial revelation was kind of shocking, but in the end, it meant nothing. I was so convinced this boy meant something to me, I hyped him up and what he meant to me so much in my head, but when things ended, I felt fine, like nothing extreme or bizarre had happened.

Looking back, the person in question and I were never going to fit in each other's lives at all, not even as friends. I thought I knew who this person was and that any preconceived notions I had of his character had disappeared as we became closer, but he ended up meeting every single one by the time we stopped talking. I wish I could say that I'm disappointed, or wish we still talked or were in each other's lives, but I really don't. Having now met people who mean so much more to me and who fit into my life better than he ever did means there wasn't a void to fill when he left, and I'm glad. Our experiences were definitely a learning curve and I appreciate what I learned, but I appreciate more the fact that they're over.

The second and last false alarm happened a few months later, in the latter half of my first semester at college. I met someone who I genuinely liked, so when we stopped talking out of nowhere it felt like I would be sad or genuinely upset, but it was never anything serious. I just moved on kind of sad, but not really finding it worth pushing or trying to restart. I remember trying to strike up a conversation not out of a desire to be anything more, but just to be friendly, and getting blanked by him a month or so after we stopped talking regularly. Like every "left on read" moment it stung a little and thinking about how much we got along made me a little sad. I had ways of talking to him and I still do. I think some people would want closure in that situation, but I just kind of shrugged and moved on. In doing so, I ended up meeting someone who is still in my life, someone who is worth the push and effort to work on a relationship with.

I think the greatest lesson I learned from that experience is that communication is key in any romantic or even general situation regarding another person. I don't have nearly as much to say on this guy as the first one since he wasn't around nearly as long, but I think he entered and exited my life for a reason. I made the fatal mistake of building this guy up again, both in my head and to the people close to me. Somehow, I wasn't disappointed when whatever it was we had kind of crumbled. I saw my own mistakes in what we had and how we communicated. I didn't use those as ways to knock myself down but, rather, ways to confront similar situations in the future. I started to make the effort to evaluate what it is I wanted in a relationship, if I even wanted one, and learned to stop building up my expectations and remember the other person is just as human as I am.

I always expected one of those overdramatic heartbreaks you see in movies: lying in bed all day, eating chocolate, and cursing the person who broke your heart. But I've been lucky enough to not have experienced that yet. I don't know if it is just how I am or the few situations I've had that only came close, but it just seems like every time I brace myself for a heart-splitting, devastating end to a relationship, it never comes.

If you're like me, always bracing yourself for the worst, I want you to know if it hits hard that's okay. It's okay to feel heartbreak, loss, or betrayal. However, if it doesn't, that's okay too. We all have different ways of coping, and some situations genuinely aren't worth the tears or the time lost. Find your own way to heal, and never let yourself get invested in someone without being able to face their flaws or your own as well as both your expectations of the relationship. You might think you're in a world of pain, but sometimes it might never arrive, and that's always something to celebrate and learn from.