Why I Won't Be Burning My Nike Shoes

In case you've missed the news today, old, white men are pissed. Well, it's a bit more people than that. But it's mainly them. 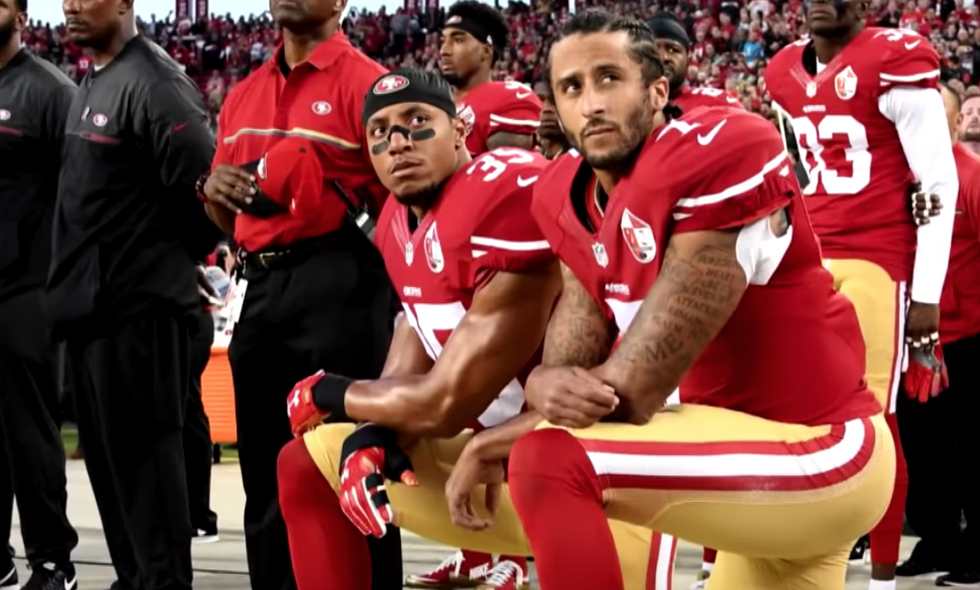 Nike just recently announced the face of its newest ad campaign: former San Francisco 49ers' quarterback, Colin Kaepernick. Needless to say, some people are a bit upset about it.

If you missed the NFL protest coverage last season, Colin Kaepernick is infamous for kneeling during the playing of the national anthem at an NFL game in 2016. In doing this, he was protesting the active threat of police brutality and racism that plague the United States today. With his celebrity status and TV coverage, he knew the power he had, and he chose to use it. Not everyone was happy about his choice of political activism, however; certain NFL fans felt what he did was disrespectful, insensitive and 'something political he should do on his own time and not during game time.' Viewers felt so strongly about Kaepernick that some boycotted the NFL and stopped watching games altogether. Consequently, in the weeks following his public protest, Kaepernick was blacklisted from the NFL.

Now, Kaepernick is the new face of Nike.

So why might this be newsworthy, you ask? So what that people are upset? That certainly isn't anything new. Well, the individuals burning their own Nike apparel would beg to differ.

Yes, someone really set their shoes on fire all because Colin Kaepernick is the new face of Nike.

People are genuinely upset about a Nike advertisement featuring someone they perceive to be unpatriotic. So much so, that they are burning their own Nike apparel. Because. Of. An. Ad. That's supporting the idea of speaking for what you believe in. Also known as the first amendment.

I think I've reached way past baffled for 'uproars' like this whole Nike scenario that's going on. It's really laughable. What difference does it make that you are burning your Nike apparel? Is it an act of defiance? Nike isn't losing any money in you doing so; you already bought the shoes or shirt or shorts. Nike won't be detrimentally affected by your choice to not purchase their products going forward. How many more buyers do you think they're going to gain from using Kaepernick as the new face of Nike? A lot. Also, if you're going to burn all of your Nike apparel, you might as well burn your football jerseys, because guess who produced them? Nike.

It's not even useful to emphasize the importance of what Kaepernick has done, the movements with which he shows solidarity, his nonviolent form of protest and the revolution he has propelled, because the people who believe that what he is doing makes him 'unpatriotic' or 'unAmerican' will continue to stay rooted in their narrow-minded beliefs. To many people, kneeling for the National Anthem will always be seen as something degrading and spit-worthy. Which is highly ironic, because it's probably one of the most patriotic things one can do. (You know, protesting against injustices that are damaging to specific groups of people.)

So, no, I won't be burning my Nike shoes (obviously, I only have one pair and they're actually pretty cute and comfortable). I'll be spending my time doing more productive things. Like eating the rest of my Sweet Martha's Cookies.

Wow, It Must Be So Hard To Be A White Conservative Christian

A Definitive Ranking Of Fast Food Sweet Tea, As Told By A Certified Southerner

What To Expect Before You Start HRT At Planned Parenthood