"I Weaned Myself Off Of Morphine With Cannabis," Says Olivia Newton John
Odyssey

"I Weaned Myself Off Of Morphine With Cannabis," Says Olivia Newton John 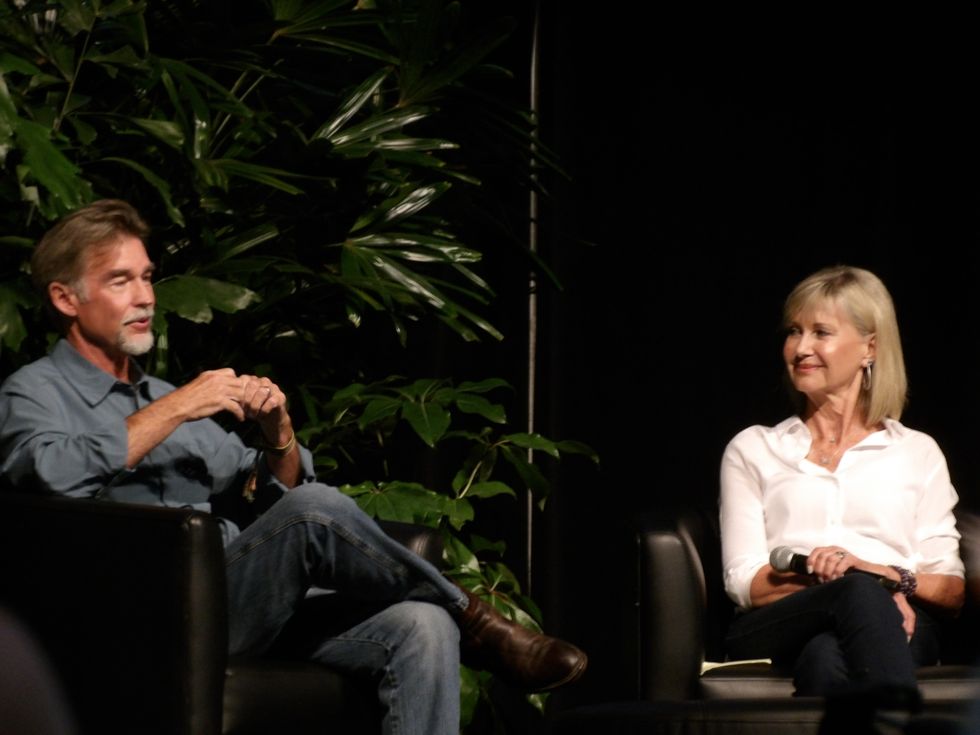 On a cloudy but warm day in Portland Oregon, Olivia Newton-John and her husband "Amazon" John Easterling spoke to a full house at the Cannabis Science Convention West 2019.

Amazon John Easterling described himself as a "treasure hunter" when he first entered the Amazon over 40 years ago. His experiences with the indigenous people of the Amazon helped to teach him about the nutrition and herbs available in the rainforest and how to use them to heal.

Easterling went on to understand that his relationship with the plant kingdom had changed. As he states, "Our bodies understand plants." He kept learning from the native Amazonians and was conducting educational workshops when Olivia Newton-John and he met.

Olivia Newton-John met Easterling after a group of her friends attended a workshop he had given. The experiences her friends had with him made her curious to meet him. At the time she was dealing with breast cancer in the early 1990s.

Perhaps one of the only people on the planet not to have heard Olivia Newton-John's music, Easterling got to know the person she is and her interests in herbal healing. When he did finally attend one of her concerts, he recognized her as a healer with a medium of music and invited her to Puru with him. They made a plan for the following year.

"I'm glad I did. It changed the course of my life." Stated Newton-John about the trip to Puru while she also suggested that we all travel there ourselves.

One of the herbs that Easterling uses to "open up the brain" is ayahuasca. Although it can make people violently ill, Easterling stated that only a thimble-full of the herbal medicine connects the user to the natural world around them as well as their ancestral line with a focus of healing.

A small soda cap-full of ayahuasca caused Newton-John to see visions of herself and Easterling in what she felt was a former life, and by the time a few days were over, they were discussing with one another what they wanted to do with the rest of their lives. Olivia Newton-John had dreams of opening a wellness center before she met Easterling, and their goals were aligned succinctly.

They "have been together since that day," said Newton-John. One year after that day, John Easterling and Olivia Newton-John were married.

None of the other people in their group had any effects from the tiny amount of the substance. After having been on antidepressants for three months having survived several traumatic experiences over the period of a couple of years, the ayahuasca left her feeling "cleansed" after getting quite ill.

"It was as if someone had taken a Windex and wiped my brain clean...I felt clear, I felt just cleansed," Newton-John shared with the audience on the edge of their seats in curiosity. "I stopped the anti-depressants immediately." She felt she no longer needed them.

"Plant medicine has TWICE in my life, changed my life...I got off antidepressants with ayahuasca." Stated Olivia Newton-John.

The other plant medicine that transformed her life is cannabis.

Easterling went on to describe the human Endocannabinoid System (ECS) and how our bodies use the plant medicine within the context of that system.

"I weaned myself off of morphine with cannabis, which I want everyone to know," Olivia Newton-John stated emphatically as the audience erupted in applause and cheers.

Having been prescribed morphine due to a fractured sacrum, Newton-John was determined not to become addicted and asked Easterling to help her with the herbal preparations she needed to deal with the excruciating pain without the help of an opioid.

"There's no reason people should be dying or going through terrible withdrawals when this is possible," she continued.

Easterling enlightened the crowd with the mechanisms behind the use of the cannabis plant for pain control, sharing further information about how the "entourage effect" uses the synergy between the substances within the cannabis plant to work within our bodies to achieve homeostasis.

"We know it is not just THC and CBD, that there's a big interface with all of these cannabinoids and, of course, all of the terpenes that..modulate the actions of the cannabinoids," shared Easterling.

To collect the plant medicine for his work, Easterling prefers a pollen screen sifting method that collects the kief before cold processing with alcohol to retain the cannabis acids or the non-psychoactive cannabinoids that are all-natural to the plant without heating. Happy Tree Microbes is Amazon John's company, helping others to grow the plants that will heal.

Towards the end of the presentation, the couple shared that not only is Olivia Newton-John free of all painkillers, but her cancer markers "are going in the right direction." They shared that she is recovering from her third reoccurrence of stage IV metastatic breast cancer, a disease that takes the lives of over 42,000 people yearly.

"She's amazing, I'm running in the airport trying to keep up with her!" Easterling said of his healing wife.

"Let's keep working with these plants and help heal people," she answered in reply to the cheers of the audience.