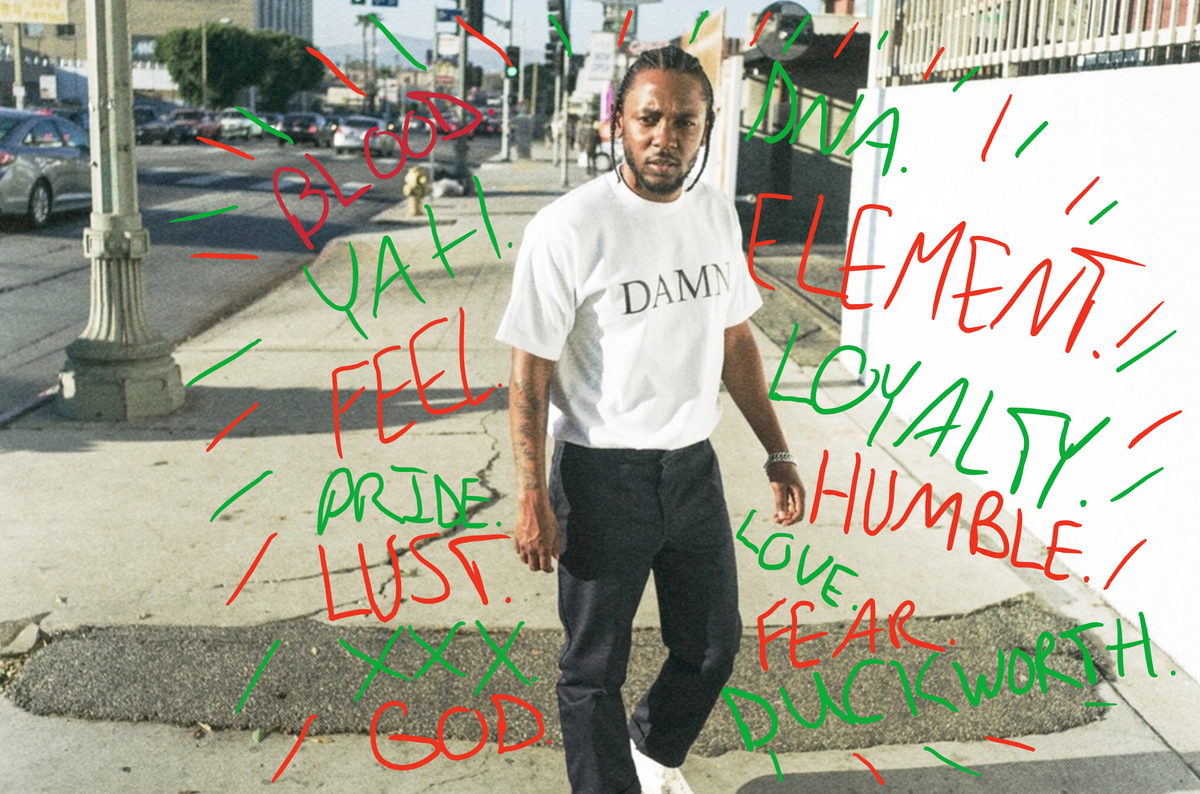 From the moment I heard "So I was takin' a walk the other day", all my attention and focus was fixed on Compton's notorious poet. Kendrick Lamar (Kendrick Lamar Duckworth) has returned with lyricism that packs a punch, production that soothes the senses, and features that bring out an artist's inner chi. Kung Fu Kenny's presence is a tap into the ancient power of rap, spewing a plethora of combos and special moves that many have attempted, but only few have executed. His exceptionally fitting fourth album Damn (stylized as DAMN.) was released April 14, 2017. A GREAT Friday indeed and a testament to his "mystical" abilities as an artist. As much as I enjoy alluding Kendrick to arcade video games, and martial arts, Damn is more than the comparison it was made out to be. It stands alone from his other projects but depicts subtle hints since his last album, To Pimp a Butterfly (TPAB). To understand a work of art, starting from the outside then delving to its core creates a listening experience of appreciation and curiosity. Thus the surface (the album cover) is the first to be explicated, because it's the primary layer that serves as a backbone for the songs that follow.

A white t-shirt, choppy beard, cornrows, and black skin culminated with look of exhaustion. How does it all correlate and what could it all mean? The man from Compton is a product of the time he's living in, yet, he has become one of the most prominent voices in our age. His last two albums (TPAB and Good Kid M.A.A.D City) were influential in the black community as well as the world. His level of civic responsibility while balancing fame has become tiresome. The exhaustion from grief, the exhaustion from critics, the exhaustion from ignorance, and the exhaustion from working to create this album has put him in a perpetual state of frustration, thus the capitalization of damn above his head is born. It's a stamp, a branded red stigma that has haunted him for the past few years. As inspirational as Mr. Duckworth is, the world moves on and all one can really do is say "damn" to the events around it.

All of that based on a cover? Maybe so, but remember, the cover is the surface. Let's dive even deeper into the songs in the fastest way possible, you ready? Bet. "BLOOD." might focus on the "fragility of life" (a good friend of mine once said). One moment you're living the best way you can, but in the next you can be taken out quickly in the blink of an eye by giving into vices and so on. The shift into "DNA." is a reminder of blood and the power it (irony) possesses particularly in the black community. Regardless of past circumstances and media perception (as included through Fox News samples), at the end of the day DNA is what you stand by (heritage and culture). "YAH." depicts a more introspective look into the Kung Fu master and is the come down after the harshness of "DNA." (shares a resemblance to Complexion (A Zulu Love), a track off TPAB). "ELEMENT." is then essential as it reassures Kendrick's hope and self-established presence as the greatest rapper in the game.

But on the next track ("FEEL.") there are doubts about himself and others because of the fame he's accumulated. It's a very personal track that then incites the need for truth and companionship. This leads to "LOYALTY." (featuring Rihanna) which established that need from "FEEL." in two forms: through romanticism and platonic relationships. "PRIDE." is then another introspective look at Kendrick and his self-gratification. Which is ironic because being "HUMBLE." is in opposition to "PRIDE." The direction of the project then spirals into the hypnotic track "LUST." (also in opposition to the next track "LOVE." which features Zacari). Essentially, the second halve of the project highlights a recurring theme of opposites, K. Dot's inner struggles as well as the world's struggles. This constant battle between one or the other reaches its lyrical climax in "XXX." (featuring U2). After the battle, the listener hears what "FEAR." really is and how it evolves as one gets older. But all of that is laid to rest because "GOD." is an upbeat testimony towards the artist's success. In conclusion, what does an artist or essayist normally do at the end of their work? Usually they summarize the whole project but not quite like Kendrick. "DUCKWORTH." literally swings you in reverse with a story that leaves you with no other word to say than "damn".

What do all of these tracks have in common? We've all been in this state of awe where there's something you just can't control. Each of these tracks make you feel that way, speechless, uttering "damn.." at the end. There's too much packed into this album to analyze it all in one sitting. If you want insight, I encourage all to listen. Damn is a coping mechanism for Kendrick and the world based on events since TPAB. What will the leading man in hip hop do next after this project is unknown, and to be honest its best the master rapper remains ambiguous, like a true Kung Fu master.