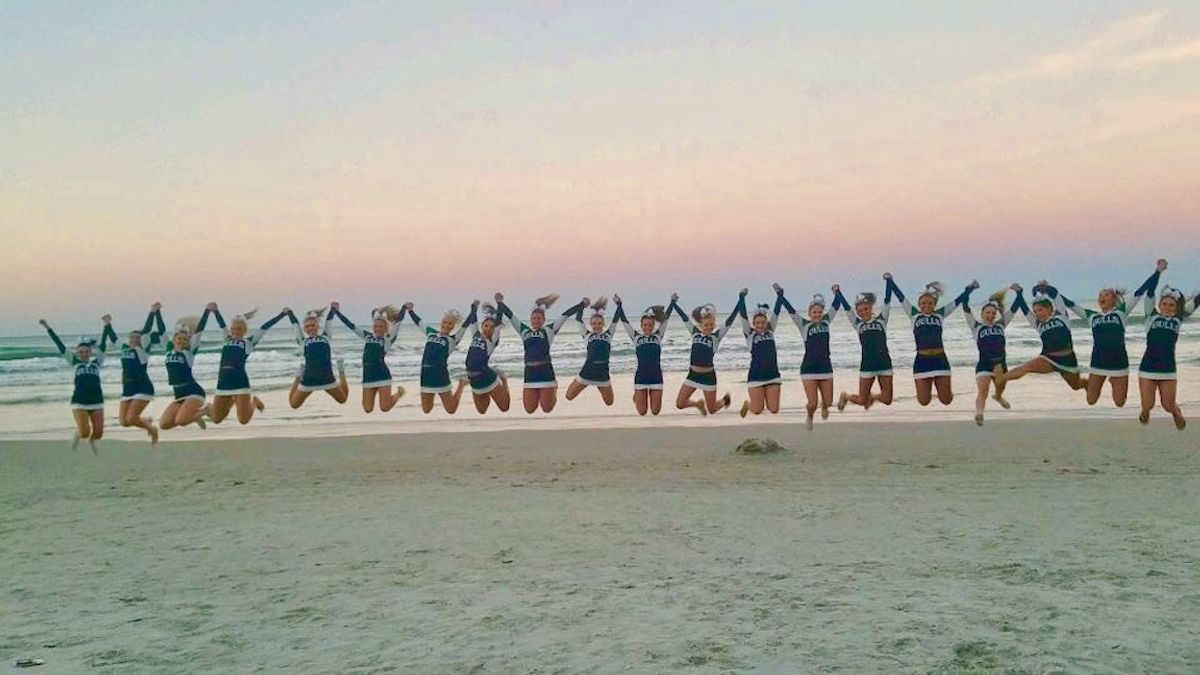 Competing at NCA College Nationals in Daytona Beach, Florida is a huge milestone in any cheerleader's career. This nationals is like no other, competing on the famous bandshell on the beach with thousands of people watching. NCA is truly an experience like no other in a cheerleader's life, and there are a few things about it that make it so truly unique.

1. Traveling with your team

Spending the day traveling to Daytona with your whole team is long and tiresome, but totally worth it. Waking up in the wee hours of the morning to get to the airport may seem dreadful, but in reality you can see the excitement in all of your teammates eyes behind their tired smiles. The airport is filled with athletes from other teams just as excited for nationals, and if you're lucky enough you might be on the same flight as another team and throw up a few stunts together before you board. The excitement of being with your whole team while arriving in Florida is truly like no other.

Ocean center is the huge convention center where you practice, warmup each day, and compete in prelims. Walking into ocean center for your first practice is absolutely jaw dropping. Teams from all over the country are practicing, throwing insane stunts and tumbling passes. All eyes are on you and your team as you begin to warmup your stunts, tumbling, and go through your routine. You push yourself and your team as hard as you possibly can to look your best in front of all of your competitors. Practicing and warming up really drives the excitement for competing. When it's finally time to take the mat for prelims, your hands shake as you begin to compete with your team at Nationals for the first time this year. The lights shining on you are blinding and the music blares as you fight to hit each stunt and hit every part of your routine in front of the wild crowd.

3. Competing on the Bandshell

This is a moment that every cheerleader waits for since she was a little girl. No other cheer competition in the world is as unique and special as NCA college finals. As you walk from ocean center, down the beach and finally approach the bandshell, the rush of emotion and energy that comes across you is like nothing else you'll feel in your entire life. Pure excitement and adrenaline will consume you as you squeeze your teammates hands backstage, and your breath is taken away when the announcer calls your name. Taking the mat and competing in front of thousands of people on the beach may be a blur, but the little moments you take with you will stick for the rest of your life.

I've always been told by all of my coaches through the years that hitting is more important than winning. Going out on the mat and giving it your all, being the best you can possibly be is all that anyone can ask for. First place or tenth place, putting an entire season's worth of blood, sweat and tears into one final routine and hitting it perfectly is one of the most amazing and surreal feelings in the whole world. The tight hugs you'll give your teammates and the happy tears that will stream down your coaches' face make every challenge you've faced in the past year completely and absolutely worth it. Hitting at NCA is truly a once in a lifetime moment.

After one of the best days of your whole life competing on the bandshell, one of the most fun parts of the day is taking picture after picture on the beach with your team. The entire Daytona beach strip is full of teams throwing up stunts, creating formations, and even championship teams running into the ocean with their banners and trophies, and nothing but pure joy on their faces. First place or tenth place, taking pictures on the beach is a true paparazzi moment as coaches and parents snap picture after picture of you and your team. These moments may fade quickly, but the thousands of memories the pictures encapture are bound to last a lifetime.

Stuntfest has to be one of the coolest things in the entire cheer world. After a long two day competition, cheerleaders from colleges around the nation come together on the lawn outside the Hilton and stunt together for hours. There's not a second where a stunt isn't being thrown up in the air, or someone isn't throwing an insane tumbling pass down the middle of the courtyard. Whether you and your team actually participate in stuntfest, or even just watch from the beach, it's one of the most amazing things you'll ever be apart of in the cheer world.

Though you and your team have spent an entire season together becoming a family, nothing will ever compare to the bond created during the few days you spend together in Daytona. When you're not practicing or competing with your team, you're going to the beach together, eating breakfast, lunch and dinner together, walking the Daytona strip together, shopping together, doing one another's hair and makeup, and spending hours in each other's hotel rooms having late night dance parties, ordering pizza, sharing memories and hanging out on the balconies. Though your time together in Daytona is only a few days, the memories you make with your team are bound to last a lifetime.